NovaSquirrel wrote:I feel like Kirby-style running may feel out of place in a game that has more Mario-style platforming.

Is the platforming in The Subspace Emissary "Mario-style" enough? If so, "Press Twice to Dash" when using a Wii Remote.
Pin Eight | Twitter | GitHub | Patreon
Top

Double tapping to run is implemented (but not enabled in that build) and it's definitely going to be an option. I don't think it'd make sense to have as the default, though, especially when the previous game didn't.
Top

It would be great if this could end up creating a SNES homebrew scene, because currently there isn't one.
Top

With most of the engine done, I'm back onto having to do design work to move forward.

I've been playing around with enemy design and I've got some enemy behaviors implemented. I'm still experimenting, and I want to give the rabbit a much more interesting behavior than just following the player, for example. I don't think I'm having a Goomba-alike again unless it's very clear you can jump on them, because the previous game having different game mechanics for only one enemy was not good design. That's why I have a slow version of that fast Sneaker enemy.

I've also been putting more work on picking out what copy abilities I want. I'll be keeping the important ones, but probably getting rid of or reworking a few. Maybe I'll keep those a secret for now.


Erockbrox wrote:It would be great if this could end up creating a SNES homebrew scene, because currently there isn't one.

It would be wonderful if my game served as an inspiration. I feel like there's definitely people out there who are passionate about the SNES and who are willing to learn assembly (and pixel art if needed). I also still 100% believe that anyone who's written an NES game could write a SNES game if they wanted to. They have most of the required learning done.

Honestly that's probably the whole point with Nintendo designing it as they did. :p
Top

It would be wonderful if my game served as an inspiration. I feel like there's definitely people out there who are passionate about the SNES and who are willing to learn assembly (and pixel art if needed). I also still 100% believe that anyone who's written an NES game could write a SNES game if they wanted to. They have most of the required learning done.

In other words, you need a bigger budget and bigger team for making an SNES game so maybe that is way you don't see them as often as the new NES games. I've been told that a single person can make a NES game if they really want to. But you could always make an SNES game look 8-bit and not have such a big budget, who knows. But you just don't see that many new SNES games.
Top

To try to quantify this: The obstacle might be the organizational overhead in hiring others for a project whose scope exceeds six person-months, or it might be that demand from end users for a retro console game is insufficient to fund more than six person-months of wages.

Yeah I suppose it's saying something that I'm intentionally using SNES development to give me a longterm project that will keep me busy outside of work, alongside just passion for what I want to create. Cave Story being made by one person is a big inspiration for me, and I don't really mind taking 5 years (like Pixel did) to make something I'm really truly proud of, if that's what it takes.
Top

There's more than one SNES project underway at Mega Cat. Not much I can say yet, but if you hit them up at conventions you can play early builds.

As for NES-looking SNES games, what'd be the point? The audience will, rightly, point out it should have been on the NES. For art-limited programmer folks there might be usable, better looking assets at opengameart to make a pretty demo, kinda like Twin Dragons the competition build was. Extending to a bigger game needs an artist again though.
Top

I support your SNES project 100% and one day I would like to use your tools and make a homebrew SNES game too. Thanks for working on this project.
Top 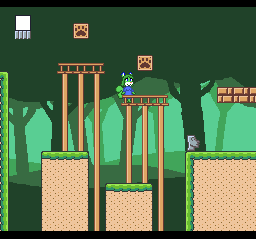 I've got some level decorations now and they really help bring out the aesthetic I wanted. 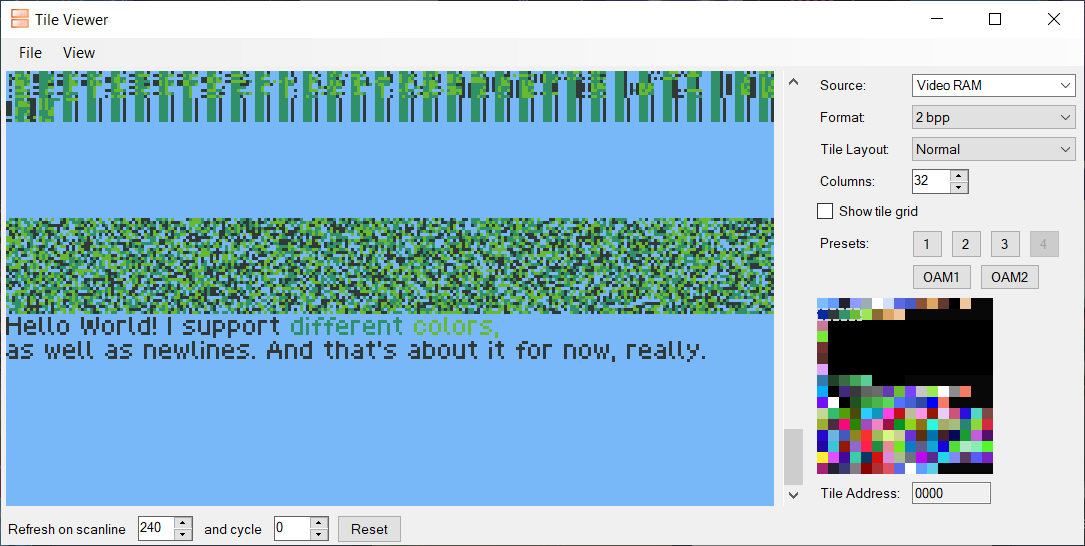 I've started on some variable-width font code. I'm planning on having rich text support with different colors (already implemented) but also different font sizes and bold/italic if I can get it. I don't know if I'll stick with this font but it was already in a useful format, which helped me get things going. 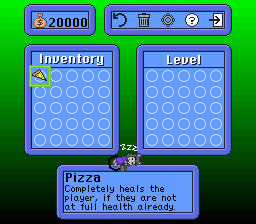 Here's a mockup for the inventory screen; it's going to have icons and descriptions unlike the last game, with Maffi riding along in the player's inventory for plot-related reasons. I dunno if I'll have this as the background or do something else either.

I've also been making huge progress on actually figuring out a story I'm actually happy with, so I'm excited to work on that too.
Top

Love the progress that you are making with this. Again if you allow people to use your SNES homebrew tools to make their own games then we might start seeing a some really cool new content for the SNES.
Top

I implemented most of the actual functionality for the inventory screen, and you'll notice that I added a text effect to double the size of glyphs. There's another option for doubling it vertically as well as horizontally, and I think that could be fun for representing shouting and other things. I still need a background of some sort on here, maybe a simple gradient or something cute like the animated scrolling backgrounds in Tetris Attack, as long as it's not too distracting.

Now to actually implement the concept of an item in the first place. :p

One interesting thing is I'm actually using decimal mode for the money amounts! It feels really weird to do that after having it unavailable on every previous game of mine.
Top

The small font looks nice. I have something similar in ZX81 Hero/Beamrider (in black and white, which looks quite okay on real CRT screens).
I just wonder how it will look with PAL/NTSC composite artifacts, especially when using colored text/background. Could that be a problem?
Maybe I am too worried there. There seem to be quite some SNES games using fonts with 1pix width. When passing video through a modulator it would help to use bold fonts with 2pix width, but with composite it might look okay with 1pix width.
homepage - patreon - you can think of a bit as a bottle that is either half full or half empty
Top

Proportional font indeed looks OK through composite so long as there's enough luminance contrast between the foreground and background.