Just wanted to drop by and say that this looks very promising!
Maybe the animations could be more dynamic and impactful, but I know from experience that when doing everything yourself,
you have to draw a line somewhere, because else, the game would never get done.
Top

d4s wrote: ↑
Sun Feb 09, 2020 4:48 am
Just wanted to drop by and say that this looks very promising!
Maybe the animations could be more dynamic and impactful, but I know from experience that when doing everything yourself,
you have to draw a line somewhere, because else, the game would never get done.

Thanks! I do want to go back and touch up the animations at some point, but due to the sheer amount of art involved I want to wait until I'm better at pixel art, so I can get better shading and such in at the same time.

Another potential issue is that I don't want animations to modify the hitbox of the player too much, since that sounds really annoying.
Top 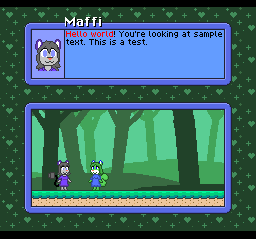 I have most of a dialog engine implemented! I can have any number of arbitrary 2bpp images as the background, put level blocks and text on top of it, and then place NPCs (who are automatically converted made into 8x8 tiles from a PNG, skipping empty tiles).

This dialog screen is actually the first place I'm using windows so far, to disable the scrolling background for the rectangle that the dialog picture takes up so that the 4-color background underneath can show through.

I also drew a Nova portrait I'm happy with, for dialog purposes.

I'm also now actually compressing some things with the LZ4 algorithm. I can tag any tileset/graphic as being compressed and it'll all happen transparently when that tileset is loaded.

I've been playing around with enemy stuff a bit, including a new fox enemy that behaves more creature-ish, and indicators for when a cannon is about to fire, in the form of a spinning small version of the ammo.

I intentionally put the ice block "bug" back! Last time I just "forgot" to put code in to fix it, this time I had to actually check for the circumstances that caused it and make it happen.
Top 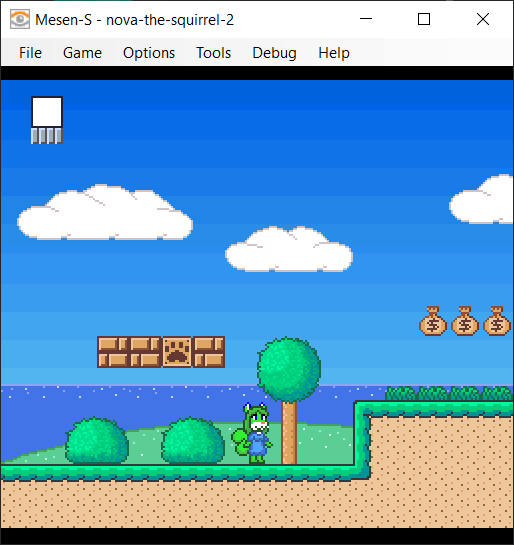 I've been playing with HDMA a bit, including some parallax scrolling.

I played around with color math for a translucency effect, trying to make a better attempt at colored glass than in Nova the Squirrel 1, but I'm still unsure how well it turned out. I tried averaging the layers but adding seems to work better.

There's also the ability to reorganize items on the inventory screen and some locks and keys.

I tried a Lakitu-like enemy, using the same priority quirk the NES has.

Pushable blocks from the first game return, as well as versions that clone themselves up or down and versions without gravity.
Top

Your work is absolutely outstanding! Some of the best SNES homebrew that I've seen. You are a brilliant coder! All I ask is the following:

1) Do a physical release of your Nova 2 game on kickstarter.

2) Allow anyone to use the engine to make their own games and make the engine super user friendly and easy to use.
Top

Good idea, that way I can make New Super Mario Land 2 very easily without any programming knowledge uwu.
I have an ASD, so empathy is not natural for me. If I hurt you, I apologise.
Top

You did an awesome job, I would like to see a "Nova the Squirrel" game on the Game Boy.
Top

I'm planning to, either after the SNES one is all done, or once there's a lot more progress on it.
Top

I'm planning to, either after the SNES one is all done, or once there's a lot more progress on it.

Do you plan to have SGB and/or GBC support?

The latter would be awesome so that I wouldn't have to experiment with button combinations to see which palette fits best on my GBA, and the former would also be awesome, especially for things like maps and HUDs.
I have an ASD, so empathy is not natural for me. If I hurt you, I apologise.
Top

Yeah definitely both. They're both very easy things to add.
Top

With that level of color degree, Have you thought about using mode 0 with 4 layers of background?.
Top

A single extra background layer is not really worth sacrificing 4bpp graphics in my opinion.
Top

A single extra background layer is not really worth sacrificing 4bpp graphics in my opinion.

Of course, i meant about how much 4BPP is harnessed (i've learned a new word xD) to determine if it worths or not to you.

I see tiles that seems not to have more than 3 or 4 color for tile, i assumed that to say something could serve for some kind of inspiration, or so, it never knows.

Look, mode 0 with its 4 layers at 2BPP, and these look good. 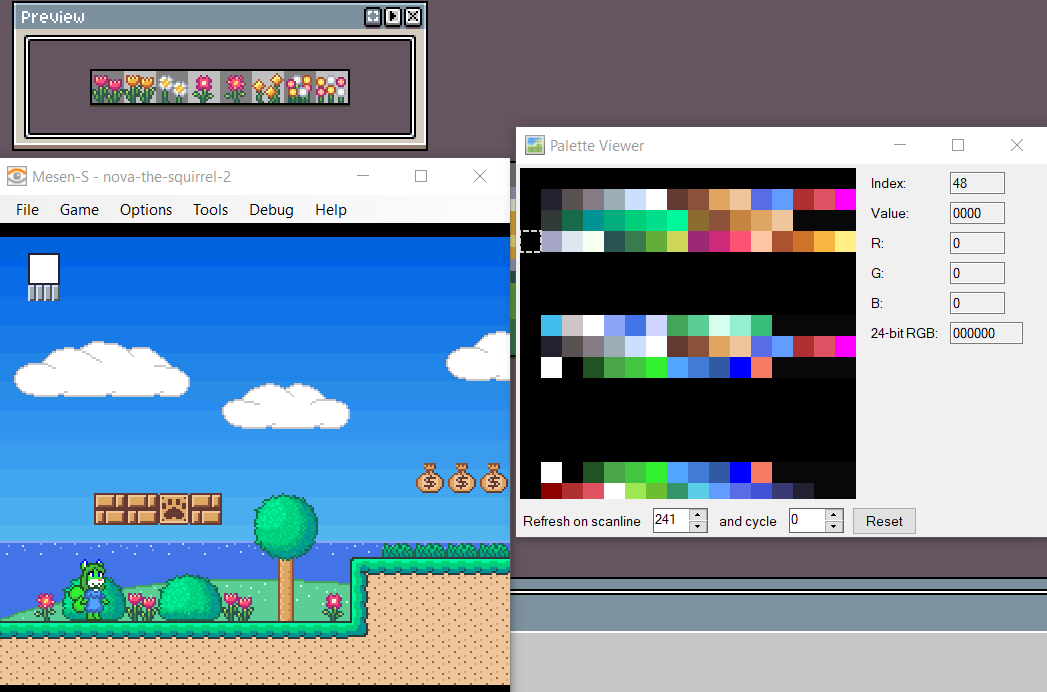 Guess I need to work on making better use of 4bpp then. Starting out with adding some better flowers that actually have their own palette, and I'm gonna try and start filling the background palettes up a bit more.
While I'm at it I made it so that grass animates a bit when you step on it and earlier I implemented arrow blocks and crates from the previous game (inspired by Hannah and the Pirate Caves), as well as boulders. 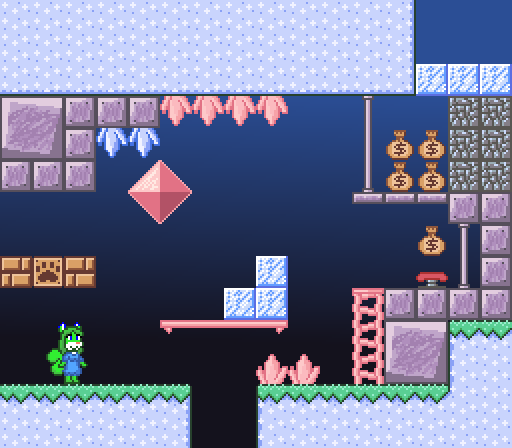 Here's a mockup for a crystal cave world, with some Cave Story aesthetics in there. I'll add a background later.
Top
Post Reply
59 posts