koitsu wrote:Is there a reason nobody is making a save state of things before the ending? If so, what is that reason?

Here's a sav state after the battle.

Your updated SRAM file did the trick, and I was able to finish the game in Nintendulator. 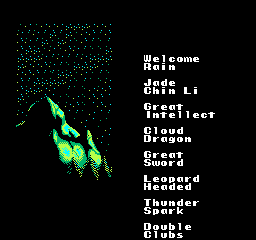 The names on the right scroll upwards, the mountain stays in place (since it's made of sprites), and the stars on the left animate upwards but otherwise stay in place if emulating in "CL mode" (which is my default); if I recompile my mapper DLL to run in SL mode, the stars do not animate at all.

Given that the BKAC cartridge was apparently wired in CL mode (at least in the photo on NesCartDB), I suspect the animating stars are "intentional", and the mountain was made of sprites to prevent its tiles from also animating in the same way.
Quietust, QMT Productions
P.S. If you don't get this note, let me know and I'll write you another.
Top

Took me far to long to get this to work (mostly because I'm an idiot), but finally managed to get to the end credits and I get the same behavior as Quietust (for both CL & SL modes - which I was not even aware was a thing). At least, assuming the stars really are meant to scroll up in such an unnatural way...

Edit: And thanks for the save file! I actually had tried to figure out cheat codes and the like to try and get to the ending a long time ago (after reading this topic), but I had given up relatively quickly.
Top

Shortly after exploring this, I found an original cart on ebay for cheap, listed as broken. Bought it, cleaned the pins, and it worked first time.
Unfortunately, I didn't realize MMC5 doesn't work either Game Genie nor the kazzo for writing save RAM, so I left it alone until this week.
I happened to notice that INL's latest programming software now works with both my older INL kazzo and that MMC5 work RAM support was added. I had to build it myself, as the current release doesn't include the change, and even after doing so, I couldn't get my RAM to match exactly what was in the file (always has at least a few errors when writing, and quite a few sections don't match). But I wrote it a dozen times in a row, plugged it into my NES and enough of the bytes were correct to load and beat the game as described in previous posts.

TL;DR
To confirm correct behavior: Here's my original cart showing the split screen, matching the behavior described by Quietest and Sour. (Didn't record to the end where all scrolling stops and a shooting star goes by, but the behavior is clear):
https://youtu.be/f84JRtV1_HE
Top

I bet that star effect (appearing exactly that way) could be done without any mapper at all. It's a 12x16 tile area getting redrawn.