Been hoping this would appear for a long time now. I'm excited to finally hear the music from it especially.
Top

Looks better than I have expected(I think all we got before was a screenshot with the menu icons on the left), especially with the not-so-tiny navigation map while scrolling through the field, making it a "16-bit like" game. I bet that eats most of the 64-sprite bandwidth already (maybe they use 8x16 sprites).

I think apart from favouring the SFC version over it, another possible reason for it not being released is manufacture cost. It's (almost) certain that the cart contains extra RAM (probably with battery backed-up portion for saving too) as the internal 2kb work RAM couldn't be enough for its random destructible constructible terrace. It's just not a good commercial deal to release something like this near the end of the console's life.
Top

Yeah, it looks suprisingly good! They did a really good job on the interface.

The minimap/lookaround solution seems unique/visionary, even if it is derived from the problem of porting the game to a console with a feature set not designed with this type of game in mind.

It would have fared better if flashROM had been a commercially viable thing for the NES. Apparently it was invented by a toshiba employee in 1980 and made available in 1984, but must've cost a lot.
http://www.frankengraphics.com - personal NES blog
Top

I've been waiting for this too! I couldn't hear the music in the video though, because of the loud commentaries.

Now if they just got it dumped.
Top

I feel like there should be some way to search the FFTs of the audio for things that match the spectrum of a square or triangle wave, to reject all the useless commentary, but I have no idea how to implement the search portion...
Top

Well, despite the commentary, the music seemed sonorous and triangle-wave-heavy, almost as if the square wave channels had been subdued or muted.
http://www.chrismcovell.com
Top

Wow, it's been a phenomenal year for retro-gaming.

-Nintendo Playstation prototype #1 working.
-Starfox 2 retail version release very soon (but not holding my breath for major differences from beta version).
-Sega Saturn console booting from a USB flash drive by tapping into video decoder card slot.
-64DD North American retail version found at a garage sale (one of a kind).
-And now this NES SimCity game I've long since given up on ever seeing.


stuff I still hope yet to be found?
Dragonfly (SNES)
KI2 (SNES)
...Any squaresoft SNES CD prototype like Secret of Mana or Chrono Trigger???
Top

lidnariq wrote:I feel like there should be some way to search the FFTs of the audio for things that match the spectrum of a square or triangle wave, to reject all the useless commentary, but I have no idea how to implement the search portion...

There's some expensive software called Melodyne that works on this kind of principle to separate pitched sounds.

I did some experiments with similar a few years ago. I got some very rough separation of tones and noise, and it could try to identify chords etc. but I think there's a ton of refinement work on how to detect/select/separate tones that needs to be done before it's past the basic proof of concept stage. Even Melodyne isn't really as good as the cherry-picked examples in its ads makes it look, but I was quite impressed with how far beyond it was from the basic stuff I was doing.

Dunno if anyone's tried to make the GIMP equivalent of Melodyne yet, though it's on my list of projects that may someday become interesting enough to me to take priority again.
Top

I'm hoping someone dumps this (or repros it). I'd love to see it.

It doesn't look nearly as complete as I was hoping. Is this just an early prototype?
nesdoug.com -- blog/tutorial on programming for the NES
Top

For the impatient, there is an open-source city-building game for the GBC: 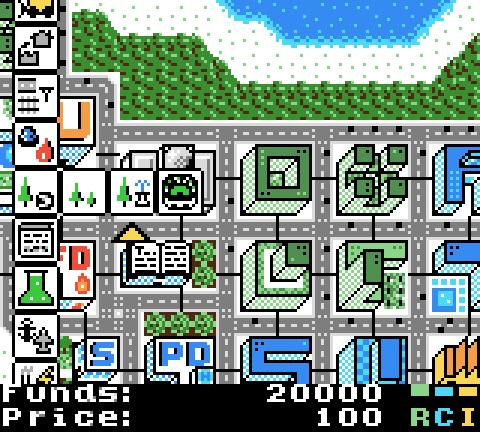 I feel like there should be some way to search the FFTs of the audio for things that match the spectrum of a square or triangle wave, to reject all the useless commentary, but I have no idea how to implement the search portion...

do they say in the video it has 2x 32K ram? or where did you get that from? I don't have audio at work.
Top

FrankWDoom wrote:do they say in the video it has 2x 32K ram? or where did you get that from? I don't have audio at work.

MMC5 is presumed from the 8x8 attributes.

So I think lidnariq is either presuming this maximum 64k of WRAM (2x32k), or presuming 32k WRAM and 32k CHR-RAM (could do pattern RAM banking). I'm not sure which.


SNES SimCity had 256k RAM inside it, for comparison, which could save two cities, so that might put an assumption for 64k WRAM being necessary into perspective.
Edit: never mind, it was 256 kilobit, so 32k.
Last edited by rainwarrior on Fri Sep 01, 2017 4:45 pm, edited 1 time in total.
Top

rainwarrior wrote:So I think lidnariq is either presuming this maximum 64k of WRAM (2x32k), or presuming 32k WRAM and 32k CHR-RAM (could do pattern RAM banking).

The pictures of the PCB (in the cut up gold shelled prototype) show a NES-ETROM board with two RAMs, both socketed. Since ETROM comes by default with 2x8K RAM, the only reason to socket them would be if they needed at least one larger RAM.

The original DOS SimCity saves its cities in a consistently and exactly 27248 bytes, ending with the map itself stored as a 100x120 array of uint16s. Obviously they could have shrunk the world for the NES release, but ...

I guess it they could possibly have landed on "just" needing 40K... but without having actually looked at the Micropolis source code, I suspect they might double-buffer the world state. And the picture shows an extremely similar SRAM in both sockets. so with the mmc5 using 2 ram chips, could you simulate that setup with one ram chip? using the ram 0/1 enable lines to toggle the high address line? or do they have to be 2 physical chips for some reason?

edit: maybe there isn't a suitable single ram chip that big? what would be the part # for that?
Top
Post Reply
75 posts