Hi everyone! Excuse me if i chosen wrong part of this forum for my topic. I tried to do my best )

Here is the deal: i need to replace girls with simple numbers in NES ROM named Ivan "Ironman" Stewart's Super Off Road
Here is the screens wich i need to edit: 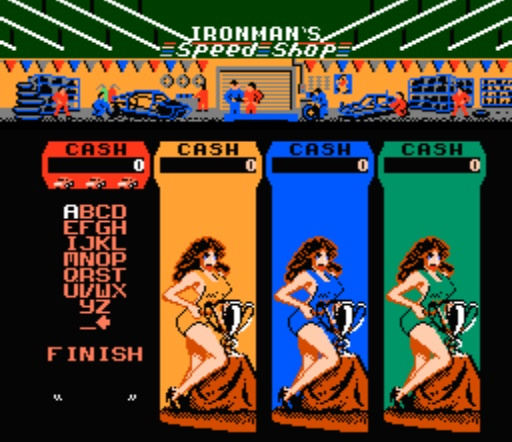 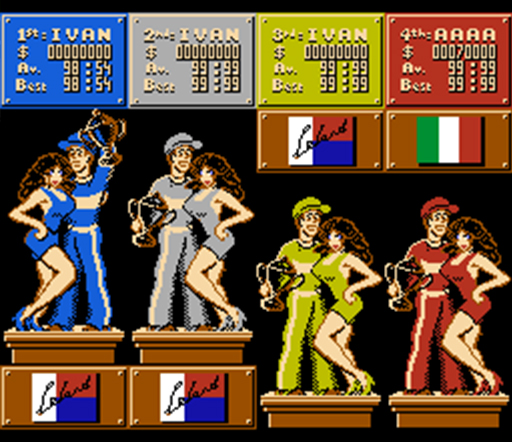 Here is an idea of the way i want to replace it with: 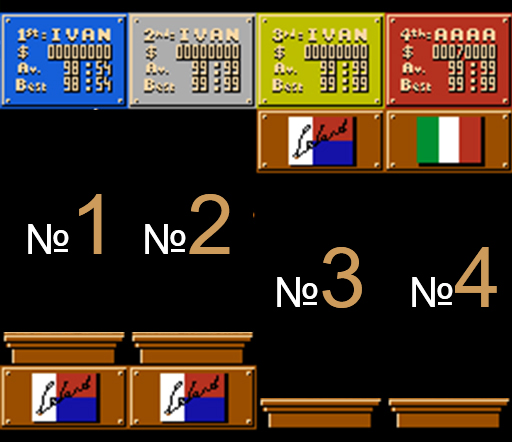 I want to make this game a bit more censored. Don't ask me why. This task may look strange - but this is definitely what i need to do.

The first problem is that graphics in this ROm is compressed.

p.s.: i understand that it can take time to do this - so i am absolutely ready to pay for this job!

A lot of thanks for your patience and attention!
Top

A graphics edit is not enough: as you see, 2-4 use the same graphics, just palette swapped. So it needs some code edits too. Perhaps it'd be better to ask at romhacking.net than here.
Top

Oh my! It works! Thanks a lot!

Ok, here is the next part - how to find all of the tiles i need? Using an emulator i can find tiles like in the picture. But i don't understand how to fund all these parts of the tileset in YY-CHR?

Is there any way to findem easier the searching all of the tile by tile (( It looks imposible as look at this: You'll just have to learn programming (6502 assembly and NES hardware required; a PC-based language like Python is recommended) to do this properly. Just to give an idea of the work involved, these are the next steps:

1. Writing a tool to export your NES tiles into the format used by the game and inserting it into the rom. This will be the easiest step in the whole thing.

2. The game's routine to output the tiles from rom to chr-ram checks for certain addresses supplied by the tile data to terminate the routine, so you'll have to modify that when deleting the woman graphics and inserting your own. Ideally, your replacement graphics will take up the same or less space than the deleted material, otherwise you'll have another problem.

3. Figuring out how the game arranges the tiles into a coherent image on the tilemap (nametable) and documenting that routine. Then changing whatever is needed to display those tiles - this might be the hardest part. It might be as simple as changing the bytes used by the woman images so the existing routine knows where to put your graphics. But there's a chance you might have to alter the asm instructions. Either way, you'll have to know asm just to figure out what to do.

Here's an example of the kind of tools you'll be writing in a language like Python (any language where you can read and manipulate files with a few lines of code will do).

And this is an example of the asm you'll read to figure out the game. A good place to start would be figuring out where $B879 is written to $30/$31. Then you can delete the woman graphics completely and supply a new address so the other tiles remain in their place in chr-ram. This must be done so the rom still has the same amount of bytes and whatever bytes you move around must not be asm instructions because that will likely break the program.

I don't know if anyone will do this whole thing for pay but these days who knows.

P.S. You'll also need a hex editor like XVI32 to verify the location in the rom file corresponding to what you see in the debugger. YY-CHR might be useful for finding empty rom space if needed, but not so much for editing the rom itself.
Last edited by strat on Sun May 31, 2020 10:41 pm, edited 1 time in total.
Top

I will very appreciate any help from every person who could scramble two screens i showed at the beigining of this topic and send me in any format for your choise (ips for ex.) via PM!

Everthing i need from you is to screw up girls in this game (theese are only two screens with em) and send me it with screwed graphics.

The first screen with girls is the one you see at the begining of the game.
And the second one you will see after each race (this is a racing game as you remember

Sorry for that. I edited my messege. There is no any piracy requests now.
Top

Thanks for updating the request. With that out of the way. we can get to the hackin'.
Pin Eight | Twitter | GitHub | Patreon
Top

For those following this topic, you might be interested to know just overwriting tiles is a bigger pain than it should be. The RLE-compressed data stream has to be the same length no matter what and the loop that reads it must terminate with the same chr-ram bytes getting filled in. Otherwise the graphics you don't want to edit are thrown out of whack. Because the programmer decided to do this:

Funny enough, commercial NES programmers don't seem to care how difficult their work is to tamper with 30 years later. It's impossible to make major edits to the graphics of this game without rewriting the asm code.
Top
Post Reply
10 posts • Page 1 of 1