I got this cart from a friend for checking. It interested me for two reasons.
* First - it is based on the rare pirate MMC3 chip called "88", which has two GND pins and it made me curious if one of them is some kind of mysterious input that, for example, allows to switch it between different modes.
* Second - because this friend said that the game behaves weirdly and sometimes on the first level it warps the player to the final boss scene. 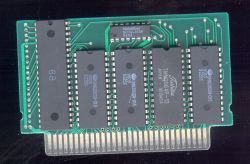 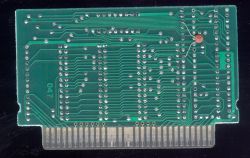 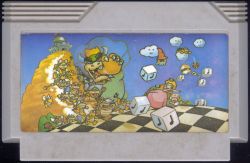 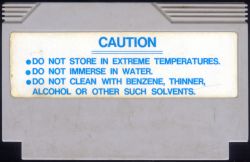 Here are the results:

1) The answer for first question is unfortunately "no". Both of those pins are shorted internally in the chip, so no extra function.

2) I tried different tricks, was going and messing around in the first level but I was not able to warp myself to the end of game, maybe it needs some kind of special condition

3C) Modification in those bytes alters the behaviour of function called when user presses B button in the world selection map: 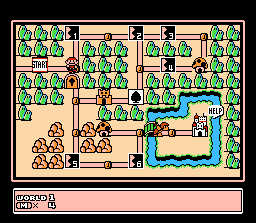 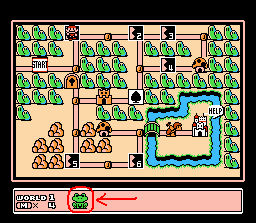 Sorry, I haven't played SMB3 so no idea what those object can be used for but as I see, there is even a "warp" object that teleports you to warp mode world. 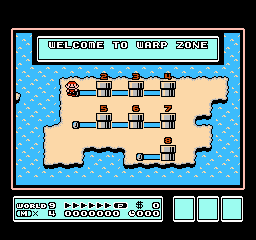 3B) Modification of this byte (which is data) is responsible for altering the behaviour of splash screen animation. In normmal rom, when the curtine goes up, the background is black for a few seconds and then the scenery appears. Here, the background stays black until you press start (but the characters are still walking and jumping, just in different way).

3 A) I wasn't able to figure yet if this byte is data or code and when it is executed or read.

Interesting! Those items are used mostly in-game, they're various powerups. You activate them on the overworld map before starting a level, and then they are applied when you start the level. A few alter things on the map instead, and some let you skip levels (like the whistle). You normally obtain them by visiting the mushroom house levels, or from other events.

Looks like it's basically a hard-coded Game Genie cheat code.
Check out my website for NES, SNES, and Genesis tutorials here. And visit my store for some custom tools and boards for making games here.

Yeah I don't think it's possible to get the frog suit in the very first world in the original game, nor do you have any need of it since there are no water levels yet (and it's not very useful on land).
In the original game there are also only 3 flutes total (and they are well hidden) and you would need all three of them to be able to warp to the last world as soon as possible. That means you must at least complete most of world 2 to find the final flute before using any of them.

What are you waiting for? This game was generally considered the best game ever when it was released.
Top

There are actually two whistles in world 1, just getting to world 2 and using them both lets you teleport to the last world.
Check out my website for NES, SNES, and Genesis tutorials here. And visit my store for some custom tools and boards for making games here.

You don't even need to get to world 2. Get the first one from 1-3, get the second one from 1-Fortress, then immediately use one to get to warp zone, and use the second one while you're inside warp zone. Instant world 8.
Last edited by LocalH on Sat Dec 05, 2020 10:08 am, edited 1 time in total.
Top

Wow I did NOT know you could use the second one in the warp zone.
Guess you learn something new every day
Check out my website for NES, SNES, and Genesis tutorials here. And visit my store for some custom tools and boards for making games here.

When you beat the game, if you start again, it fills your inventory with P-Wings. I do not think many people know this.
Top

Yeah I remember it did something like that, but I never felt like playing the game twice in a row (unlike SMB1). Especially not if you play without warping.

I had forgotten you only need two flutes though. I did use it inside the warpzone, but I was under the impression that you where only taken forward one warpzone zone per blow.
Top

If you blow the whistle in World 5, 6, or 8 and return to the same level, does it start you back over from the beginning and lose all of your completed levels? I don't remember trying that before. And from world 6 you can go backwards to 5? Wow, it never occurred to me.
Top

Oh I see, the warp zone is technically world 9.