At scales like this (1px = 25mm), mitten hands are unavoidable because you can't fit four distinct fingers into four pixels. But at least make a suggestion of a thumb.

I'll need some time to look over these pics and see what details to change, as well as expected width of a head side-to-side vs. front-to-back. I might have to strip her down and refine the underlying "doll base", as some pixel artists call it.
Pin Eight | Twitter | GitHub | Patreon
Top

Haha, the thought hadn't even crossed my mind, but it does look a little bulky.
I thought I'd try to fix it quickly but it still looks a little stubby.

Tokumaru's edit is superior, IMO.
Also, "Milca" sounds awfully familiar(but it is a nice touch, if was intended).
Top As for vertical flips in another character design of mine, I'll have a reply in another topic.
Pin Eight | Twitter | GitHub | Patreon
Top

I discovered that the hard way trying to add said character to Super Homebrew War. I vowed never to make a character with a letter or words on their clothes for that very reason.
My games: http://www.bitethechili.com
Top

Dee Jay cheated death in this regard: 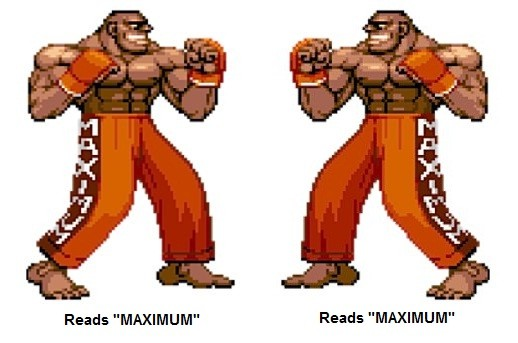