Hi! So this is my first attempt at nes specific graphics. It's supposed to be a graphic prologue that scrolls slowly at a set pattern, and use sprites to display overhead text (very limited capabilities, i know).

It is using up four palettes. All of them have a common black and a common blue. Wanted to add purple but couldn't fit it as for now with all the current choices.

Doing any real level design at this point would be counterintuitive, so this is basically a doodle that just maybe will turn out useful.
What do you think? Any comments, the good and the bad, are appreciated!

Edit: Also, i wonder, have i put too much in the upper part if i'd like to scanline distort/parallax that part?
http://www.frankengraphics.com - personal NES blog
Top

This looks pretty good! Advanced lighting is not ready on the NES. However, it doesn't look as colorful as I'd expect from a scene that uses all 4 palettes.

As for parallax effects, the only problem I see is that those 3 columns at the top could be overlapping some background elements you may want to move.
Top

I absolutely love this. There's a really cool aesthetic to the scene and I love how you used black as the dominant color. I'm slightly confused about what can be walked on but this is a really natural-looking tileset nevertheless.

Like tokumaru said, your scene is a little monochromatic for something that uses all 4 palettes. You could easily combine them into 2 and very little would be lost:

Even if you don't use the other 2 palettes for background art, they could always be used for GUI, giant background enemies or palette-shifting items like coins.
deviantART | Spriter's Resource
Top

If you wanted to do parallax scrolling on that screen, one possibility if you want to have some columns in the foreground, would be to put a portion of those upper columns on the sprite layer.
Top

This is very gorgeous ! For a so-called "first-attempt" this is incredible.

Is this scene supposed to be underwater? Because it appears to be.

For the scrolling text, you could just shift every letter one pixel down (or up) to the next, so that you can get "lines" of more than 8 characters. The major problem is that, obviously, the text will bend upwards or downwards, and in some cases this can be very weird. You're still limited to 64 letters on screen, obviously. (*)

(*) Yes, technically you could make a very clever use of 8x16 sprites and/or use multiple sprite pages and switch mid-frame but I don't think that's a good idea nor is it practical.
Top

Very atmospheric. Despite what the others have already said about the number of colors you used, I think you're pretty good at conveying a scene with as little as two of them. Excuse me while I take notes on your mountains.

If you're already doing scanline effects, you could always use another scroll split for text. You can animate it more or less however you like, as long as it spans the full width of the screen and has an opaque background.
Top

Looks frickin' awesome! Sorta reminds me, distantly, of some of the graphics in Battle of Olympus, just with way better quality. :)
Top

Yeah, I also got a Battle of Olympus vibe, for whatever reason. Looks pretty decent.
Download STREEMERZ for NES from fauxgame.com! — Some other stuff I've done: fo.aspekt.fi
Top

thefox wrote:Yeah, I also got a Battle of Olympus vibe, for whatever reason. Looks pretty decent.

Maybe due to similar colors to this part? 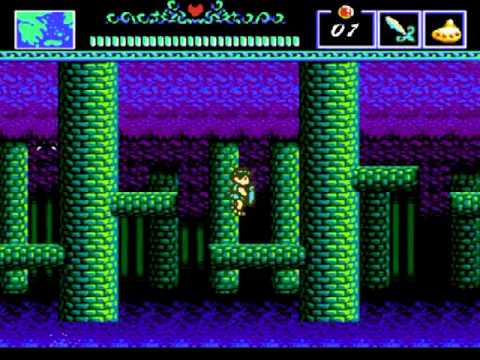 Yes, and a few other areas. But I don't see the point in going over all the visual comparisons to Battle of Olympus, as it's kinda besides the point; the point is, the graphics drawn here are quite well done, clever, and beautiful. :)
Top

Thanks, all! I'm learning much from these remarks. Here's my afterthoughts/responses:

BoO was one game i never had, and never taken the time to play through, but i just watched a playthrough and do like what the title screen/ending does, among other things. Also for an '88 game, i think it looks really fine. Besides the comparison above, the columns i included may suggest something like that too. I am surprised noone has made a comparison to dracula's curse / castle of cagliostro theme yet!

(link to comparison of the two). I wanted it to be a reference to games and film taking place in a vague concept of Europe, rather than a specific location in the same. The column capitals in my screen are a derivate of the yonic style but made assymetric to denote something otherworldly. I think the ones in BoO are supposed to be doric or maybe toscan, but it's hard to tell and who knows what efforts they made.

I never thought of it as an underwater scene, but i can totally see how it can be interpreted as such. the blue field is supposed to be a misty lake with mountains and a waterfall in the distance, while the foreground is supposed to be cliffs above. The picture is supposed to convey two cycles of decline: first the temple site was abandoned, and then the adjecting, newer hamlet.

Regarding the mountains, i have a pretty simple rule set up for my self: the more distant something is, the less detail and colour should be used.

So, here's what i've gathered so far:
-Some tiles need to be less vaguely implemented, or edited to clarify the context. More specifically, the 'rotten wood' pattern i made for doors and which i reuse in the lower left for abstract background may be interpreted as seaweed or something. The lake itself may need some further definition to not look like a band of mist.
-The hithermost cliffside to the lake needs to be more clear?
-maybe lower the 'foreground' a bit
-make it ntsc-proof
-make clear rules on what is being used to convey solid and nonsolid. Even if this screen isn't meant to be playable, its assets would be used in actual levels.
-palettes can be reduced more than i thought to convey something similar, and the freed up palettes may be used in better ways.

I managed to add purple at the cost of a few extra tiles w/o palette reduction before reading these comments. I'll update when i have something more solid to show.

The composition also seems in need of improvement. There is an awkward relation between perceived line on the bottom-left and the negative space in middle. I think it would be vastly improved by simply moving that bottom-left column over just sixteen pixels. Also, the nearer (lower) edge of the water, I think it would be improved with a more organic shape that pulls in to the blank area a bit more.

Here is a very rough example. No problem, i need to hear it!

The column capitals were originally flat, but i thought it looked less appealing, so i took that out. But i probably should have just put some more time in it. First i thought it added to the outlandish/alien feel of the place, but i totally see what you mean, and i've made a new attempt at it that i'll include in the next update.

It is also my intention to fix that cliff/lake line, which i thought looked cheap immediately after uploading.

It is currently also breaking my simple distance/detail rule, which then in effect is misleading the viewer.
http://www.frankengraphics.com - personal NES blog
Top

Possibly a little overdetailed, but here's an update. I have trouble seeing on my laptop if the colour on the water reflection is ok or horrible. But I think it will be something roughly along these lines until other requirements demand cutdowns.

I tried to follow this rule for possible level mechanics this time:
2x2 tile platforms are proper solid, 1x with 90 degree corners are jump/drop-through solids, stuff that's just a thin cliff or the like is suppes to be air/background.