by 8bitMicroGuy
This is what I've been expecting from many "no coding required" game engines. Basically, be able to set the actors' movements and collission events without too much complication having to write my own code from scratch. Game Maker promised no coding and only drag and dropping, but for a platformer, you always have to code either way. This seems to be like my dream come true! But then again, if it's GPL, I better move on.

by NovaSquirrel
Remember that the intended scope of the project is still just making simple non-scrolling games that last 4 or 8 seconds, though I really want to make sure that everything within that scope is done as well and as friendly as possible. The time limit won't be mandatory and you'll be able to try to make more complicated things if you want, but it's going to be a much better fit for a Pac-Man than a Mega Man.

There will be no restrictions placed on games made with the tool, and the game engine itself will be under a permissive license, but I don't know which one would be the most applicable. I dunno what I want to do for the compiler but I don't really have a good reason not to just go ahead and make that permissive too.

The main reason for excluding scrolling is it pretty much requires 16-bit numbers, and then you've either got a situation where the tool is more complicated and the user and the compiler both have to care about the difference in two different number sizes, or where all numbers are 16-bit and that sounds really inefficient. Maybe something where you move from room to room could work? People seem to be putting up with it for NESmaker and it was fine for Zelda. :p

by na_th_an
You can make great one-screen-at-a-time games, see Battle Kid games for a nice example

by NovaSquirrel
Does this sound too limiting? I'm trying to figure out how actor graphics should work, and a hardcoded 16x16 image per actor type probably isn't the way to go. Abusing animations as a delay for game logic like in WarioWare DIY would be out of the question and you could just use a per-actor variable as a timer for a delay instead. You could also change animations in response to pressing keys. 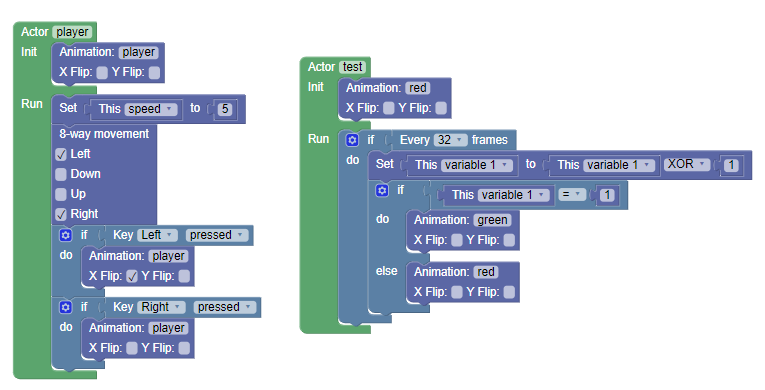 Here's an example of how changing between animations during an actor's behavior will look. I'm just gonna go ahead with this and I think it'll be fine. A very nice attribute of the whole compiler and abstraction stuff is I can change stuff without breaking old games if I ever need to. Don't know how I want to define animations but I'll figure that out or put in a temporary solution for now to get things working. 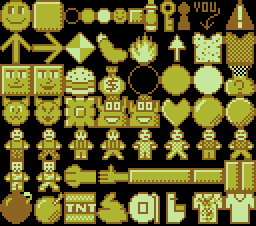 Sample assets! It's a mixture of graphics I reused from games I released, games that never saw the light of day or made any real progress, and new stuff. Probably good enough for people to play around with defining their own actors before diving in and actually drawing custom graphics for their games.

by 8bitMicroGuy
As much as I think and have observed, the two best permissive licenses are the MIT license and Apache License 2.0.

The assets look cute and very good for a start.

If this compiler and an NES emulator are bundled as an Android app, I think this would be a nice portable tool for making quick games.
All times are UTC-07:00
Page 2 of 2