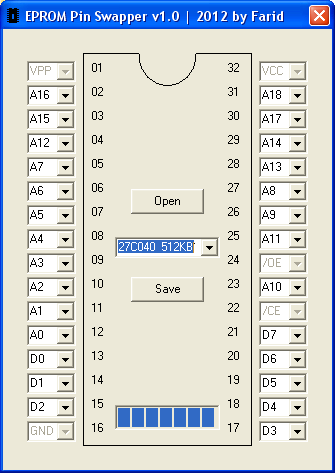 Source code is also included, it is in VB6.
There are a lot of bugs in it, use it at your own risk.
by koitsu
Given the screenshot, what exactly is it "swapping"? All I see is a pinout of an EPROM which lets you adjust what each pin is assigned to. You can't change the functions of an EPROM pin, so why are the pins changeable?

I think I may be misunderstanding because I envision the program to be something that converts the pinouts between two types of chips. For example, mask ROM <-> 27C080, or mask ROM <-> 2mbit EEPROM. You get the idea. And for that to work, you'd really need to show two chips and a chart (either wiring diagram, or "pin 1 of mask ROM --> pin 7 of EEPROM", you get the idea.

What am I missing here?
by MottZilla
I think it can swap address lines and data lines by reorganizing the ROM data.
by infiniteneslives
Very nice! I always just thought about doing this physically with the programmer pins assuming you weren't using flash. But just rearranging the ROM makes a lot more sense.
by MottZilla
With a few Nintendo pinouts address lines actually are swapped compared to standard eproms so doing this saves you rerouting a few pins. On SNES with 27c801s you can use that swapbin to only have to rewire something like 2 or 3 pins.
by nintendo2600
awesome!
by jpx72
Wow that IS awesome!!!
by Karatorian
Definitely a cool idea. Seems to work perfectly under Wine as well.
by jpx72
How hard would be to implement also exchanging Data with Adress lines? It's a chunk of data being reorganised, so there must be an algorythm to allow this change... Hmm?
by l_oliveira

jpx72 wrote:How hard would be to implement also exchanging Data with Adress lines? It's a chunk of data being reorganised, so there must be an algorythm to allow this change... Hmm?

Swapping data pins with addresses is impossible simply because data pins are outputs and address pins are inputs.

by Punch
How does this work anyway? Awesome piece of software, didn't knew that was possible

Punch wrote:How does this work anyway? Awesome piece of software, didn't knew that was possible

It just reorganizes the rom image file so you can swap out how the pins on the eprom (for purposes such as simplify board layout) are connected to the host system, while keeping the final result (data being read) same as if the eprom was connected in the normal way.

As it was mentioned on the thread, the only reason to do this is save time/effort on board layout.

by blargg
Imagine you take an EEPROM in circuit and swap the D0 and D1 connections. The NES will get the wrong bits. Now, in the file on the PC, swap these bits, then rewrite the EEPROM. Now the NES gets the right data. 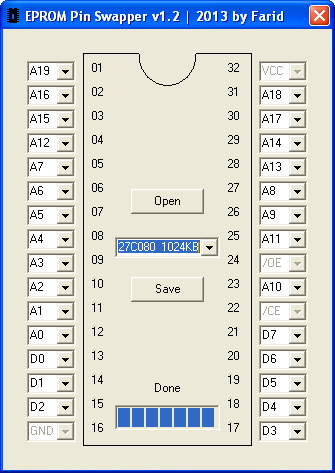 Still it is very buggy so use it at your own risk.

by wyndcrosser
Just to confirm. This would like me change the what the pins do, instead of having to re-wire correct?
All times are UTC-07:00
Page 1 of 2