Discussion of development of software for any "obsolete" computer or video game system.
Post Reply
5 posts • Page 1 of 1

Over the last 10 years, I have been building homebrew tools that allow game making on the Nintendo DS. I have a sprite / tiles editor, a multi-sprites animation tool, a two-layers level editor, a game engine and a upload/download/test/launch editor tool dubbed 'runME'. all open-source in C++. 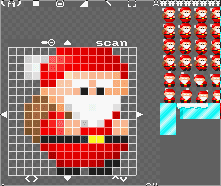 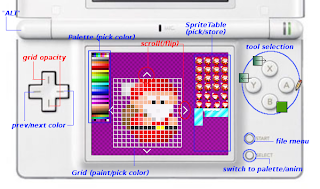 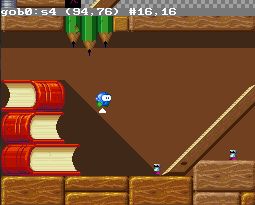 I've got a couple of demonstration game done (well, one done and one almost done)

But what (imho) is interesting is that changing the games rule, down to any object behaviour, doesn't require tweaking C++ code. Levels and monsters behaviours are defined through simpler script chaining small control rules to define behaviour in one "state" and then giving conditions to switch states. Earlier this year, I started a github fork of the engine focusing on tutorials.

- may the source be with you.
Top

The screenshots are looking nice.
For anybody not finding the download link on the Apple Assault blog:
The big green v1.4 download button (in the middle of the blog) links to: http://sourceforge.net/projects/dsgamet ... s/download
Just right of that big green button, it does also say one could download v1.6 here: http://sylvainhb.blogspot.be/2012/10/on ... sault.html
There's still room for improving the how-to-download presentation ; )
I haven't downloaded anything as sourceforge is working only for https-enabled people, aka for post-win9x-users only : /
Top

What fraction of this would also apply to the Game Boy Advance, TurboGrafx-16, Genesis, and Super NES, other platforms with 4bpp tiles and 16-bit nametables?
Pin Eight | Twitter | GitHub | Patreon
Top

It looks as if the tile and map editors are running on the handheld console itself. Not sure if the game logic is also programmed on the console?
Porting the finished game to video consoles might work.
Porting the handheld devkit to video consoles might work too - but then you'd no longer have the unique handheld-devkit aspect (and you would probably want to port it only to consoles with touch screen or mouse).
Programming language used is... Forth? Maybe best wait for ports to Jupiter Ace then.
Top

It looks as if the tile and map editors are running on the handheld console itself. Not sure if the game logic is also programmed on the console?

The editors are indeed meant to run on the NDS console. The idea is to have a game development kit in your pocket so you can tweak a monster over a bus trip, etc.

The game logic itself still has to be edited on a PC, but you can beam up a script file on the NDS via WiFi and test it there without having to recompile a .nds. Being able to edit characters behaviour on the DS itself is my next project in the tools series. Since we're mostly describing state machines, it should work quite nicely with a mixed graphical/text interface.

What fraction of this would also apply to the Game Boy Advance, TurboGrafx-16, Genesis, and Super NES, other platforms with 4bpp tiles and 16-bit nametables?

As for editing e.g. tiles for SNES or GBA, it would likely be helpful to have the interface revised so that e.g. it doesn't let you use too many colors per tile and show the different palettes on the main screen. Likely, it would also be handy if the binary file format suits a 4-bitplane structure already. It isn't available right now, but it could certainly be done, esp. if there are people around willing to beta-test such a modified version (and suggesting a binary layout, etc).

I see one drawback with the current level editor for non-NDS platforms: we can use only one palette for the top plane, as the palette bits are currently used to encode collision information. (something that should be replaced over next year).