After completing my Lupin reproduction, I've started attempting to make myself a reproduction of the Simcity prototype. I purchased a Japanese Famicom copy of L'Empereur to use as my donor. This one uses an HVC-ETROM-02. There are quite a few differences between the prototype board and my donor board. The 2 obvious differences are:
The more subtle differences are that the MMC5 is used in slightly different ways from my cart, so additional wiring may be necessary -- and there are a hell of a lot more SL/CL configuration pads on the prototype board. The CHR ROMs are identical sizes, but the PRG ROM is a 256KiB in L'Empereur vs. the 128KiB PRG in SimCity.

I may have bitten off more than I can chew on this one, though I'm not discouraged yet.

Here's what I've done so far. I have desoldered the original mask ROMs for PRG and CHR. I have burned new ones and installed them making pin reassignments where necessary. However, at the moment, I believe the MMC5 connection differences are preventing any identifiable behavior from happening. I seem to be getting intermittent behavior from the PPU. Sometimes, when I turn on the Famicom, I'll get a dark green screen, sometimes a lighter green screen, sometimes a gray screen. Occasionally, there will be a cyclical hum sound present.

Upon closer inspection, I'm seeing that the ETEPROM board has CIRAM A10 disconnected, whereas it is connected on the ETROM. When I say it appears disconnected on the prototype board, the photo isn't showing a pin running away from the chip -- if there is a trace going under the MMC5, I wouldn't know.

That was probably too much information to start with, but I'm going to go back and check for continuity between what I see as "disconnected" MMC5 pins, and the places they would be going (to make sure there aren't traces running under my MMC5). I've basically just done an eyeball inspection of the prototype pics and my PCB up until this point.

I'm open to suggestions for a good place to start to try to get this cart booting to something other than a blank screen or a hum. Does it seem like the PRG isn't being accessed correctly to anyone else? I was hoping that even if the CHR ROM wasn't being accessed correctly, that I'd be able to turn it on and hear the game audio. It has no attract mode, just music that plays, which should make it easy to test if that part is working correctly.
Top

Have you tried flashing L'Empereur to your PRG and CHR flash chips to make sure your board is correctly modded to ETEPROM?
Pin Eight | Twitter | GitHub | Patreon
Top

I'm pretty certain that, as long as you don't see rework, an ETEPROM board should be treated identically to an ETROM board.
Top

tepples wrote:Have you tried flashing L'Empereur to your PRG and CHR flash chips to make sure your board is correctly modded to ETEPROM?

I don't have a 256KiB EPROM at the moment for that experiment -- I could desolder my chips, though, and retest the original mask ROMs. I contemplated putting sockets in on the first go around, but since I was shooting for keeping it neatly inside the cart housing, I skipped that part. Kicking myself now.

I probably will desolder the chips, install sockets and retry with the original mask ROMs just to be sure that I haven't screwed something up in the process.


lidnariq wrote:I'm pretty certain that, as long as you don't see rework, an ETEPROM board should be treated identically to an ETROM board.

That's a relief. This cart had never been repaired, although I suspect that the battery might have been replaced, as I saw just a tiny amount of flux still on the board around the battery tabs. Battery had a date of April 1991.

Okay, so let's pretend for a moment that the tests go well with the original mask ROMs. What should I tie the MMC5's PRG A17, PRG A18, and PRG A19 (pins 64, 65, and 66 respectively) lines to? Since Simcity is only a 128KiB game, I don't need those three -- should I let them float or GND them? Wasn't sure since they are controlled by the MMC5.

Also, why does the ETEPROM board have 9 additional SL/CL configuration pads?
Top

Do not let inputs float unless the datasheet specifically says so (with something like "open collector" or "open drain"). Usually you want to ground unused address inputs, or just double up the ROM and connect them normally.
Pin Eight | Twitter | GitHub | Patreon
Top

tepples wrote:Do not let inputs float unless the datasheet specifically says so (with something like "open collector" or "open drain"). Usually you want to ground unused address inputs, or just double up the ROM and connect them normally.

Okay, but I'm referring to the pins on the MMC5 that are supposed to go to those lines. Not the EPROMs, all of its pins are accounted for.
Top

Unneeded outputs should only have one thing driving them: the MMC5.
Top 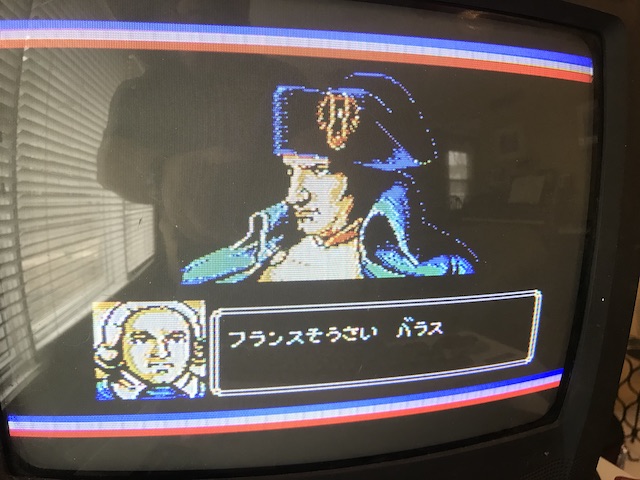 Okay, so some good news. PCB and MMC5 seem to be undamaged and working with the original mask ROMs installed in sockets. I realize we were trying to troubleshoot EPROM connections, but this is more of a sanity check for me, so I appreciate the suggestion (to retry the original ROMs).


Okay, so now I can start trying to wire up the EPROMs again. I was referring to the wiki on the Mask ROM pinout page. Are those still accurate for the ETROM PCB? I mapped the PRG ROM pinouts on the ETROM board as such (seemed to be a match): 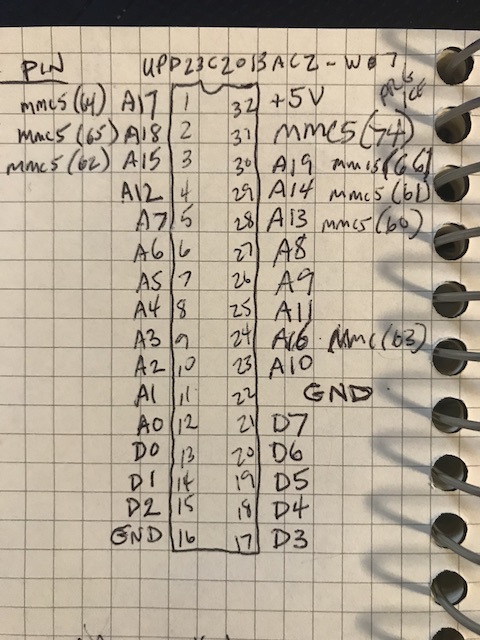 On the wiki page, I was following the MMC5 column for the PRG ROM, and the CHR column for the CHR ROM. Although, admittedly, I sometimes confuse myself looking at the diagrams and keeping the socket/chip pins differentiated, but I did double check everything before. But at least now I know the MMC5 isn't toast.
Top

lupin3rd wrote:I'm referring to the pins on the MMC5 that are supposed to go to those lines.

Okay, so I've reinstalled the EPROMs again, and this time I made jumper wires using machine pin socket ends on them, so I can remove them easily. I'm still getting the same weird behavior, inconsistent video output, occasionally a cyclic hum. These EPROMs did verify properly after burning, so I'm 99.9% sure they are fine. What I'm not really sure about is whether or not I have everything connected to them properly.

Check out how I have things hooked up, and hopefully tell me that I'm doing something wrong or forgot to hook something important up.

Here's what I have: 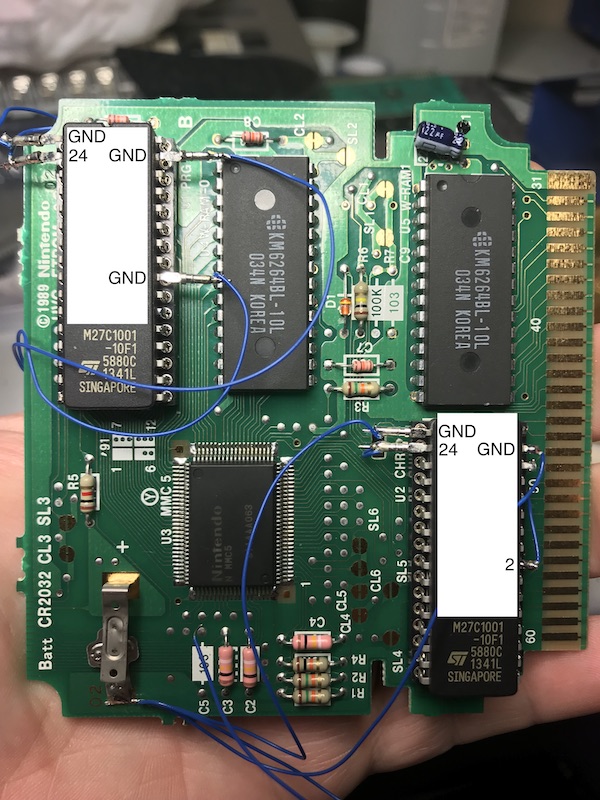 I think what you did with CHR pin 2 is incorrect, but that's not enough to explain the problems.

Okay, despite my automatic verifications that run at the end of every chip burn, I just popped my PRG ROM back into the burner and it does not verify... So I'm blanking that chip, and will try a reburn, and if that doesn't work, I have another M27C1001 onhand to burn also.

Fingers crossed, something wonky happened during the burn and I can get this thing to run.
Top

Feels like time for another sanity check. Seems like I'm struggling with understanding the wiki about the mask ROM pinouts. I mean, I thought I understood it, but things aren't working -- so can anyone do a sanity check for me? Can you quote a response and fill in these gaps of where the pins go for an HVC-ETROM-02 PCB with the M27C1001 chips in place for both PRG and CHR locations?

In both cases, Pin 30 of the EPROM is NC internally, so I left the pin plugged into that pin on the socket. If I put parentheses on the line, that's what I had the pin connected to most recently. 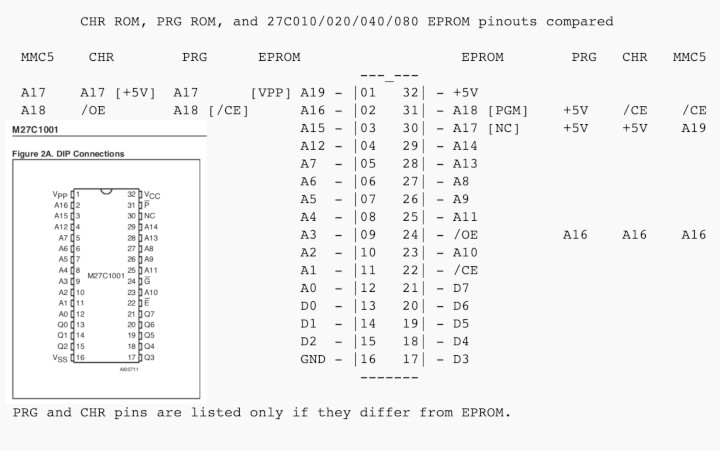 Okay, I got PRG working! Looked back at my manually diagrammed pinout for the PRG socket on this board, and noticed that pin 31 on the socket was a /CE line coming from MMC5. So I took EPROM pin 22 out of the socket, and ran it straight to that line, and voila! Working PRG. CHR looks a little corrupted though, so something is still off... 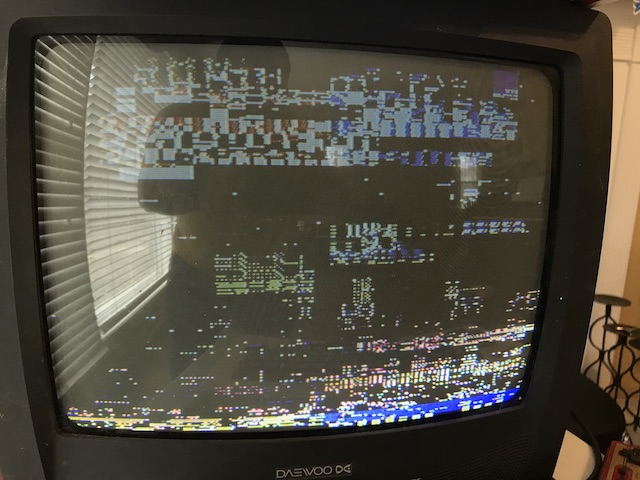