by jpx72
Since I found the dumped "Rockman 6-in-1" multicart I was thinking about recreating the cartridge on existing donor MMC3 board. But I lack the knowledge to figure out the additional hardware needed for it so I want to ask for your help. It shouldn't be very hard, as MottZilla, who helped me to make my own dump of that cartridge, already found out everything about the software. Here are his quotes from the TapeDump topic:

MottZilla wrote:Some bits are speculated until more testing can be done. PRG is probably concrete but CHR is a bit fuzzy. I think the upper nibble of $5010 and $5012 are related to CHR configuration.

The upper nibble on $5012 is probably CHR-ROM address lines.

Again I haven't confirmed some of this but I'm pretty sure that most of it should be correct.

Update:
Retrieved the Menu CHR and confirmed the data ordering.

$5011 really controls upper address lines on the PRG-ROM. $5010 controls address lines too, by deciding which ones the MMC3 can control and which ones it holds in a constant state to effectively set bounds for the ROM data seen by the MMC3.

That should cover most of the mapper and how it works.

Stuff about hardware. I'm not sure this is all exact as I'm no hardware expert.

PRG-ROM Connections
A16 and Below Connect Normally to MMC3

MBR being Master Bank Register. It controls the upper PRG lines. The upper most 2 are always connected to the MBR. A18 is used in 256K and 128K PRG modes by the MBR. In 512K mode the MMC3 needs this as the ROM is 512K and needs that to switch between the first and last 256K of data. A17 connects normally to MMC3 unless the mode is 128K in which case its I think held high (+5v) so the lower 128K of the selected 256K block is all that is visible. This is used for Rockman 1.

I think all this is correct. CHR-ROM has a similar setup. I imagine you could built your own cartridge with a TxROM cart and additional hardware for the MBR.

The cartridge needs 2048kB for PRG and 512kB for CHR. CHR won't be hard to add, since 27C401 will be okay for that, but PRG is harder, and since my EPROM programmer is not capable of burning EPROMs with more than 32 pins, it would be best if the PRG ROM gets splitted in even+odd parts to two 27C801 EPROMs.
I'm really looking for some easy (can be hand-drawn) schematics of this.

Lastly, for the link to the rom dump on that chinese website, click first result of this search or contact me via PM, as I don't want to post that link here. The chinese dump was emulated by CaH4e3's mapper-modified version of FCEU. My dump was emulated by MottZilla's personal unreleased emulator. The cartridges used by me and those chinese guys are the same.

And some of my findings:

Hex values in the chinese dump:

by kyuusaku
Shouldn't be hard is relative, what's easy to emulate isn't necessarily easy to put into hardware. Since you need help I wouldn't make such assumptions

It looks like nearly 10 chips unless you use programmable logic, and it will require adding in a CHR RAM. Reworking all that into a donor board, easy? I think not. I also don't think it's very economical compared to just buying another multicart or even designing another one that's more hardware efficient.
by jpx72
I'm not against using programmable logic, as far as it's relatively easy to get the programming inside (I have a selfbuilt 74188 and 74287 programmer, if that helps, if not, here is what my Eprom programmer looks like, maybe it can be used to programm something different). CHR RAM is also not a problem, I have spare 8kB and 32kB SRAMs.
This is not a question of money, but the original pirate multicart itself is pretty rare (and fragile, since it's a glob-top).
by FARID
hmm...
This should be interesting!

I think you will need at least these chips :

And some other TTL chips.

Is there any picture of the glop top board?

How to find the chinese site
by jpx72
Farid, have you even read my first post? I knew all that and "some other TTL" is the main problem here. And no, I can't use 27C160.
by MottZilla
If you reread, he says either two 27C801 (8 meg) eproms or one 16 meg 27c160. Either works except that you will need another chip or atleast part of one to control chip select between the two I think.

Farid has built a MMC3 multi cart from a pirate cloned MMC3 chip before as I recall. So he should have a good idea of how you could reconstruct this mapper.

Farid, what jpx wants to know is how to wire up the TTL chips and eproms and sram and a MMC3 mapper so he can recreate it. I don't think he knows much about the functionality of the logic chips, which is what he is asking for help with. Not necessarily understanding the logic but getting a wiring diagram so he can build it.

jpx72 wrote:The cartridge needs 2048kB for PRG and 512kB for CHR. CHR won't be hard to add, since 27C401 will be okay for that, but PRG is harder, and since my EPROM programmer is not capable of burning EPROMs with more than 32 pins, it would be best if the PRG ROM gets splitted in even+odd parts to two 27C801 EPROMs.

You can see I knew all that, and no, I cannot use 16-bit EPROM because it has 42pins and my programmer doesn't support that, as I mentioned.
You don't need control chip to use two 27C801, you can even use the "sandwich" ("piggyback") method to easily connect them together (to build yourself a 27c160 from them). Trust me, I learned my part of that with 16-bit consoles, where I had to use 8-bit chips instead of 16-bit, because of the limitations of my programmer (check my NeoGeo MVS bios replacement here)

Sorry, I don't want to struggle anymore, thanks MottZilla for trying to help. I know enough to build almost anything if the proper schematics is available, I have my experience with building cartridges from scratch for Sega Mega Drive, Master System, Atari and even Watara Supervision. And I know enough about NES/FC cartridges too.

I would be really thankful if somebody can figure out the TTL logic and draw some simple schematics for connecting it all together.
by FARID
I am not an expert and don't know much about software aspect and last time I had a hard time to understand about registers and how they really function!

I just make cartridge by reverse engineering the hardware of my own pirate cartridge and then mix it with my imagination, and I love doing it!

Here is my imagination about this cartridge :

Edit : Sorry this diagram is wrong!

For second time : I need to see the picture of the cartridge which is glop top to make a better imagination

FARID wrote:For second time : I need to see the picture of the cartridge which is glop top to make a better imagination

You already found that:

Just click on the first Google result of the search you provided.

PS: The search won't point you to the actual romdump, I was searching for it with the help of google translator on some chinese sites and it took me quite some time. If you need the link to the romdump itself, go to the first result of this search.
by FARID
Wow, this is amazing!

Maybe I try to make it :

Can you find for me a better quality picture of both sides? You can make the schematic from this board.

I just realised that the chinese page has my photos posted...
by FARID
To make the schematic you need these : 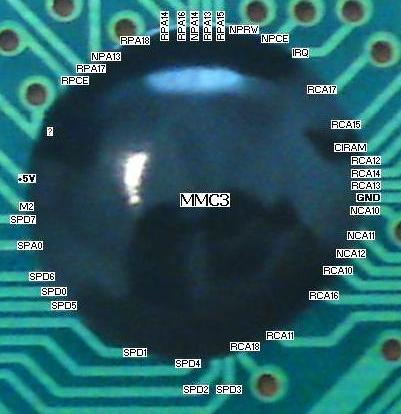 I'm tired...
by FARID
Ok very good. From now on you have to rely on some other info. You need to find out about special lines. You can also ignore identifying exactly some of lines. For example it is not necessary to find out which line is really CHR A17 because we know that lines from CHR A10~A18 connect directly to AX5202P so you can mark those 9 lines which directly come from CHR and go to AX5202P, in generally A10~A18.

You messed up a little with left side of PRG.

By the way who dumped this cartridge?! And how?!
by MottZilla
He dumped it with modified TapeDump programs I provided. Then I assembled the dumped data into an iNES ROM file.

The mapper chip/glop top is a MMC3 clone with multi-cart functions.
All times are UTC-07:00
Page 1 of 16