Any word yet? I would be thrilled to purchase one.

Not all is (bubblegum) rosy. Does this reviewer have a point or is it just a difference in taste?
Pin Eight | Twitter | GitHub | Patreon
Top

tepples wrote:Not all is (bubblegum) rosy. Does this reviewer have a point or is it just a difference in taste?

Probably just difference of opinion. I happen to like Streemerz, Munchie Attacks, and I Wanna Flip The Sky, but I don't like Driar quite as much.
[url=gopher://zzo38computer.org/].[/url]
Top

I find Streemerz to be the most impressive game, Tepple's Missile Command clone (I forget the name) is cool, and all of Shiru's games to be stellar. Everything else ranges from 'okay' to 'bad', understandable since these games were obviously not made by a team of 12 Japanese programmers. I find it ironic that the better games were made by European programmers, when the NES' presence wasn't that great in Europe. Shiru makes sense, since he likely played the Dendy back in the day.
Top

I apologize for my lack of presence on the forum the past ~8 months.. Lots of changes in my life over the past year, but the dust is pretty well settled now. First item of business I owe everyone is a financial update from the A53_vol1 "Streemerz Bundle".

Here's my last update a few pages back. Most of my projections from that post were accurate as well, so here's where we're at:

I'll be replying to specifics for the volume 2 release in it's thread. But I'd like to address our long term plans for volume1. I still get frequent requests to re-list volume 1 for sale, but the way we structured things we as a community have only permitted the publishing of the 150 carts thus far. As discussed perhaps someday we will be able to include the previous volumes within the latest volume in one true action"53", but until then volumes are separate. So the question is do we want to have a long term release of volume 1? When setting things up for the 2014 compo we addressed this issue to cover the long term release, but we haven't revisited vol1 to address the long term plan.

I figure if we're going to do it, doing so in conjunction with volume 2 release is probably the best timing. From a production standpoint the carts from volume1 and volume2 would have identical hardware so flashing the proper volume and affixing the proper label is fairly simple. Additionally, the conjoined release would help overall sales as people buying vol2 are likely to pick up vol1 if they don't already own it.

I've talked with thefox about the idea in private as to his thoughts on this based on his game being the most significant player. I don't want to speak for him, I'm hoping he'll chime in for himself, but as I understand there is a decent chance that a long term release of volume1 would exclude Streemerz. So please consider that in your vote for a long term release of vol1. By all rights, we should have permission from all contributors on a long term release. There is also some work that will have to go into a long term release which didn't include the LE/RE titles by removing them from the rom and reworking the label.

I can make a write up on the costs involved, but in reality it'll end up being the same cost per cart as the vol2 release (which will also compare similarly to the RE release of vol1). So from a financial standpoint vol1 sales would appear like more vol2 sales. If I were to guess we'd probably sell ~50 vol1 carts over the next year, but we'll probably sell 200 vol2 carts..?
If you're gonna play the Game Boy, you gotta learn to play it right. -Kenny Rogers
Top

It appeared on James and Mike Mondays (with the guy from AVGN). Discussion is consolidated in this topic.
Pin Eight | Twitter | GitHub | Patreon
Top

I should probably make some thread just for my homebrew illustrations, but in the meantime… 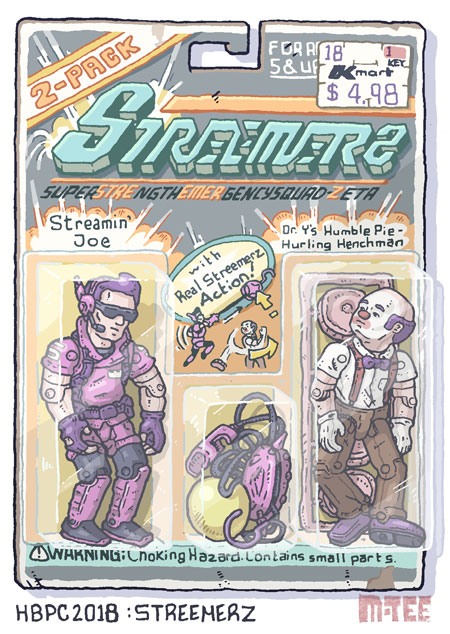 ...drawn for the Homebrew Players' Competition over on NintendoAge.
www.mteegfx.com
Top

Already told you this, but: very cool!