This looks great! I can't wait to see it colored as well.
Top I love how chaotic it is!
Top

Glad y'all dig it. I only get short bursts to work until the weekends, but I'll keep posting progress as it comes along. 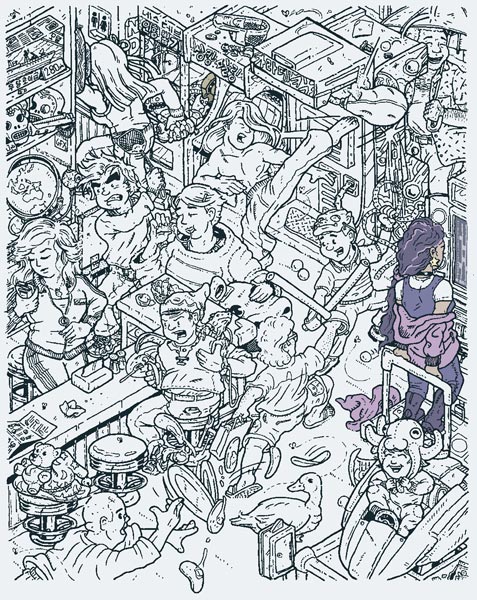 Man, I'm so glad you are in charge of the cover art. It looks gorgeous.
http://www.mojontwins.com
Top 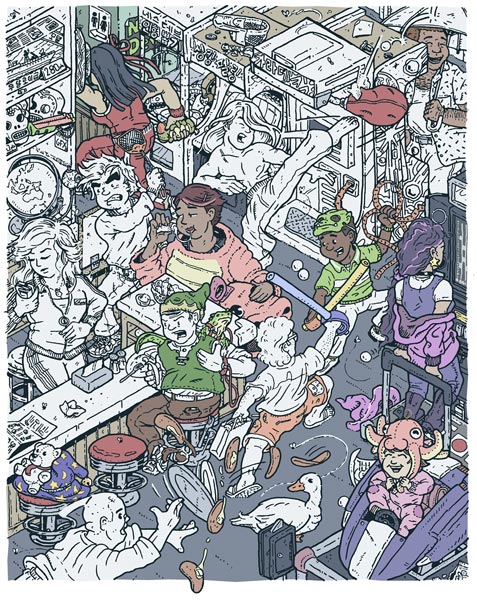 Thanks, man. I really enjoyed interpreting your characters into the modern arcade / realistic setting chosen for the illustration.

Lala, for example, shows references to her cutscene sprite through a dark sleeveless top, tall dark boots and long, purple, curly hair -- and her in-game cutscene with the magenta drawstring hoodie (for her robe) and witch's hat (on the floor). The star earring is a reference to her magic wand, and the rest (baby tee, hand-stitched black jeans, scruncie, choker, and highlights) were all added to strengthen the mall-teen aesthetic for the type of girl that'd wear a witch's hat in public.

In fact, I recognized her in the B/W preview picture because of the ear rings, nice touch! Congrats

Thanks, man. Not being able to draw some detailed twin dragons was my biggest sacrifice in choosing the arcade setting. A Barney-esque arcade mascot was the next best thing... 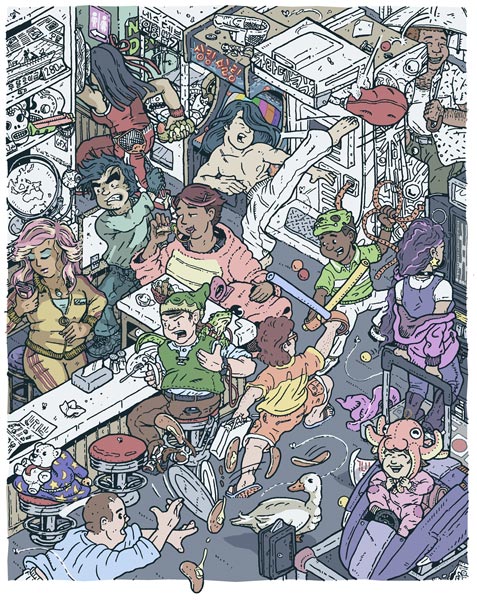 Anyway, hope ya'll don't mind the daily updates. Haven't finished flats, but have started some shading (Cheril and a bit elsewhere) to get a feel for the final light / dark balance.
www.mteegfx.com
Top

Nothing to add but superlatives!

Oh, and keep the daily updates, I am thrilling for it

This is wonderful! I love how waddles is just there like "how did I get here? What's going on?"

...it's kinda an accurate metaphor for the game/development too

I had trouble finding 240p Test Suite in the first version. But now after looking up the hangul on the marquees, I realized 240p Test Suite is plugged into the Sinking Feeling machine's JAMMA slot as a diagnostic.

Speaking of "Sinking Feel-Ling" (싱킹필링) on the marquee: I'm not familiar with the conventions for hangulization of English, but I do know hangul for Korean tries to be morphophonemic in that a suffix beginning with a vowel is often moved to its own cluster beginning with a syllable break (ᄋ). Is there a reason the ᆯ (L) is doubled?

There are two lines of hangul on the marquee of what appears to be a claw machine (nearest the restroom). The top line says NESdev, but English Wikipedia's article about claw machines doesn't appear to link to a Korean article about the same thing.

Another question I have relates to how this illustration is supposed to fit on the packaging and cartridge label with the title and stuff. I ask because that might affect whether there'd be a place for a "B-side" where Gus from 240p Test Suite is repairing a game after hours. Sorry for the late reply. Wanted to finish coloring the crane game to post with it: 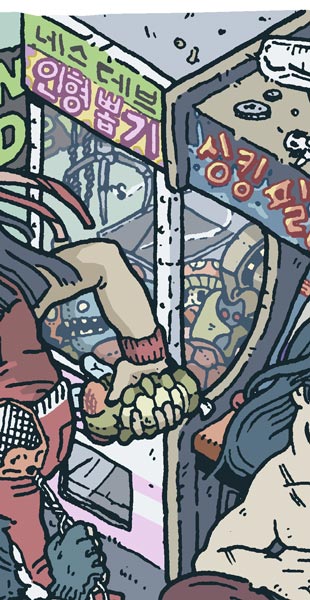 You're right: "네스데브" is NesDev
Below it is "인형뽑기", which is what claw games are most commonly referred to as (loosely translates to doll pull or doll pulling machine). Here's a blogpost with an image of a shop that uses it in their signpost for reference.

The double rieul (ㄹ) in 싱킹필링 is there because it's common practice when writing out foreign words in Korean to double that character for an "l" sound in the middle of word, when a single instance would be used for an "r". (This is not entirely consistent, but is a solid guideline. Spelling of foreign words into Korean can vary quite a bit as well.) Spelling out English titles for media instead of translating them is the most common approach, at least since the 90s. I had initially considered translating the title, but in doing so, it could mistakenly bring up connotations with a high profile ferry sinking incident from a few years back.

Anyway, glad to explain anything asked. Hope the Korean isn't an issue. I felt it'd add a little visual interest to the setting while also removing any unwanted emphasis put on titles whose marquees would be visible. Especially with the coloring, for the average consumer, the in-illustration text should merely add to the background, not stand out from it at all.

It's late now, I have the layout for box and label, including logo and title pretty concrete in sketch form. I'd rather just wait until they're done to post them, but I'm pushing back another project already to make time to finish this, so definitely no time for "B-sides" versions of the illustrations. Sorry.

I'm in love with the blueish colouring you gave to Cheril's eyelids, she's a true queen of the mall!
http://www.mojontwins.com
Top

Was out of town for a little over a week. Here's the prize shelf.

@na_th_an
Thanks. Many of the sprites had a lot of character and were really fun to interpret. Mall queen who's too bored to be at work seemed like the perfect representation of a goddess.

Early pencil work had a Calavera reference in the top right with an El Diablo from Suicide Squad-type character playing a (shotgun) light gun game... until I realized that I hadn't included a Brick Breaker reference. Luckily, I hadn't inked that portion and was able to relegate Calavera to the prize shelf.
www.mteegfx.com
Top
Post Reply
66 posts