I don't think it's cheating as the version you have to consider when voting is the one available on deadline. Further work is just enhancing the game for the cart, so cart buyers get the best product possible.

But I think we should discuss this issue elsewhere and stop polluting this thread.
http://www.mojontwins.com
Top

Ok, "Wolfling" has been submitted. (eh, will I get an acknowledgement of receipt?) 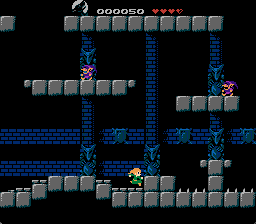 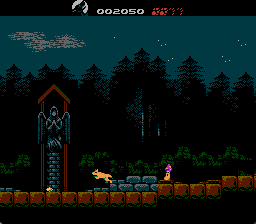 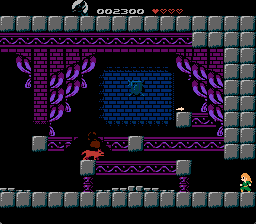 I had enough time to add new rooms, so there's only ca. 1k ROM left. That's probably not enough to add more levels, but anyway, it might be interesting to know if it's ok to add another level after the voting or if this is discouraged.

Thanks for all the support, especially to Zolionline for the graphics and Cyborgjeff for the music!

i'm just repeating myself here, but it looks good (and fun)!

We continued the discussion for a bit in the rules thread (maybe you saw it?) As far as i'm concerned, nothings' to stop you from updating it, especially after voting has concluded. I mean, it's up to you how you want to represent the game on cartridge.
http://www.frankengraphics.com - personal NES blog
Top

Brad (NESHomebrew) emailed me about 12 hours after I submitted. I suspect it will be whenever he gets a free moment.
nesdoug.com -- blog/tutorial on programming for the NES
Top

If you describe how level compression works, someone might be able to help you pack things tighter.


Lazycow wrote:but anyway, it might be interesting to know if it's ok to add another level after the voting or if this is discouraged.

So long as you don't release the improvements until voting closes, of course you could add more levels.
Pin Eight | Twitter | GitHub | Patreon
Top

Yes, it might be possible to free some bytes, but it would be a lot of work. I think it depends on the feedback: If the game isn't well received, then another level makes no sense.

Uh oh, both test players found an annoying bug after I have submitted the game.

I resubmitted the game with a fix...
Top

I don't think you have to worry about the game being poorly received... I'm pretty sure there's a ton of us who can't wait to play it.

And congratulations on submitting on time!
Top

Here're the links to Cyborgjeff's "Work in Progress" of the two main songs of Wolfling:

Small one, since you'd lose all progress here anyway.

If you die as a human in permanent moonlight (maybe any moonlight) you can no longer get back to the title screen.
https://kasumi.itch.io/indivisible
Top

i just played for the first time and it's quite impressive! nice setting, mood, music, art, and gameplay.

i like to try to give constructive critiques and obviously you can feel free to ignore, but i felt like there was one thing that was holding back the flow of the game: you appear to lose all momentum when you either finish a roll or land a jump. my instinct is to land the first jump and to immediately jump again. however, when i land the first jump and lose all velocity, then the second jump just winds me up in the pit (happened to me my first 4 games...). similarly, in wolf form, i instinctively want to use the 'momentum' from a roll to leap forward (which i think would be a LOT of fun to get a nice big leap at the tail end of a roll), but it doesn't work like that!

Anyway, I think you're right, the ability to do multiple jumps without losing the momentum could be a nice tweak to the controls. And you're not the first one telling me this, I'll think about it.
With this feature, it would be possible to add some kind of jump challenge where you can only pass when you're doing multiple jumps with full momentum. Interesting.
Top

It might not be a good idea, however, to make inertia after landing quite as slippery as some builds of Lizard. Consider preserving momentum if the player is holding forward.
Pin Eight | Twitter | GitHub | Patreon
Top

Things i really like with this game:
-Great style!
-If you ignore the the characteristics of nes graphics in general, it feels a bit like a commodore or DOS game. It's in the philosophy of the controls, the status text printout, the split HUD, little things like that. It feels refreshing!
-the ambition and fine granularity of the collisions makes a richly varied platforming experience possible.
-the "modern" camera
-level + graphical assets makes me want to explore, and that's great fun!

Critique:
-I had the about the same problem as toggle switch with the controls. It takes some time getting used to (which is fine), but the control scheme feels just a bit like a translator between me and the game (i guess all control schemes have this role, but it's less transparent here), and i need to think a bit more carefully how i phrase things to the translator in order for it to translate my intentions to the game as intended. Maybe a study case, although it's quite different in its aims and designs, would be metroid (nes). It also has two jumping modes. Perfectly controlling which one to use takes a bit of learning, but the consequences for failing isn't as harsh.

-I find it maybe a little too easy to trig the (re)transformation by mistake - but maybe better habits would settle when playing this game on repeated occasions. In any case, i would've prefered select, i think (it's usually the goto character selection button), which also would mean transformations can happen at the exact time i press the button

-There's frequently little collision bugs here and there. You probably already know about these? Nothing too serious as it is mostly cosmetic, or else just a hickup in the flow of the game. I haven't gotten stuck or anything because of it.
http://www.frankengraphics.com - personal NES blog
Top

Wolfling fails to start in Action 53 volume 4 page 1. I investigated further, and I got the solo ROM to fail as well.

Reset vector is $D300 Trace log shows that it goes off into the weeds with an RTS at $F735, returning to incompletely initialized code in zero page.

Hitting 'reset' during gameplay, in several emulators, crashes the game.

Not sure if it's relevant, but gameplay has bank #2 in the $8000-bfff slot rather than bank #0. Perhaps this is the problem. (ie. the reset code might expect bank #0 to be in place).
nesdoug.com -- blog/tutorial on programming for the NES
Top
Post Reply
153 posts