This is my first post, so I may introduce myself (I did not find a dedicated topic).
I'm a french developper (sorry for the bad english afterwards

), mostly coding on Atari Lynx as a hobby for years (but playing on many consoles), but in 2021 I want to explore new horizons, and NES is a mythic console I didn't dare tp approach before.
Thanks to drludos, I started to code on NES 3 weeks ago, and I think what I achieved right now is quite interesting (it's easier to be indulgent when you are the author

Upsad Down takes the most iconic puzzle game, and remix it with a classic from arcade, disturbing all habits and sensations if you are used to the original puzzle game. As said on Twitter, the ball can be helpfull or awfull, but never neutral. You can play with it or try to use it at your advantage, but it will allways disturb the game.

Right now, there are 2 different of games :
Single : you play on a single playfield , trying to make the highest score 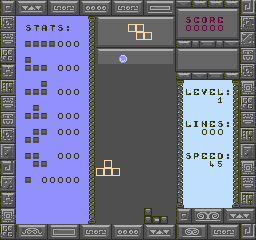 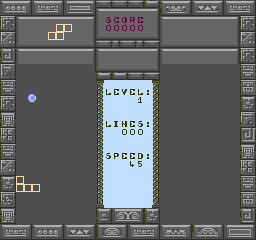 Game speed up to level 9 each time 5 lines are made in this demo. I guess gameplay is classic (Up is to store/swap piece with stocked one)
More special bricks will be implemented (right now, + and - bricks allow to speed an slow up a bit the game), like steel ball, stone bloc (create a 2x2 bloc indestructible on playfield), ...
Music is just a placeholder, I'm waiting for a new one from a friend (same for SFX which are missing right now).

I'd like to enter the contest with it, but I have some questions : v0.1 demo version : [Edit 2 : does not work on NTSC system - see in post #5 an updated version]
(Edit : tested on a real NES in PAL only, I am interested to hear how it works on NTSC NES)

Also, in a second time, I will add a Story mode (inoperative in the demo), where you have to deal with some challenges, usually help a character to escape by making lines (but with some twists on objectives). The main world of Story mode will look like a platformer (each letter will be a challenge). 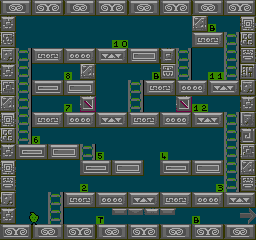 Regarding the NTSC behavior, when playing it in Mesen in NTSC mode, the playfield is invisible. I believe you are writing a palette outside of vblank (scanline 2 or 3) when rendering is enabled. Since vblank is much longer on PAL, these writes fit just fine there.

I don't have much to add about the copyright issue. Copyright around games of this sort seems pretty murky because there's not a clear enough line between decorative and functional elements, and I'm not sure there's a clear test for when a game becomes different-enough. I suspect there's a healthy-enough fear of the Tetris Company that being this similar might be an issue for the competition. I'll be curious to hear what others have to say on the topic.

The ball definitely changes it a fair amount. I'm not sure what the right way is to deal with it. The special mode seems very difficult to me and I'll need to play around with it. I like the music quite a bit. The main thing I don't like much is the controls: I find it very hard to just move one space, so I'm often struggling to get the block in the correct location.
Top

Thanks you for the feedback.
Yes, I need to finetune the controls, this is on my todo list.

About NTSC and the palette, I thought my Mesen was on NTSC mode, but I must have change it. And I can see the problem you mention.
It seems I have something to learn about palette management. I'm usign Shiru's Neslib but pal_bg does not set up palette correctly (color $2D is set et $10 for example). So I tried to set by hand the palette between 2 frames. But it does not work on NTSC

So... back to the code/test/cry routine

The $xD column of the NES palette is weird... Not all versions of the PPU have those grays, and color $0D is the infamous "blacker than black", which can cause trouble on some TVs. Generally speaking, it's better to avoid column $xD altogether.
Top

Thank you, I will save myself some time, and rework my palettes without $2D (I will have to find other tones than grayscales for stone)
Top

This newer version should work on NTSC (at least with MESEN).
I changed the palettes and used pal_bg function.
There is only 1 palette per screen, so I need to rework them to change backgrounds and font colors (and be less aggressive to the eyes).

Also, I let the very early basis of Story Mode for this build, you can move Leaf to each X symbol and press B button to enter challenge. Only the 5 first challenge are here (and not definitive), but this is a look at what the Story Mode could be (but in a second time, when single and special modes will be ready).
Last edited by Fadest on Mon Feb 22, 2021 6:22 am, edited 1 time in total.
Top

Just created a preliminary itch.io page for the game, so the new version is playable via jsnes.
https://fadest.itch.io/upsad-down

Some placeholder SFX added, Single mode has now a (quite) definitive form, with a power-up (and down) jauge.
Top

beta v0.5 with Story mode is playable online via itch.io

Story mode is intended to be a full platform game where you alternatively play 3 characters, with challenges inside.
Right now, there is only 1 screen, and 9 challenges. The difficulty ramp up is of course quite strong, and you get to play with other characters (Fire & Water) quite soon.
Top

My main question is about this point :
Entries must be original. Plagiarism and copyright infringement will result in disqualification
Does Upsad Down differs from original material enough to not be considered as a copyright infringement ? I know copyright holder of the original game are a bit (over)sensitive about it, but in my opinion, the ball is a real game changer.
What do you think, is the game eligible to the contest or should I keep it for myself, and consider working on another game (maybe for next year)

I think that is probably a question only the person putting out the cart could answer. It seems original enough from a competition to me (obviously you are not just making a clone), but putting it for sale on the cart might be another thing.

And a silly question : where do I have to submit the game ? Is this topic enough, via mail or do I have to use a submission site (itch.io, ...) ? I have not see this point in the rules (but I may have misread) ?

Something will be up soon. Brad mentioned recently on the discord that he needs to start on the submission form