Ion Maiden is the excellent retroshooter built on the Duke3D engine (port).
And after a while after its release I found some interesting easter egg in youtube stream of it: 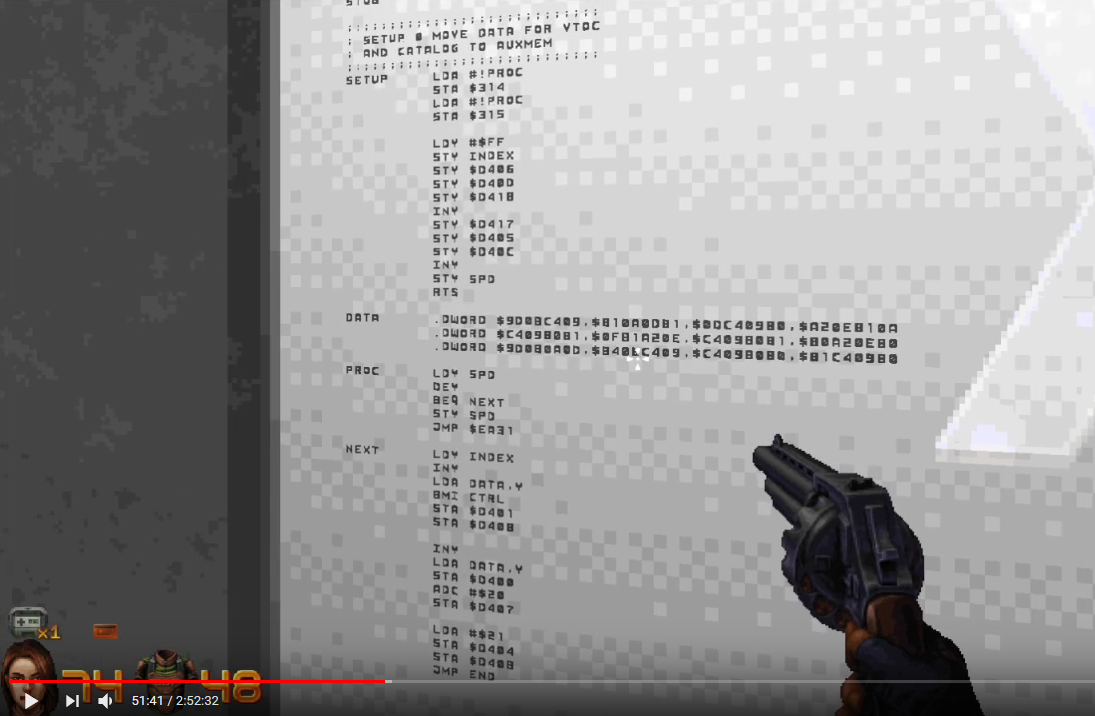 It's obvious reference to Terminator movie and vision from eyes of cyborg-killer-from-future: 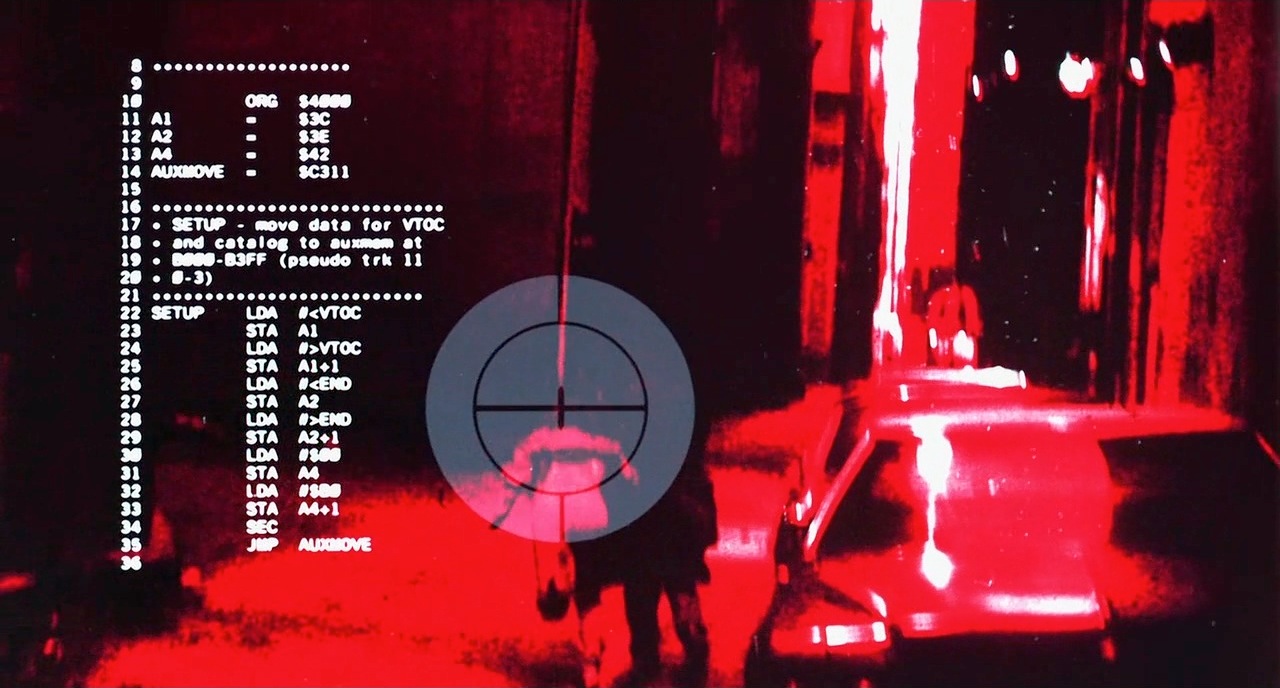 It's assembler code for MOS 6502 (NES CPU) and there is detailed explanation of sources of this code:
https://youtu.be/YRnnjoiSV-U
In short: it were sources for Apple II from magazine "Nibble" (august and september of 1984). Code above is fragment of RAM-disk "NEWRAM".

...MOVE DATA FOR VTOC... is clearly reference...
But something is wrong. It's far from just copy. This code is changed in many ways...
This is fragment from movie:

This code loads high and low address bytes of symbol VTOC and saves them to label A1.
But the code in the Ion Maiden game looks different:

It's nonsense. First of all as far as I could find - operator ! is nonsense here (xor or maybe decimal system sign). Second - MOS 6502 programmer would not waste bytes in such way.
Also I doubt that .dword keyword can be met in sources of that time.

So I am curious - why they changed it or is it real program from another time?

I don't know. Maybe this is ripped from a 65816 programme listing instead?
Top

Neat find. I noticed that JMP $EA31 looked out of place (no label?), and Googling "$EA31" shows that it's an entry point for C64 Kernal ROM's interrupt handler. Furthermore, the $D4xx addresses are the C64's SID chip registers.
Top

Damn! This really looks like sound driver playing displayed DATA!
Hmmmm... Interesting... Maybe this fragment is self-sufficient to recreate music...
Damn... I bet they could do this!
I google "Ion Maiden hidden music commodore 64", but google founds nothing.
Top

Finally I download image created by Mr.Mouse/Xentax from https://csdb.dk/release/?id=182055 and load it in Commodore 64 emulator:

Here you can see and listen to result: https://www.youtube.com/watch?v=CxfSa2LexHE

It's amazing triple x3 super easter egg! xD It's tribute to Terminator, Commodore 64 and Duke 3D and assembler and MOS 6502 and you must have real skills to recover it. Amazing.

After some google I discovered also that $0314-0315 is address of interrupt service routine in Commodore Basic, so as you can see this music doesn't interrupt Basic interpreter from working - SETUP routine just return control to basic.
I still don't know why operator ! is used to save address of PROC and how and where is it supposed to work, but in implemetation of Mr.Mouse it is replaced by < and > as it is supposed to be. Also .dword-s are replaces by .byte, but all other things seem to be identical.
Damn, I even wrote about this screen a lot of time ago (in russian), but didn't know all the truth: http://hype.retroscene.org/blog/977.html

P.S.
Also, I want to mention that last (short) part of code including saving of INDEX and label END is placed in the right-bottom corner of in-game screen, so program is complete really.
Last edited by aa-dav on Tue Jun 09, 2020 11:00 pm, edited 1 time in total.
Top

I don't know whether there are assemblers that accept an ! like this.
Maybe it was an intentional troll move (or a Genius Bonus) to offer the code listing with something off, that people couldn't get it to work directly unless they figured out they need to fix something first?
Top

Gilbert wrote: ↑
Tue Jun 09, 2020 10:40 pm
I don't know whether there are assemblers that accept an ! like this.
Maybe it was an intentional troll move (or a Genius Bonus) to offer the code listing with something off, that people couldn't get it to work directly unless they figured out they need to fix something first?