We need a better name for "Adventure Games."

By lack of RNG, I meant how your attacks aren't based on a dice roll. E.g., as long as your sword's hitbox collides with the enemy's hitbox, you will always register a hit, and the amount of damage you do will always be the same. Similar to the battle system in Paper Mario, you always hit for the same amount, unless there's something explicitly modifying your throughput.

Contrast to a Square/Enix game, or D&D, where you issue the command to attack, but it's random whether you hit or miss, and when you hit, it's random how much damage you do. And like I said, I don't weigh this very strongly as a "necessary" element of RPGs, and I didn't mean to make it sound like its absence was a bad thing.

Ah I see. Yeah well I think collision-based attacks is part of the definition of an action game, and since action-RPG is a hybrid genre it got to have qualities of both genres. But I see where you are coming from, and there surely are action-RPGs like Seiken Densetsu that has almost all qualities of a turn-based RPG, including hit rate calculation. And games like Hydlide and Ys where battles are automatic upon collision and based on the stats.

Paper Mario is an interesting take on the RPG genre since values are very low and often fixed as you say. It has a very Intelligent Systems feel I think, perhaps because the Fire Emblem and Famicom Wars games uses similar easy-to-calculate results with almost no randomness. Paper Mario is still mostly a traditional RPG, just in a simplified package I think.
Top

Haha! It's interesting! At first I just couldn't understand what is this topic about. And this is why...
If you ask russian "what is genre of games like Space Quest, The Secret of Monkey Island or Deponia series?" in 99% of cases you'll get answer: "quest".
According to (russian) wiki in middle of 90 some russian journalists of game magazines felt uncomfortable with general term 'adventure' (which, I agree, is really more suitable for games like Zelda) and used more and more term 'quest' inspired by many Sierra games.
Moreover, today in Russia 'escape rooms' are often called '(real) quest rooms'.
Top

I feel "quest" has a very strong connection to the RPG genre though.

I think the problem people (like the starter of this thread, Russian journalists and myself sometimes) have with the adventure genre name is that it's so broad and used with so many very different games that it starts to feel like a very generic genre name used for games that you are not sure of the genre of anymore, similarly to the action genre (though which is even broader). The other problem is probably just like Chris Covell said, not being aware of the history, that the first game in the genre was called Adventure.


This also leads to the open-world genre that is popular nowdays. Or is it even a genre? It seems to be applied to a very large amount of genres, as long as the game is very non-linear and have very varied gameplay. I have even seen Taito's Western Gun being mentioned as the first open-world game just because you can move in all 8 directions and aim in other directions or something.
Top

From russian gamer point of view this connection exists, but is weak and 'solid'.
There is some details about it.
Term adventure has direct translation to russian: 'prikluchenie (приключение)' and has very similar meaning 'something what is happening'.
But there is no direct translation of term 'quest'. At least we do not say similar words (like 'поиск/search') in the same patterns. Like 'quest for glory' - in russian it will be like 'in searches for glory' and it's not noun. I'm not very pedantic here, but main idea is that it's not typical usage for russian language. So our game magazine journalists just didn't translate this term and it becomes loan word 'квест (kvest)'.
So, in our language there is no uncertainty - it's just 'broken' loan word which means different thing in english (lol). And it's fun. I even didn't know before this topic that term 'quest' isn't at least synonym for this genre in english.
As for RPG - then messages like 'NEW QUEST!" appear it's not questinable why. 'Quest/Kvest' is something there you seek, do and get reuslt. Isn't it? Yes it is. So why bother of usage of this term anythere else?

It becomes totally organic in russian game culture.
Probalby it became even some kind of https://en.wikipedia.org/wiki/False_friend
Top

Even when you look at the idea of how "quest" has such strong connotation with RPGs, think a moment about why: Someone gives you a quest. You have to retrieve this item from this cave, or find medicine for a sick child, or whatever. Isn't that EXACTLY what you do in those "Adventure" games? Sure, they may not revolve around combat mechanics, so maybe you don't solve the quest by killing 20 rats, but fundamentally it is the same concept: you are given a direct in-world task to resolve. And that's what you have to in games like Monkey Island and Space Quest. You are given a task to perform, in fact, a series of layered tasks to perform. We could say: a series of layered quests to solve.

I mean seriously, when you think of "quests" in video games, aren't those tasks the closest you come in that game to what we know of from an "adventure" game?
I meant that question very honestly; I want to hear others' opinions. Do you think that's a valid statement, or is it just me?
Top

Now when I think about it, "adventure" is also a term that is very RPG. The main characters are usually some kind of adventurers. And like Russian, Swedish also doesn't have a good direct translation of the English "quest", so the word used in Swedish RPGs like Drakar och Demoner is äventyr (adventure), though the English word is also often borrowed and used as is ("Dragons and Demons" is the most popular Swedish pen-and-paper RPG and based on Basic Role-Playing/RuneQuest rules). Besides, RPGs and adventures are closely related genres.

Marscaleb wrote:I mean seriously, when you think of "quests" in video games, aren't those tasks the closest you come in that game to what we know of from an "adventure" game?
I meant that question very honestly; I want to hear others' opinions. Do you think that's a valid statement, or is it just me?

But with that logic I'm not sure what the name change is supposed to solve? The biggest problem I see with the name "adventure" is that you don't immediately can tell what type of game it is, unlike for example the platform game genre. Also both "adventure" and "quest" are just very common English words that are commonly used in many genres. Every main series Mario game is an adventure and Mario's strife to save the princess is basically a quest, yet it's not an adventure game. So how is "quest" more genre describing than "adventure"? I think it isn't. In RPGs, a quest can be any little goal or mission you do, like finding a cat for a little girl and 100% non-combat-related. Also I don't agree that questing is EXACTLY what you do in adventure games. Although it applies to many of them it isn't even a thing in many others of them, since there are so many murder mysteries and whatnot in the genre, while the broader "adventure" can be applied a bit more loosely to about any adventure game.

I think the problem is basically that the adventure genre is very broad, so it's not easy to give it an immediately recognizable name in the first place.
Top

I disagree, a game being classified as "adventure" tells you that it's not a sports game, a racing game, a puzzle game, etc, so the word as a category isn't totally useless.

Maybe we should consider things like movie genres to help narrow down some ways that these genre names are used in our localities. For me, an action movie would be something with lots of kinetic energy, so lots of stunts, running around, the characters thinking quickly, and things generally moving along with a more rapid pace. An adventure movie would be something like LoTR, where the focus is much more on lore, plotlines, dialogue, and the overall journey the characters go on.

It's only when you introduce the concept of player input that anyone gets confused about what constitutes an adventure or not, so maybe that's the goal of this exercise; to consider "adventure" as a category which implies some storytelling and environmental elements, but not how the player interacts with the game.

About the word "quest", I always saw it as the "current objective" mechanic. So a game might have multiple quests you choose from, or it might just have one. Use of the word "quest" as a genre would be unfamiliar to me, but nonetheless I don't have objections about using it to refer to games similar to the Sierra classics. (Though, I always called those "point and click adventures")
Top

Drag wrote: ↑
Sat Jul 04, 2020 6:31 pm
I disagree, a game being classified as "adventure" tells you that it's not a sports game, a racing game, a puzzle game, etc, so the word as a category isn't totally useless.

Oh really? Because if you look for "Adventure" on Steam you're going to pull up games like "Need for Speed."

Seriously though.
I had asked this question on another forum, and someone provided these snips of games that were listed on Steam as "Adventure" 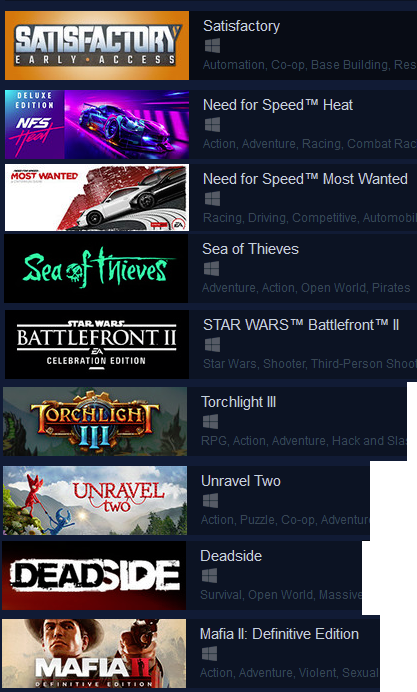 And then later showed this snip from Origin: 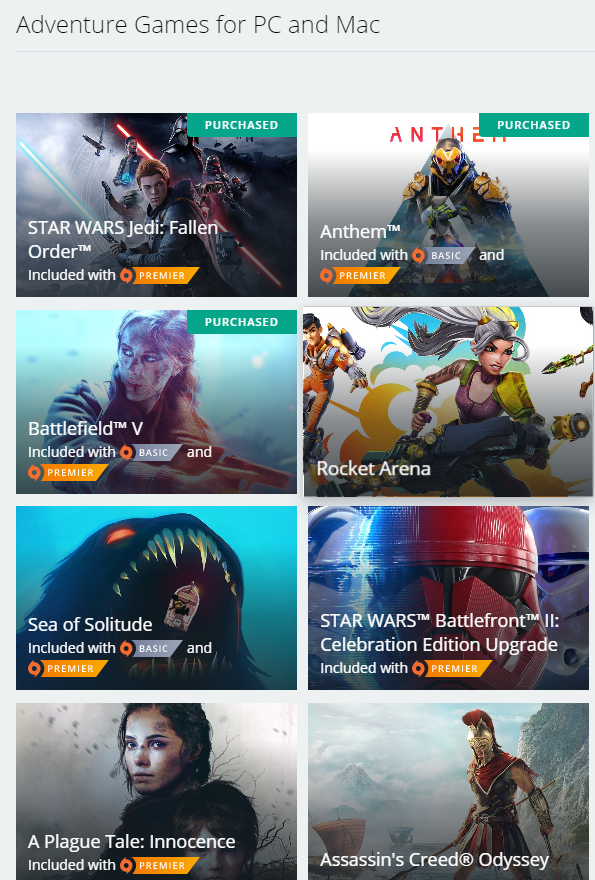 Makes sense, Need for Speed Heat is a racing-focused adventure game after all (it even has exploration elements), and that's pretty different from something like Gran Turismo, which is racing-only afaik.
Top
Post Reply
40 posts