Looking for feedback on my game

UPDATE: version 0.1.2 released.
This new version includes a new results screen at the end of levels, and will track and save collecting gold coins and cards.
If you played either of the older versions, please do not try to load your old save file. (You can still access/delete your old saves through the main menu.) 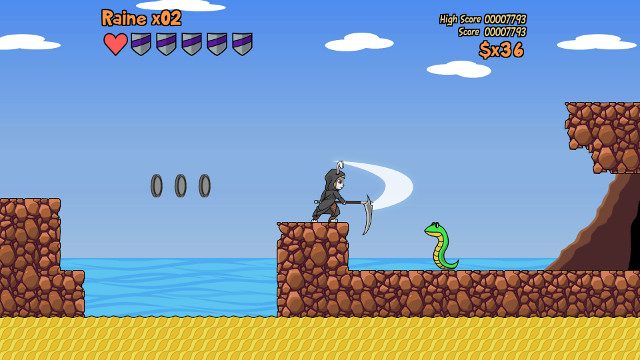 It's growing on me.

I think the knockback needs to be toned down a bit - I keep getting thrown off ledges in the Basil forest because the knockback is about as long as some of the ledges, so if you get hit at all, you're dead.

Having levels that have to be completed in different ways in order to 100% the game is good, and having to complete it with the different characters can be good, too. The collectibles (cards, the sandwich that I couldn't reach in the one level) are good too.

I still think there's not much that differentiates the characters. Marcus and Elise have ranged attacks, but Elise's boomerang has about the same range as Marcus's wand, and is about half as strong, and it doesn't always hit twice due to enemy invulnerability. Raine has only a melee attack that seems to do as much damage as Marcus; she can dash, but the dash doesn't make her invulnerable and getting damaged interrupts it. They all seem to have the same mechanics otherwise, which means that you're better off with Marcus the whole time.

Jumping out of the water is still pretty finicky.

On the whole, though, it seems to play pretty well. I was going to complain about how slow the movement is on the world map, but I can see that it can be different in different zones. I like the wipe effects, too - maybe each character could have their own specific wipe styles?
Top

I haven't actually changed it yet. I agree that I should, but I'm not terribly concerned about fixing the water mechanics until I'm creating some actual water levels.


rox_midge wrote: ↑
Thu Jul 16, 2020 8:02 pm
I was going to complain about how slow the movement is on the world map, but I can see that it can be different in different zones.

I did that just for some of those maps where I "borrowed" the map from another game. While testing things I was getting super annoyed by the travel time, so there is a boost effect on those maps.
Really I'll set a standard speed on the maps when I have more of my maps finished, since that's where it's going to matter. Of course, that's also going to be pretty far down the road; when I'm more certain about how many levels and areas are going to be in the game.


rox_midge wrote: ↑
Thu Jul 16, 2020 8:02 pm
I think the knockback needs to be toned down a bit - I keep getting thrown off ledges in the Basil forest because the knockback is about as long as some of the ledges, so if you get hit at all, you're dead.

Does anyone have any comments about the length of the levels? (Not counting the intro level; just the two desert levels and the forest level.)
Do they feel too long, or too short? Do they feel too challenging or too easy?
Top

They feel a little long IMO. I still haven't been able to work through the forest level all the way, and I was able to beat the desert levels (more like dessert levels, amirite), it took a lot of attempts, and because of the branching nature, I felt like I wasn't able to see everything.

It also looks like you only get credit for the stuff you collect between your last checkpoint and the end of the level if you have to start over from the checkpoint.

The enemies respawn when their spawn point scrolls about four blocks offscreen. So if you've defeated a snake and you jump up to a platform and then fall off the platform, the snake is back. Or if you beat a turret and the place where it was scrolls offscreen, and then you get knocked back by an enemy, the turret is back, which can complicate the fight with the enemy that knocked you back in the first place.

You can't duck to avoid the turret's projectiles. Raine can destroy them in flight, which is nice, and she can attack quickly enough to get them all out of the way, but with Marcus and Elise, if you're in a place where you can't jump out of the way, you essentially have to take damage in order to defeat the turret.

Enemy-on-enemy damage is inconsistent. The rock snakes can damage other enemies, but the turrets and fire snakes don't. The rock snakes also can't aim very well, but, you know, they're snakes, so I guess I shouldn't be so judgy

I made some big changes to the characters to make them more different from each other.
I'd like to know if it's fun/interesting enough to play as a different character; even through sections you've already cleared with someone else. 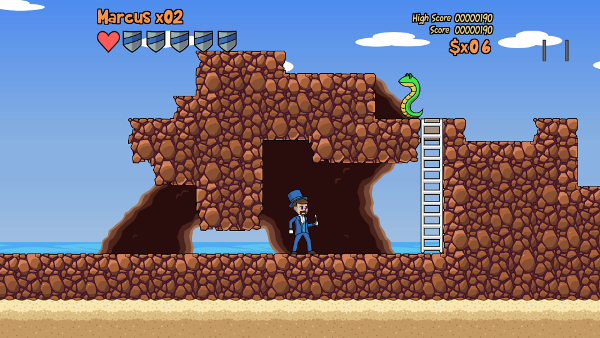