Castellated vias are OK, but...

Castellated vias are OK, but...

I don't mind castellated vias because they're easy to solder and you can visual verify a good connection. But soldering through vias to pads underneath them, I don't know if there's a special name for this, but I very much dislike it!

Have you ever spent more time than you care to admit trying to figure out why something isn't working only to figure out that it was something so incredibly simple? Well I finally have one that beats this one for me. I installed this mod board on my Sd2snes back in August, and it was working fine. I got the PCB with 0.8mm thickness from OSH Park, but that's still a little thick to be soldering vias to pads underneath.

A few days ago I used my Sd2snes for the first time since August, and MSU1 audio wasn't working. I immediately thought it was one of those vias, so that was the first thing I checked. I used this pic to check every connection for continuity, but found nothing wrong. So I checked for shorts, and rechecked for continuity many times. I thought maybe I messed something up because I have a Rev.G Sd2snes that requires a bodge wire. So I kept checking and checking, I was even about to post a thread here asking for help when I finally realized... It WAS one of those damn vias! 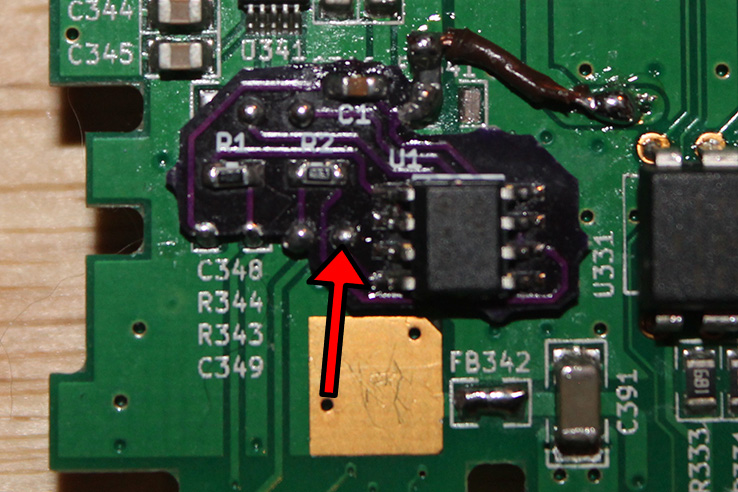 You know when you use the side of a probe of a multimeter on a solder joint, if it's a real shiny and smooth joint it doesn't always make a connection? So you sometimes have to sort of stab the point of the probe into the joint to make sure it's making contact. Well, it turns out the solder joint that the arrow is pointing to in the above pic was bad. But if I pressed down on it, even kind of lightly, it made good enough contact with the pad underneath it that it would get continuity.

That via happens to be the only ground connection to the ground pin on the IC. Even when I checked for continuity between the pin on the IC and another point on the Sd2snes, pressing down on the leg of the IC with the multimeter probe was enough to get that via to make contact with the pad under it. So even though I checked this thing six ways from Sunday, all connections showed "good" because of this. When I finally figured it out, it was one of those "You've got to be kidding me!" moments. Next time I order a board that has via connections like this, I'm going to order a thinner PCB if possible. And the next time I'm having an issue with something that uses through via connections like this, I'm going to reflow all of the connections before I even bother with the continuity checks!

Anyway, just thought I would share this for a laugh.