New user, just signed up to share a project in which I'm designing and 3d printing a custom shell for making music with the NES. The design is meant to be an all-in-one unit that is as easy as possible to implement using mostly existing parts (including all original screws from the NES and controller) and I'm hoping other who use MidiNES, Chip Maestro and/or Famimimidi are interested enough to justify a large order of the parts.

For starters, here's the design with everything implemented - NES main PCB, power board, midi-capable cartridge (of choice) and controller board/buttons/pads have all been worked into a form factor that is smaller and slimmer than the original NES and there is additional room for modding. For my prototype, I'll be implementing the NES stereo mod. All of the screws used to fasten the system together can be taken from the original NES. 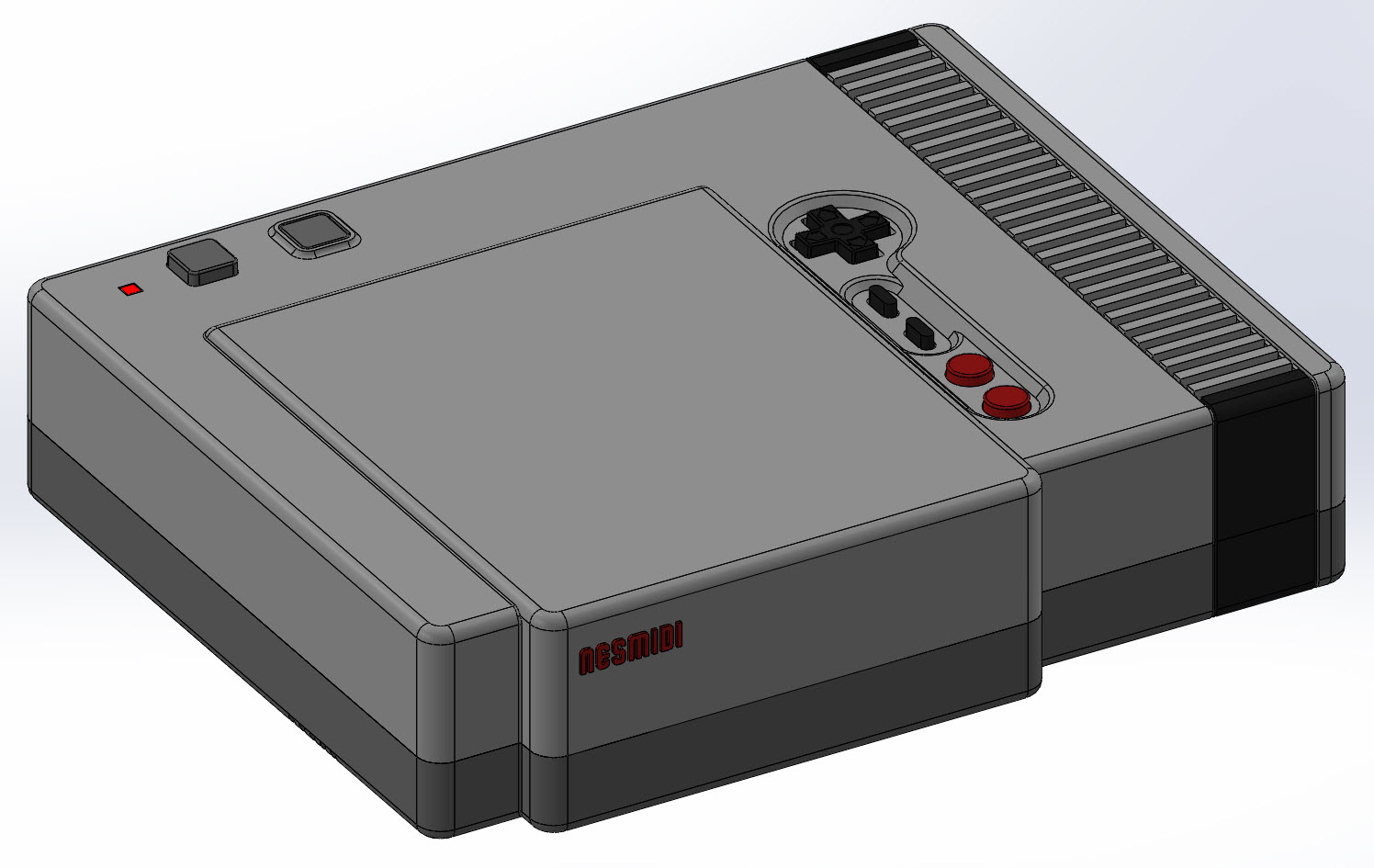 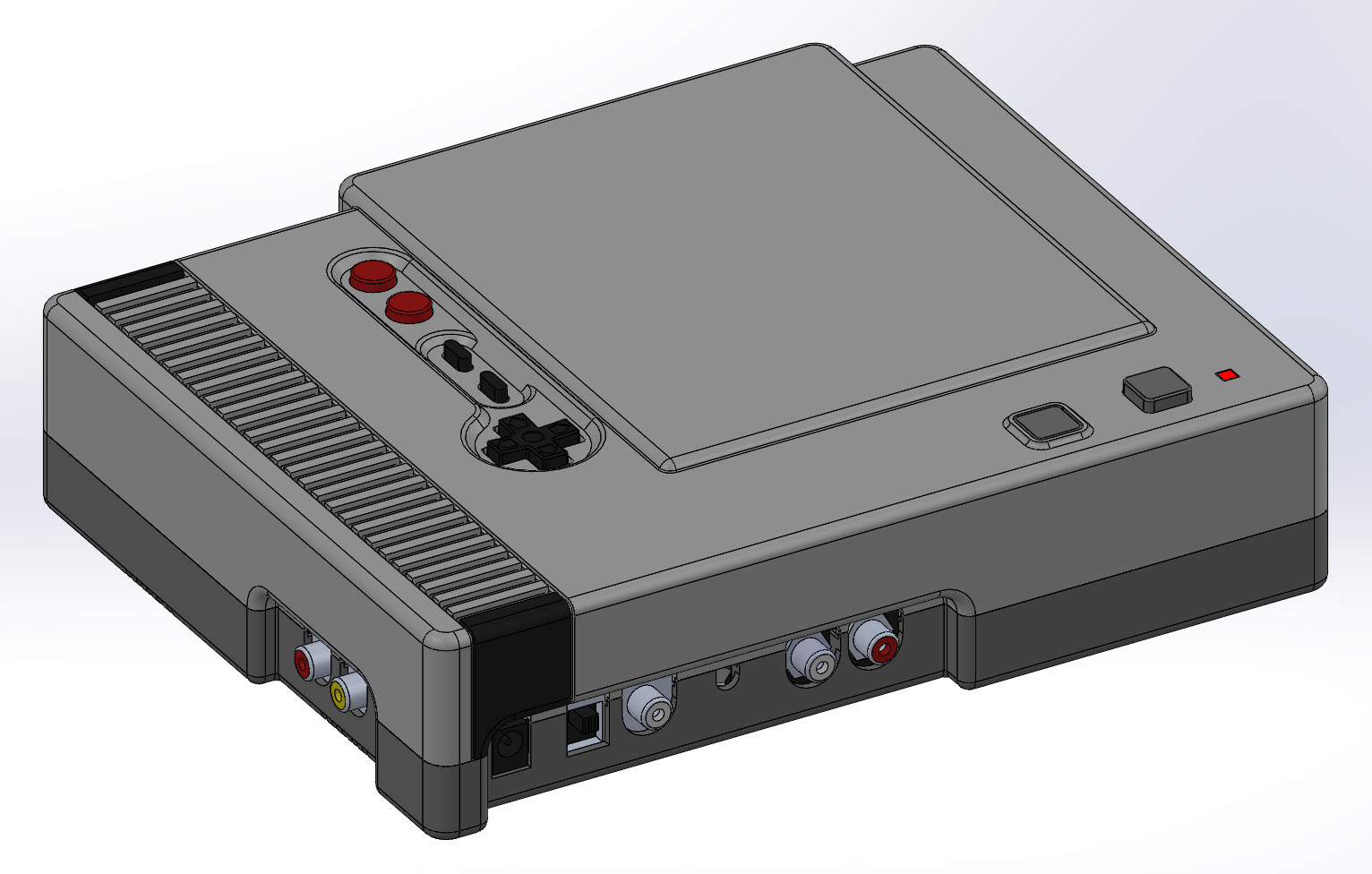 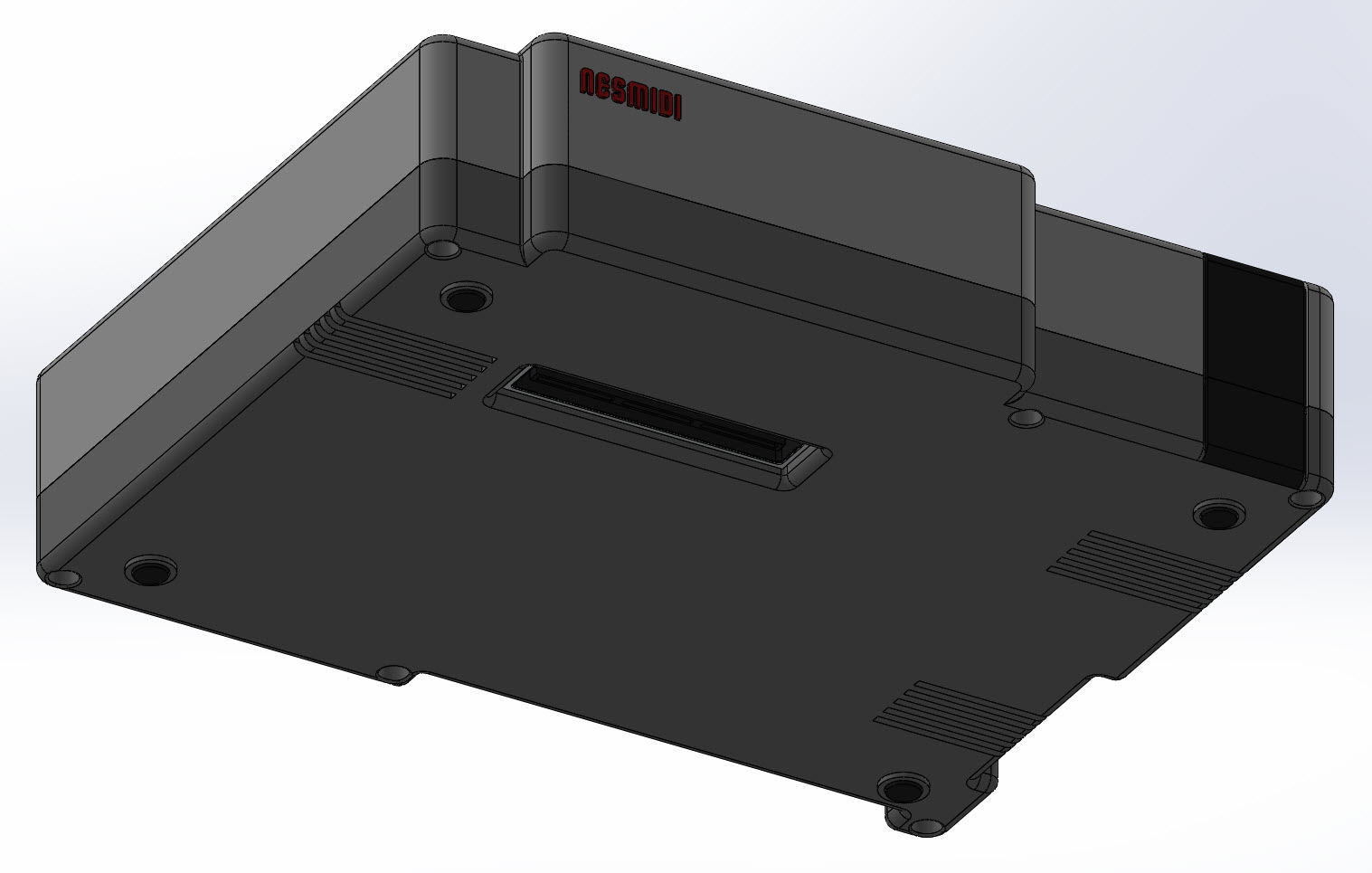 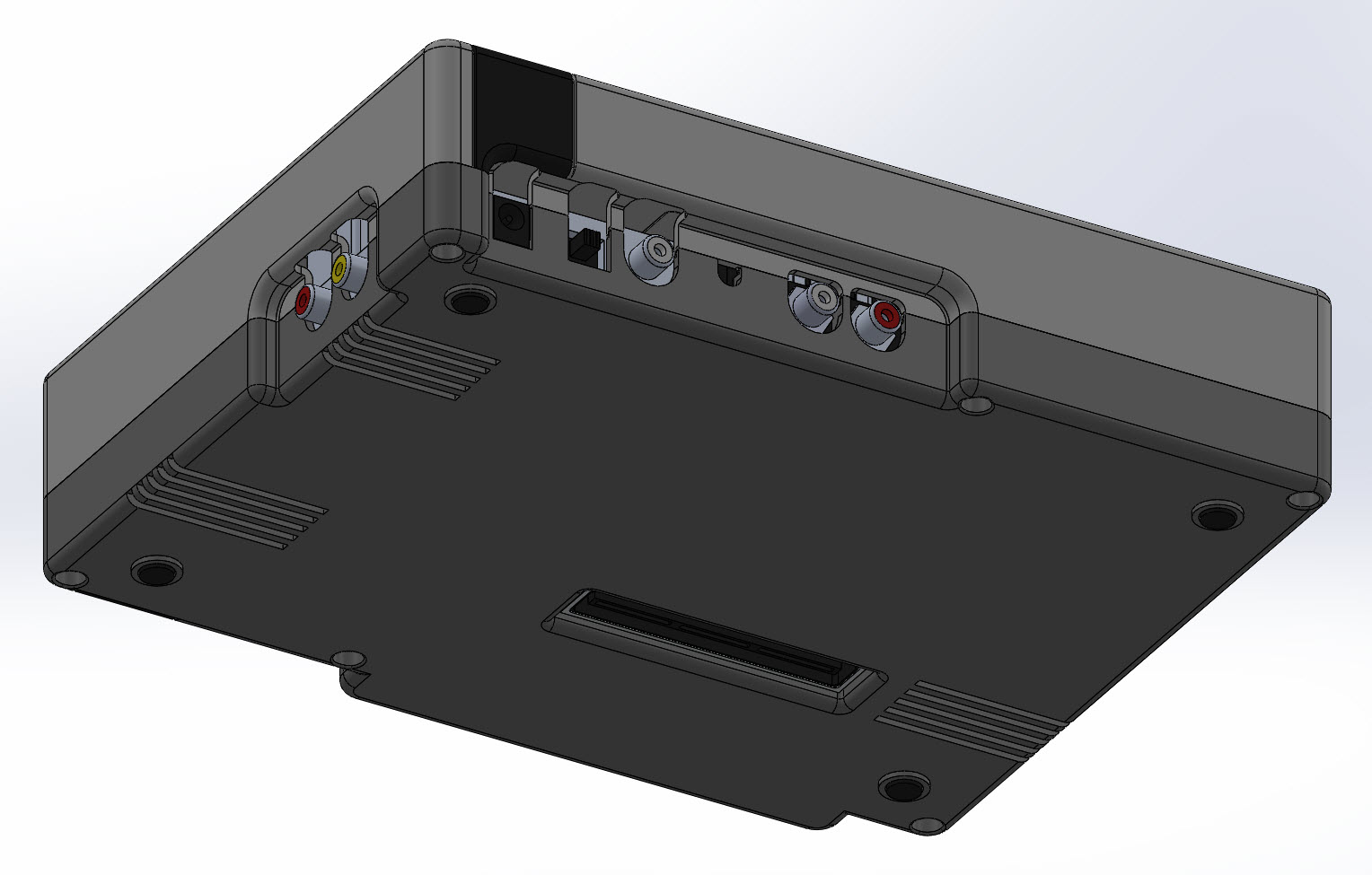 And here it is with the top shell removed so you can see the inside layout: 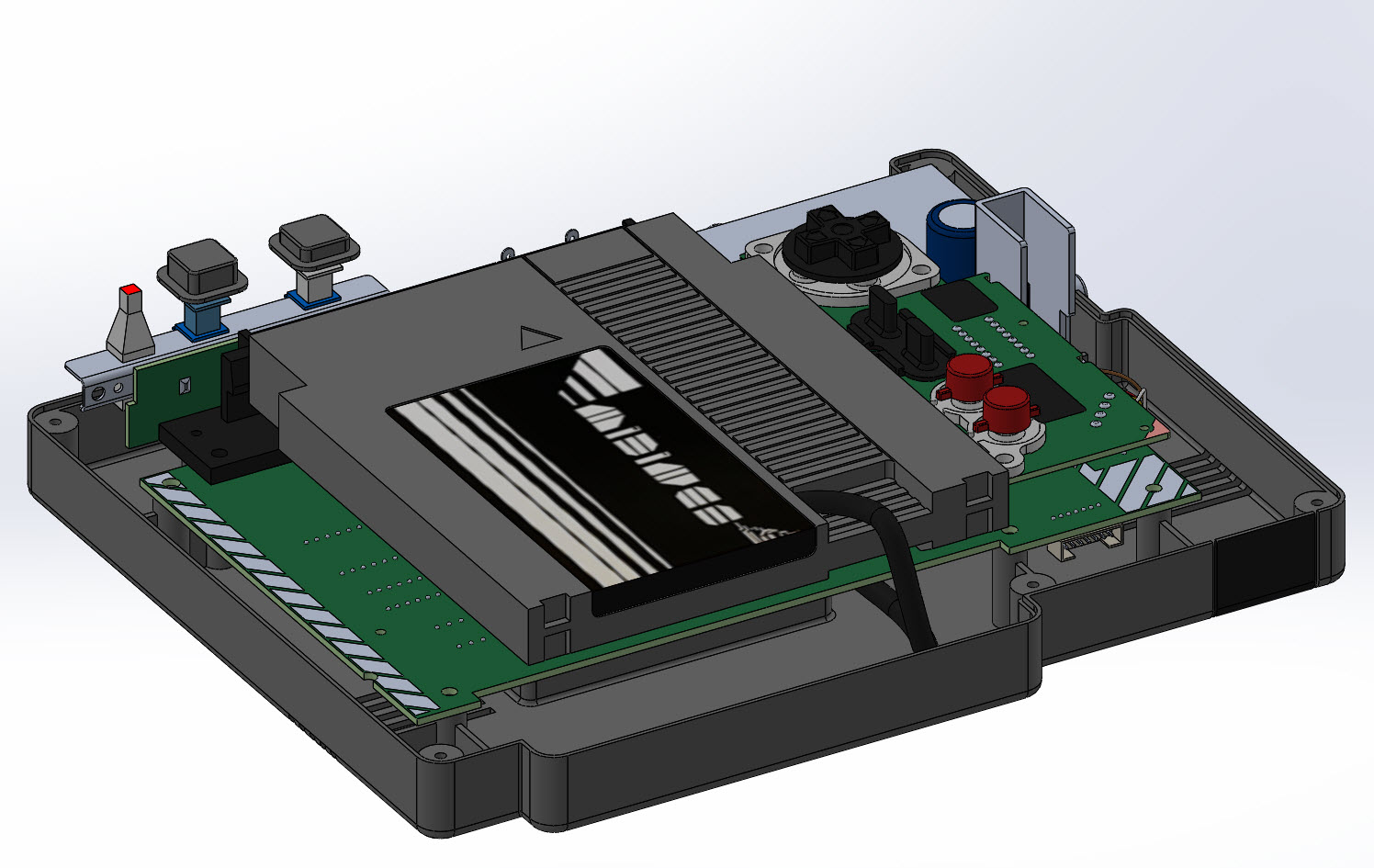 The power board is oriented vertically to decrease the overall footprint so the power and reset buttons, along with the original LED, is on top of the system. It attaches to the top shell via the same screws that attach it to the bottom shell of the original NES: 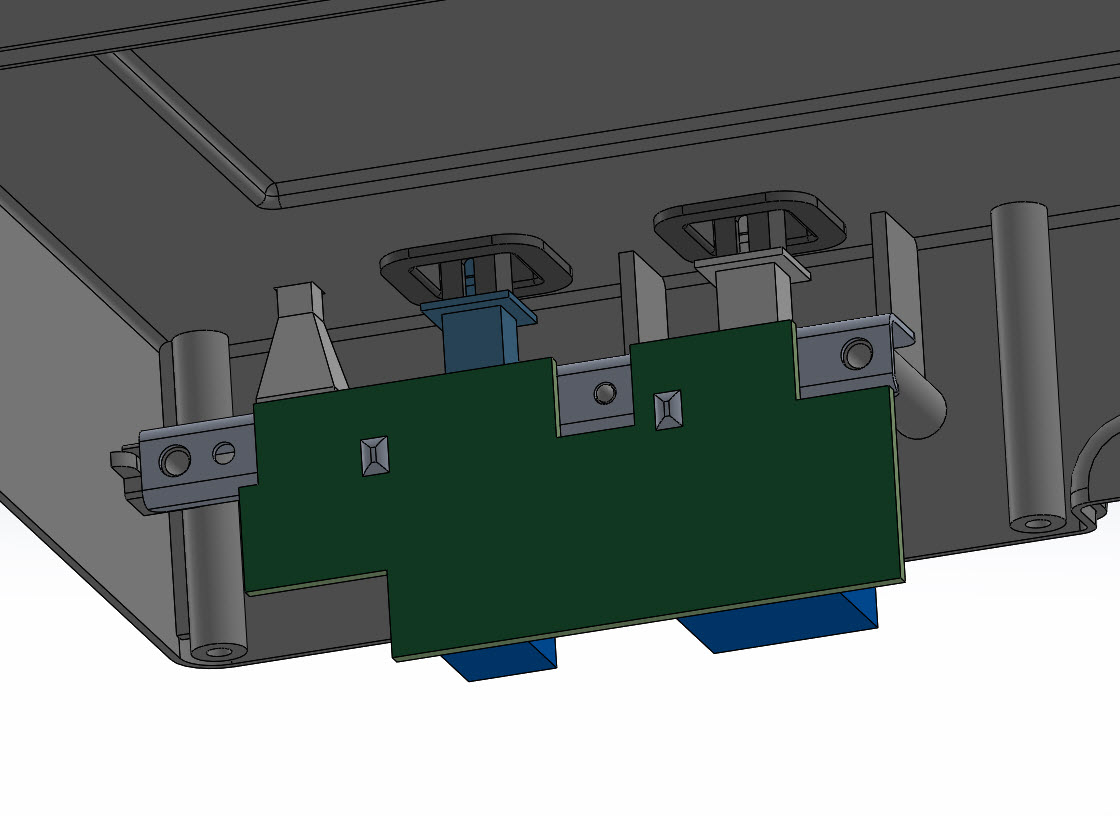 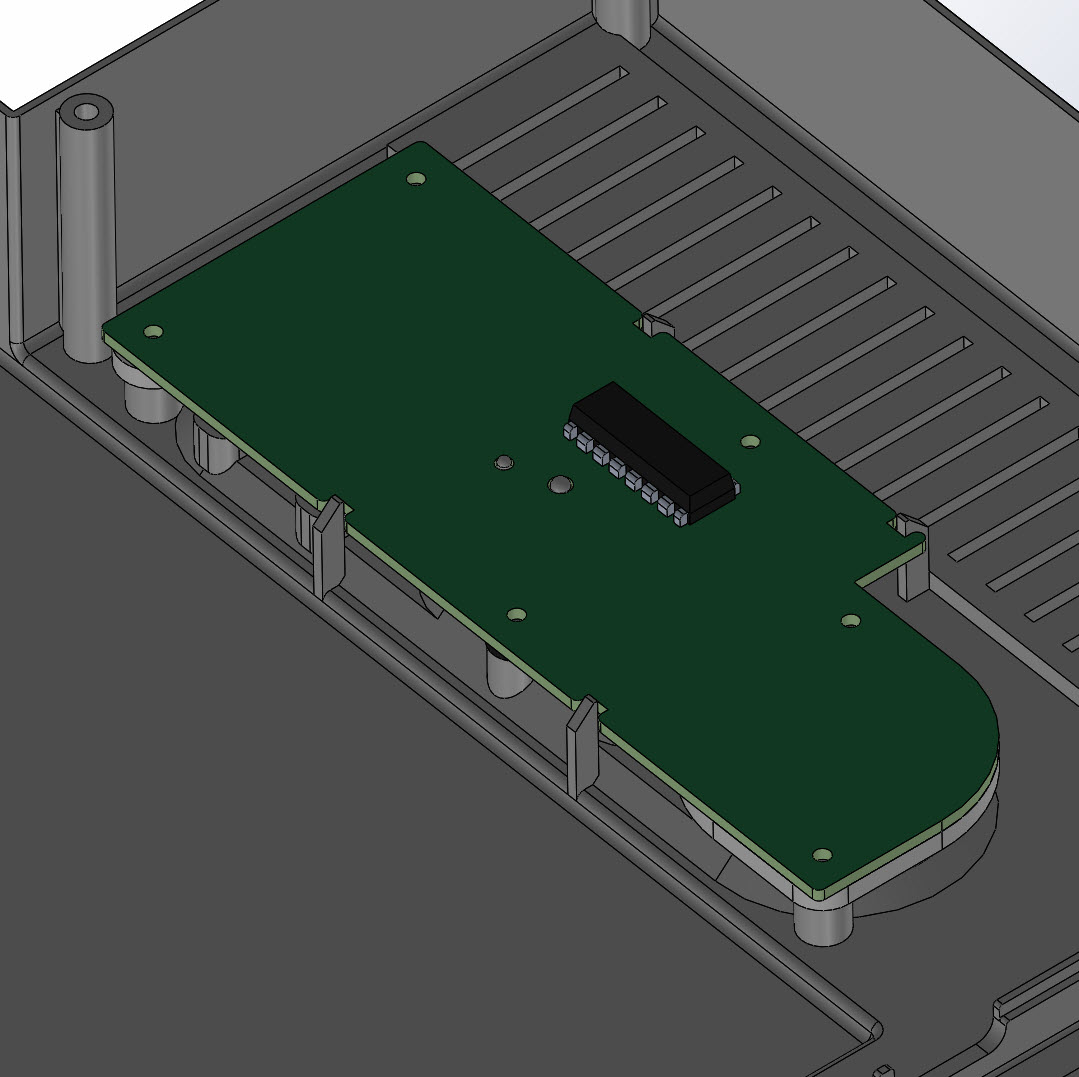 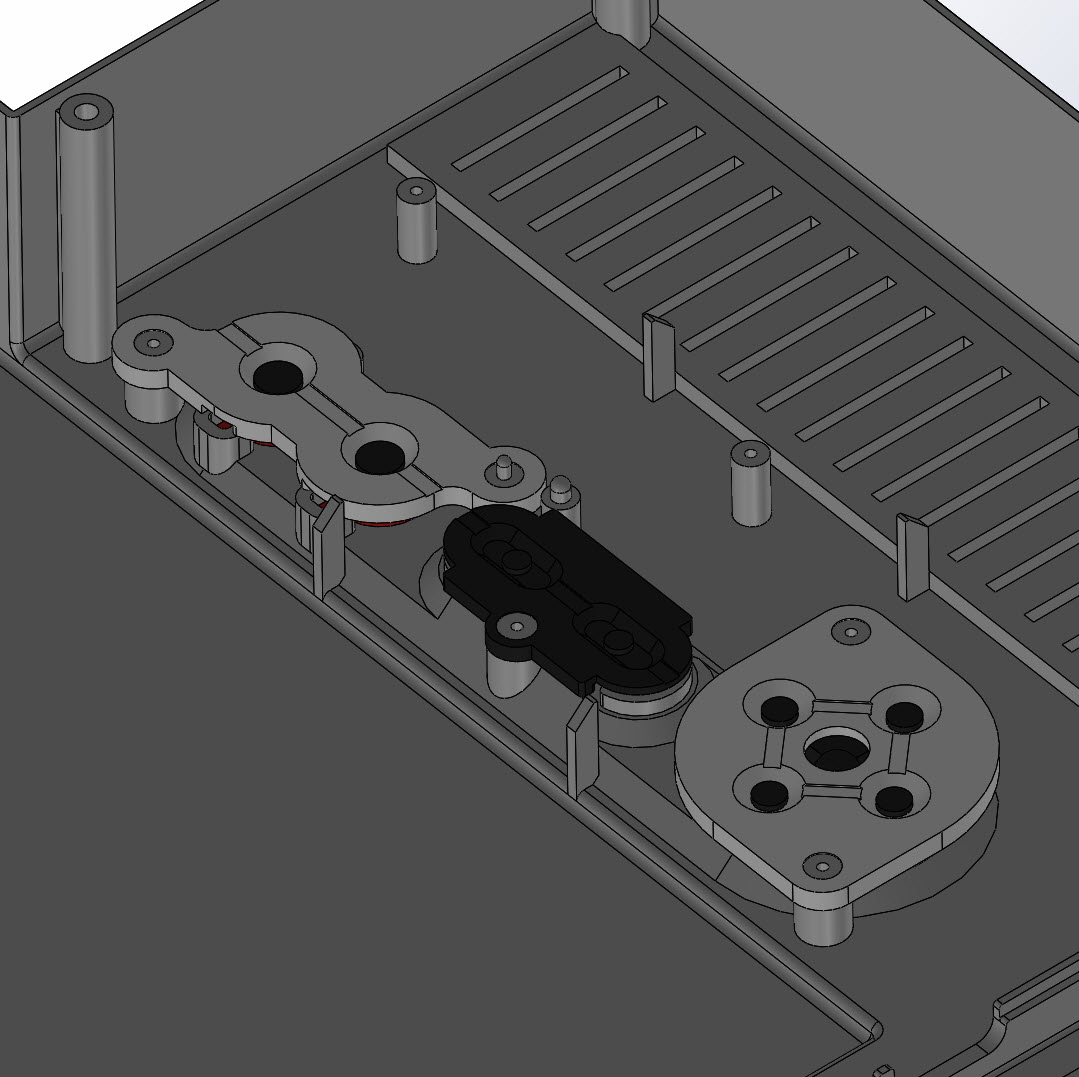 For audio mods, I've created a separate bracket that slides into the back of the bottom shell and attaches more securely via the screws used on the original NES to attach the controller port cover to the bottom shell.

Here is the section where that bracket and RCA jacks go: 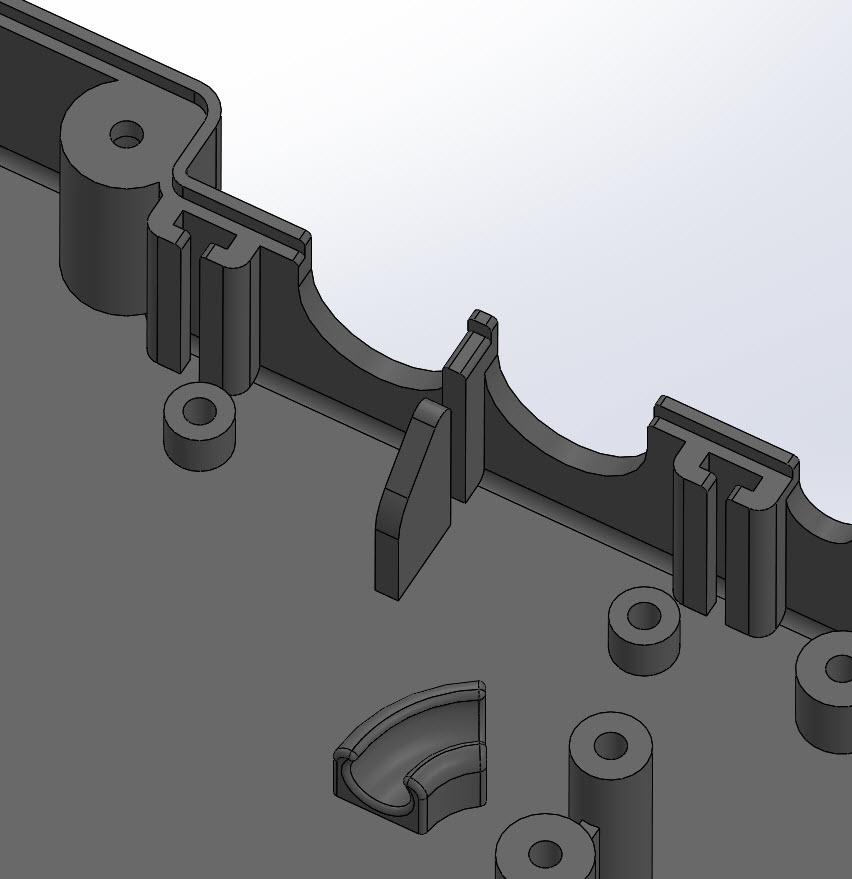 Here is the bracket in place: 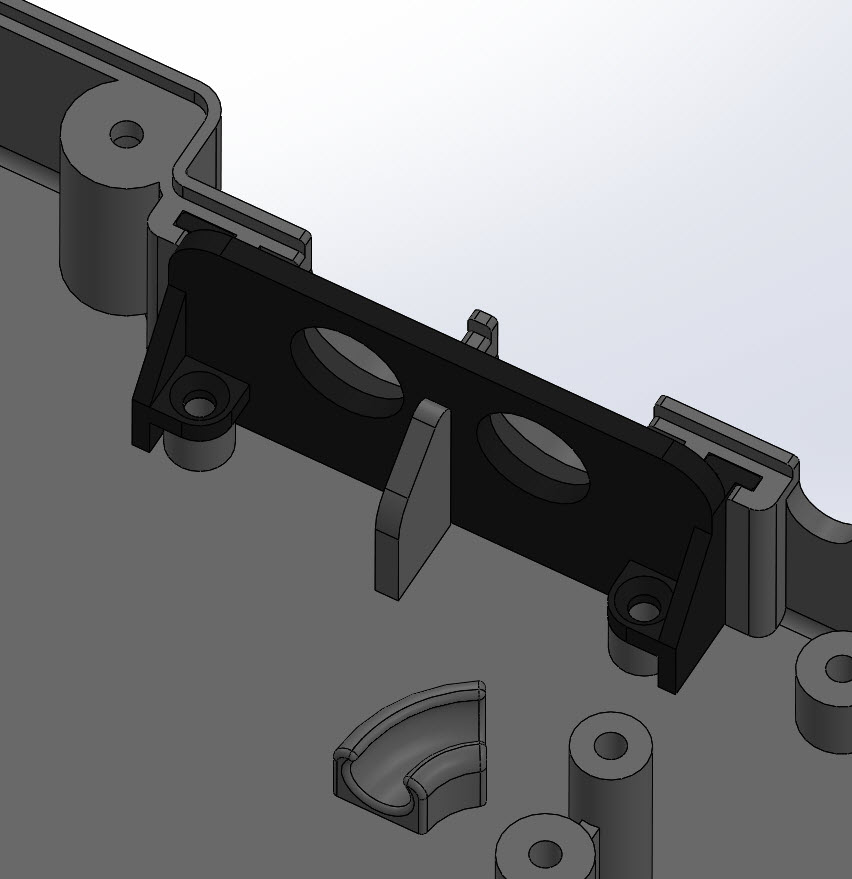 And here is the bracket with RCA jacks installed: 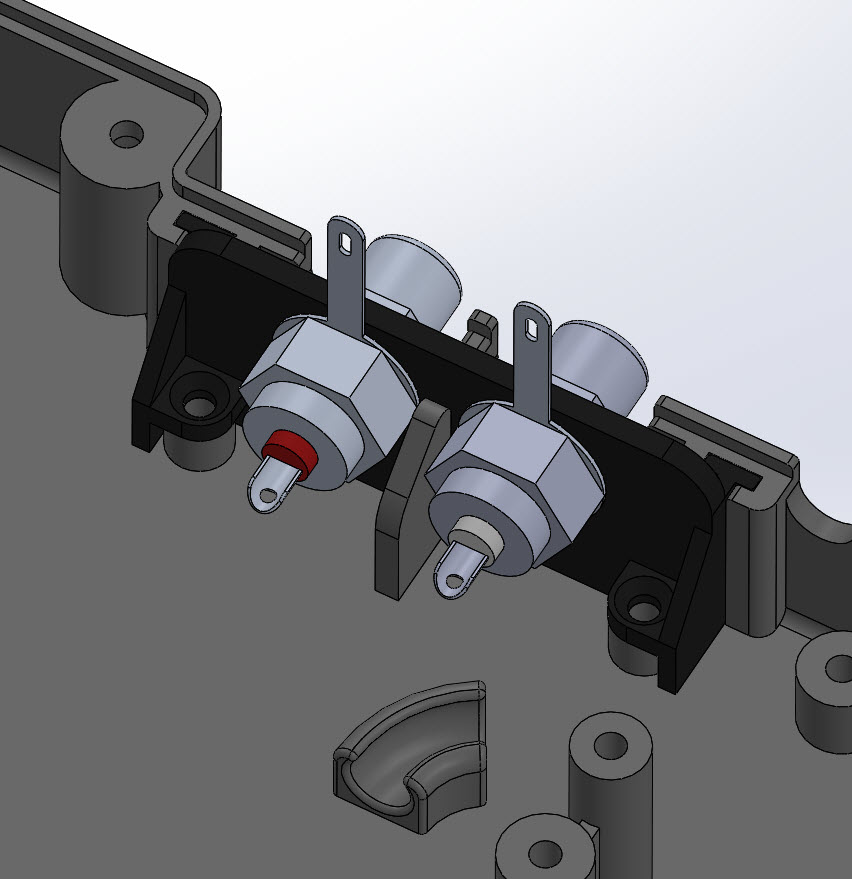 I designed it with the bracket to make installation easier so the jacks don't need to be soldered within the main shell and can be soldered separately to the bracket (easy access) then slid in during assembly. Also, I'll be designing an alternate bracket that covers the holes in the back of the system for anyone not doing a prosound mod. Various other jacks may be used as well with minimal modification.

I'd love to hear everyone's thoughts and get some feedback! There are other features that I didn't mention here but suffice to say, this will be an ongoing project to improve the design so feel free to chime in!
Top

The only thing I notice missing would be some wire channels for the expansion port. I'm doing some music stuff over the controller port, I'm streaming audio register data but haven't added MIDI into the software yet. Next I want to make an expansion port version of the adapter, and that will require having a USB cable under the NES. I'm not sure yet which side it will exit from, though.
Top

The only thing I notice missing would be some wire channels for the expansion port. I'm doing some music stuff over the controller port, I'm streaming audio register data but haven't added MIDI into the software yet. Next I want to make an expansion port version of the adapter, and that will require having a USB cable under the NES. I'm not sure yet which side it will exit from, though.

I'm not familiar with that mod but I'd definitely like to implement it. The hold up at the moment for me is not knowing the variety of options. I know that any of the current cartridge options will work with the design since they all work pretty much the same way - the only exception being Famimimidi which has a female DIN connector so the male-to-male cable that one would use to hook it up to their MIDI controller would need to be plugged into that under the PCB (which should have just enough room for that) then the additional cable fed out the back.

In terms of the sound expansion, I would need to make the overall shell a bit taller to make more room under the port. As is, I haven't designed any way to implement any of the expansion options since, as far as I know, none of the available carts can work with those and if that's the case, then it would only be useful for playing games with those extra sounds in conjunction with the jumper on the main PCB. Otherwise, I may need to rethink the entire design...I suppose the extended chrome housing can be removed and an expansion board soldered directly to the underside of the PCB but that's not very user-friendly haha.
Last edited by Doctor Octroroc on Sun Mar 08, 2020 2:10 pm, edited 1 time in total.
Top

Are midiNES carts all that common? I wanted one back in the 8bc days, and 8bc kindof died shortly thereafter... I wouldn't be surprised if there were still some original backers who didn't get theirs.
Top

bunder wrote: ↑
Fri Mar 06, 2020 8:13 am
Are midiNES carts all that common? I wanted one back in the 8bc days, and 8bc kindof died shortly thereafter... I wouldn't be surprised if there were still some original backers who didn't get theirs.

There were unfortunately a LOT of people that didn't get theirs. Apparently the guy who made them had a bunch of medical bills and couldn't keep up with the orders but kept taking money - giving the benefit of the doubt, I assume he intended to fulfill them once the dust settled but probably got too far behind and couldn't come up with the money to buy parts or send refunds. He also apparently refused to share the source code so it took awhile for anyone else to recreate the concept. It's a shame, he really did a great job with it (I've had mine for about a decade and it still works like a charm).

However, there are other alternatives, both of which are compatible with this design.

Chip Maestro was the next thing to hit the market after MidiNES (looks like they're working on making more).

More recently, Catskull Electronics made the Famimimidi available. I haven't gotten my hands on it yet but it's supposed to give more control than either of the others. The trade-off is it's not as user friendly but familiarity with the MIDI CC's should be all one needs to get started.

So any of these three, whether you managed to snag a MidiNES back in the day or opt for one of the other options, will work as they're all cartridge based and the DIN cable extends from the same position on the cart.
Top

So I've done some pricing and if I can get 10 or more people interested in kits for this, the price goes down considerably per set. In the spirit of DIY, I'll be calculating everything so that everyone would pay as close as possible to the cost of printing. Any extra would go towards prototyping and shipping the units, and I would also consider offering assembled versions with the NES stereo mod for those who have a NES, controller and MIDI cart they want to contribute to the build. For those using Famimimidi, I would also need the m2m MIDI cable that plugs into the female jack connected to the cart or it would be a bit extra for me to acquire one myself.

After that, all you need is a functional NES and your MIDI cart of choice to build the thing. The design may also change slightly resulting in less pieces and/or lower cost. I'd also take everyone's input to make it as good as it can be!

I unfortunately won't know the final prices until I know how many people are on board but it should be $150 or less for the kit and I'd do $220 for the fully built modded system for those with a NES/controller/cart to send my way - I would acquire the items needed for the stereo mod myself and those have been worked into that price.

Anyone interested? Sound off below with what you would want and what components you have already if you want the fully assembled one!
Top
Post Reply
6 posts • Page 1 of 1