I just got an pirate cartridge of Jackie Chan.
The interesting part about the board is that it seems to have been designed to support more than one pirate MMC3 clone.
It also have space to what I think is a CIC stun circuit.
The capacitor was added by me, since it was glitching alot. This solved the problem

An interesting fact is that it has a japanese label in the back.
The game is the japanese version.

It also have some built-in cheats that are hinted in the label.
I asked Zxbdragon and he told me the two cheats that this game has:
Stage select - Press down on title screen and B as many screens you wish to skip.
Recover energy - Press start + select during gameplay. You'll recover after the next hit.
Since the game is a standard MMC3 one and I could dump it perfectly with TapeDump, I think it's not necessary to disassemble and photograph it.
In case someone wants this game version, I'm posting an IPS file:

Many thanks to CCovell for TapeDump and JRoatch for the UxROM version.
Also Zxbdragon for finding the cheat information and telling it to me.
Top

I have the same cart in 60pin format. PRG/CHR chips have the same marking (JY-12 & JY-13) but the MMC3 chip was manufactured by NTDEC! And it seems to work just fine on my Famicom so I guess there is some weird stuff going on with your cartridge.
Top

THe non-soldered chip pinout almost matches the regular MMC3, while the soldered is something bizzare, don't even matching the second MMC3 from NTDEC:
http://wiki.nesdev.com/w/index.php/MMC3_pinout
Top

MLX wrote: I guess there is some weird stuff going on with your cartridge.

It only happened when using the GameGenie. The capacitor seems to have fixed it.

Does yours also have the cheats enabled?


Maybe the soldered chip could be the (in)famous 9112 MMC3 clone?
I have not looked at it thoughly, but by the position of PPU A12 (where I've put the deglitch capacitor), it seems to be a match.

A good idea should be to try to get another MMC3 compatible chip that fits this board and use this one to reactivate the old, dead one I have.
Top

Yea, assuming that the tracks in top layer are like here:

It's pinout is the same like in 9112 (with exception that PRG RAM /WE and PRG RAM +CE are reversed, but maybe that is your fault) 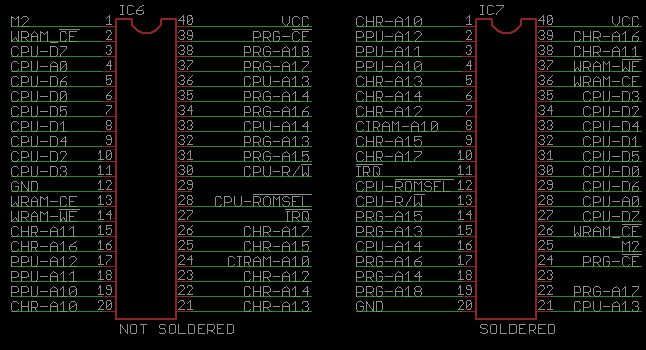 Could you check if PIN19 of the soldered MMC3 is connected to anything?
Top

Sure. I was in doubt about these pins, since at the board I first looked at they were connected to nothing.

krzysiobal wrote:Could you check if PIN19 of the soldered MMC3 is connected to anything?

It's not connectet to anything.
The same that happens on the other board here.
This was the board I used as refference.

I'm not sure if it was dead when first I got it.
It was a long time ago (~20 years) and If I remember correctly it was also a Jackie Chan game.
When I finally was able to try to read the ROMs, all I got was FFs.

I still hope to find and install a working MMC3 clone in this board and put some ROMs with a game on it.
Top

The PCB is identical to my doki doki yuuenchi: 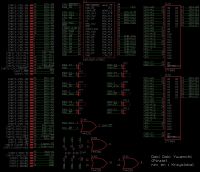 It is MMC3 in NTDEC pinout, those solder pads are for selecting what PRG/CHR pins !CE and !OE are connected to and or gate for generating single enable signal to CHR-ROM (its DIP28 128KB)


I still hope to find and install a working MMC3 clone in this board and put some ROMs with a game on it.

You can but AX5202P on aliexpress - I bought 2 of them some time ago for 2$/piece and they were fine (pinout like AX5202P #1 in http://wiki.nesdev.com/w/index.php/MMC3_pinout)
You should make adapter for your board because this pinout does not math any of those in that PCB.
Top

Nice. Seems to be the same as this board here and here!

Would de AX5202 fit on the unsoldered space?
If so, I could put this chip on the other board and the AX5202 on the Jackie Chan's board!

Actually, some very negative comments have stopped me.

Does the cheat work on yours too?
It sure makes the game a lot easier!!
Top

Would de AX5202 fit on the unsoldered space?

No, it is yet another different pinout (even the GND is not at pin 20


Actually, some very negative comments have stopped me.

Which comments? I had just recently repaired friend's MMC3 (which has IRQ pin shorted internally to GND) - i just added the missing IRQ logic on FPGA

Maybe some of the chips on sale suffer from same disease?

Does the cheat work on yours too?
It sure makes the game a lot easier!![/quote]
Which one?
Top

Actually the anoucement was deleted.
It was of a guy telling that he got 20 parts and only 2 worked.
He also could not get his money back.

But mine has M2 shorted to GND, so I don't have much hope...

I was asking about the other Jackie Chan cartridge.

Other weird thing I've seem, is that I got a Rockman 3 pirate wich had the same bug (part of the screen jumping) when using the GameGenie.
It was the botton bosses at the stage select, the weapon select while paused and some other random stages jumping.
Again, I've put the capacitor and the bug was fixed, wich is just weird!
The MMC3 clone was labeled 88. I'll post some pictures as soon as I can get some decent ones.
Top

The Rockman3 pictures I promissed: