erik343 wrote: ↑
Tue Jun 23, 2020 7:50 pm
With the composite video for the NES, how come the picture looked sharp on a CRT back in the 90's? Is it because the TV and the NES both are analog? I learned about Cathode Ray Tubes in college? But, I don't really understand why a NES with a CRT would look better than hooking up to a digital Plasma TV (composite video) directly.

No. The signal wasn't any better. CRTs are brighter, and smaller. Up close, the pixels are pretty fuzzy, but at the size of a typical CRT it's not as noticeable.

Switch to the size of a typical HD TV, and add the need to upscale, and probably an inability to deal with 240p and adding ugly interlacing lines with a reduction to 480i 30fps... the reduced picture contrast is another insult. ...but all of these things aside, the act of putting it on a much larger screen alone makes the poor definition of the pixels a lot more apparent.

Kind of the same reason that Blu-ray didn't need to exist before we had TVs like this. DVD quality was maxing out what you could really see on a CRT.
Top

rainwarrior wrote: ↑
Tue Jun 23, 2020 10:35 pm
No. The signal wasn't any better. CRTs are brighter, and smaller. Up close, the pixels are pretty fuzzy, but at the size of a typical CRT it's not as noticeable.

That's small part of it, but definitely not all of it. The issue is still with how the newer non CRT TVs capture the signal, filter/prep/process it (it's not meant of retro game consoles, it's mean for old broadcast video), and display it. I ran old game systems on really big CRTs back in the day, they definitely did not look as "soft" as they do on HD TVs - of the same dimensions. The type of filtering a CRT mask gives from an analog signal will always looks different. An SD CRT can definitely be perceived as being sharper in comparison (the same size).
Top

CRTs are certainly capable of displaying sharp pixels, and so are HD TVs, but the NES is not capable of delivering them. The signal itself is fuzzy already. Yeah a CRT has some analog filters (e.g. sharpness knobs), but they don't fix the problem, and a lot of HD TVs can do the equivalent anyway.

Without some very content-aware way of upscaling (i.e. gettting rid of the NES PPU and replacing it ala RGB mod, emulating, etc.) there just isn't such a thing as a sharp pixel from the NES. For the generic built-in upscaler any HDTV has to use, some blurring is really the best default they could choose. Something that works well on retro video games would be a terrible choice of upscaler for regular video content. You wouldn't want to watch a DVD through a Framemeister... but an NES through a Framemeister can get very good results on an HD TV, the main things that will lack vs. CRT are just latency/lag and picture contrast, but not sharpness.

So unfortunately HD TVs tend to have very poorly suited inputs for SD content. There's not much commercial reason for any TV to have a good retro video game upscaler built in, as the needs of that are kinda opposite the needs of regular video. There are external solutions for that at least.
Top

CRT SDTVs' picture tubes were focused for a 480i signal, where one field's scanlines would fill the spaces between the previous field's scanlines. LDTV sources, such as practically every pre-Dreamcast console, would instead send a nonstandard 240p signal that draws each field's scanlines at the same position as those of the previous field. This creates a more distinct spacing between scanlines, causing pixels to appear sharper vertically even though the composite bandwidth limit blurs them horizontally. In addition, you have a beam width that varies slightly based on brightness.

LCD and plasma TVs have an upscaler tuned to continuous-tone 480i images, such as live action or CGI, not 240p pixel art. They don't even try to simulate the interplay between sharpness and softness on which pre-Dreamcast pixel artists depended.
Pin Eight | Twitter | GitHub | Patreon
Top

Just throwing my two cents in, all of what tepples said is correct to my knowledge, but CRT's with a comb filter are also technically "tuned" to display 480i. Not all CRT's are even created equal in this regard unfortunately.

I have a monitor that lets me select which filter I want to use (and also offers a "both" option). Simple knowledge of how the comb filter works suffices (and lidnariq already mentioned it), but I'm just going to share my favorite example (with some photos, from my AV-modded famicom).
An easy way to test on this monitor is just to start a game of Dragon Warrior/Dragon Quest. The bricks in the King's chamber have two lines of red, followed by one line of gray, followed by two more red. On TV's with a comb filter, you won't see the gray lines of the bricks properly, and the topmost red line is also impacted by the black one above it. Only the middle red line looks largely correct in the comb filter.
Of course, comb implementation may vary depending on the hardware in use and/or the software in use if applicable.
Anyway, here are some pictures. It's hard to see here, but the comb filter does do a nicer job of keeping the edges of colorless things crisp; this is the most noticeable in text boxes with black-to-white transitions. So in a sense a CRT with a comb filter is likely sacrificing some vertical clarity for better horizontal clarity if used for progressive signals.

Click on the images for the full resolutions (warning: around 9-10 MiB each).
Notch filter only: 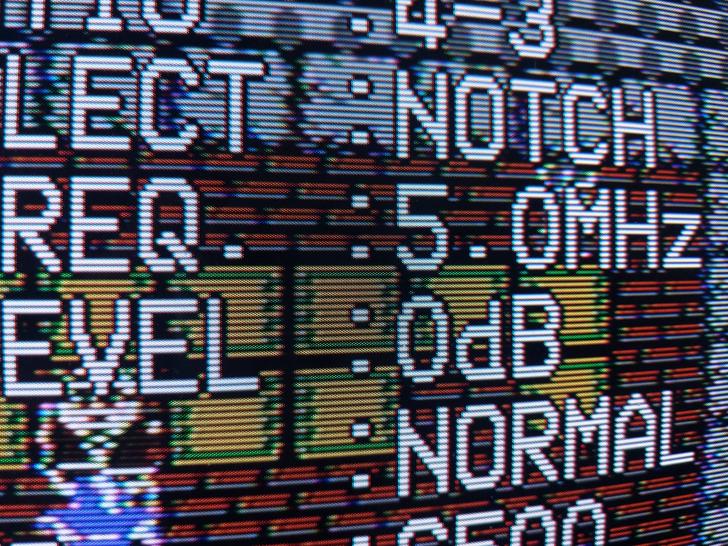 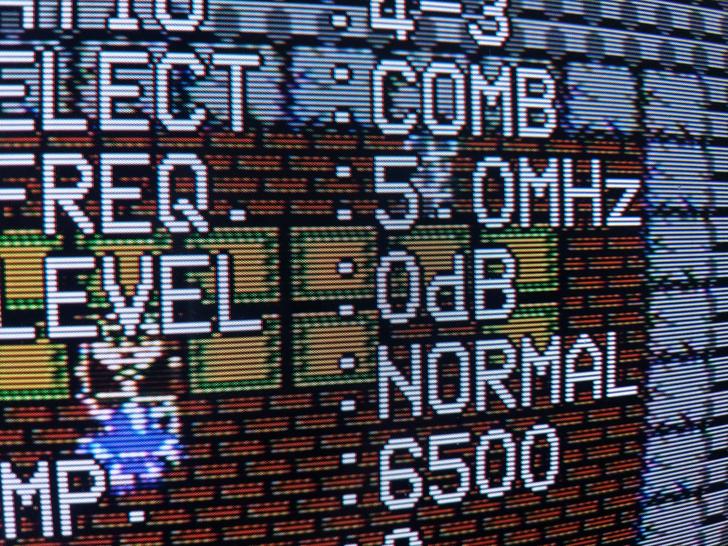 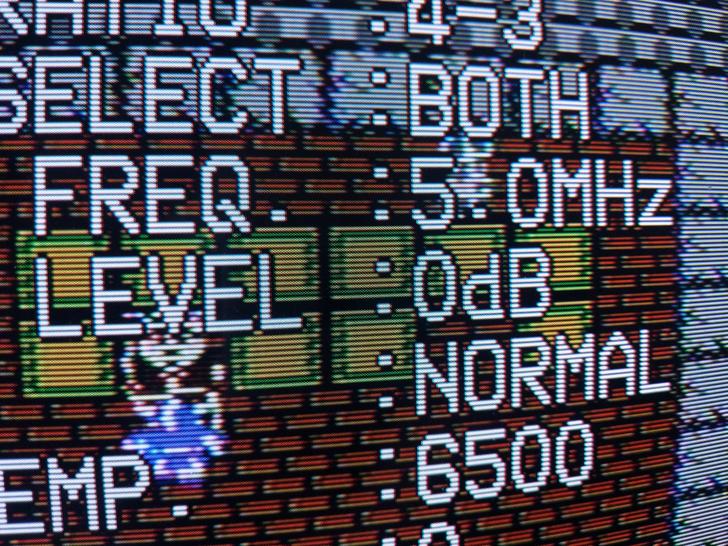 Additionally, I have seen some LCD's and plasmas that do a relatively good job (not perfect - they often still will interpret 240p as 480i and apply comb filtering - but good in that they don't do any additional processing beyond scaling and have a good analogue -> digital conversion and scaler inside).

My parents have a 50" Panasonic plasma from around 2008 which does shockingly well; I played the entire Legend of Zelda on it over a weekend when I was visiting and never noticed any major issues. It only messes up badly with 60hz flashes, where you'll clearly see the interlacing pattern, and of course it has the comb filter cross-talk. With S-video systems it looks absolutely great in most circumstances. I also played some original Playstation games via S-Video (using a later PSX with the better video encoder) and it looked just about flawless, even with my eyes under a foot from the panel, due to the lack of a comb filter in S-Video and the already rather good handling of analogue signals that the set posesses. My earliest playstation (SCPH-1001, November 1995) was a bit blurrier in S-Video but also looked quite good. It's just a shame that the '2C02 doesn't expose a separate chroma signal (which has been said probably over 9,000 times now), but when the image isn't scrolling NES/FC games still look very sharp for the signal type they're using.

But some other TV's I've seen like to try to blur the edges of objects when the screen scrolls or a sprite moves. The result looks almost like hq4x or something, but it only happens to things that are moving on the screen.This was with a friend's OLED when I showed him Kirby's Adventure (on my Wii through virtual console, via my Wii with component cables, even). This happened in both 480p and 240p modes (Wii VC NES games usually run in 240p unless the Wii is configured to use 480p in system setttings). I don't think this friend is dumb enough to leave motion interpolation on (he owns a colorimeter and calibrates to D65, so he at least cares about picture quality), but basically we have no idea what kind of "cleaning up" modern TV's are doing and it can vary wildly between sets.

I also noticed substantial noise I never see in component video on any of my sets, leading me to suspect little attention was paid to the quality of the analogue video inputs and they were just thrown on as an afterthought (which they likely were).
Top