I got into possesion of this interesting keyboard-like console called SUBOR SB97. 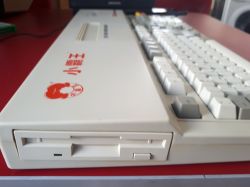 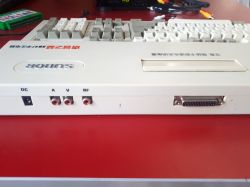 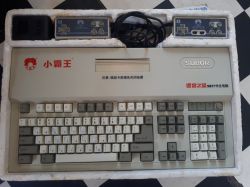 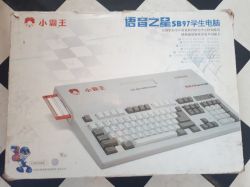 But it's not like other cheap keyboard-famiclones (GLK-2004). It's the first famiclone that doesn't make you want to throw the keyboard out of window after pressing few keys. But primarily the most interesting fact is presence of standard 3.5" floppy disk (!) and printer port, so I thought of making extensive reverse-engineer.
Also it was kind-of broken (internal cartridge showed no graphics like you would remove SRAM chip from CHR-RAM game) - as it turned out later, the resistor that pulled-up to VCC the line used to detect presence of external cartridge has too much resistance causing too big voltage drop.

This is probably either first-release or low quantity product:
* there are few patches applied to the PCB (cut traces + wires) - I marked them on schematics to see what they changed, they even cutted one track in two places 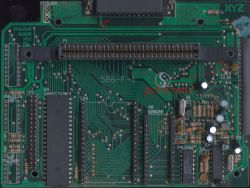 --
Reverse engineering
The entire console consists of primary PCB (with cartridge slots) and secondary one (with DC A/V jacks), connected by a 22 pin ribbon cable (whose pinouts is different than any one I ever saw before). They even put two 7805's (one for powering floppy and the other for rest of chips). Both red & yellow wires of floppy are powered from 5V (maybe early floppy drives needed +12/+5V, but this one seems to be normal HD floppy, reads standard FAT12 1.44MB disks). Most hard part was to desolder those goldpins cause they're extremely fited to the holes, but it was succes. 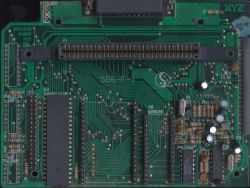 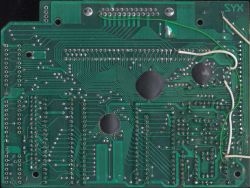 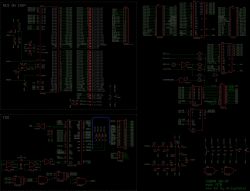 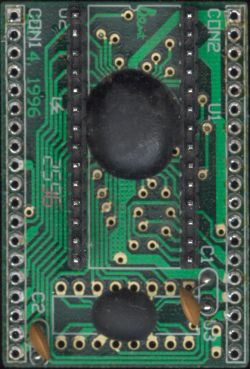 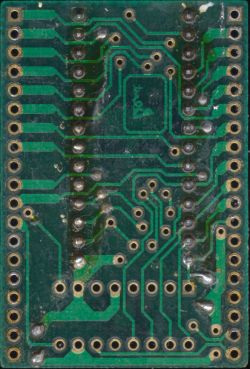 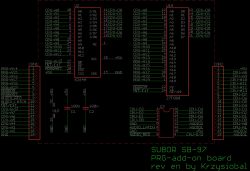 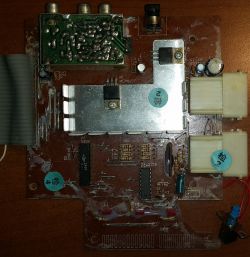 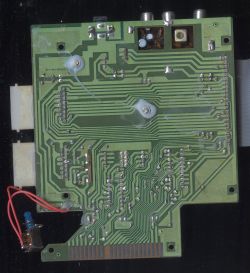 Overal design:
There are tons of chips:
*NES-on-chip blob (with exact same pinout as UM6561)

*SRAM which acts as CHR-RAM for internal cartridge

*GM82C765B which is floppy controler

Audio coming from this chip is used at least in the calculator-program which talks all digits and operations.

*SB02 for driving columns of keyboard-matrix

*74158 for multiplexing lines of keboard rows

This is a small glob pcb whose purpose is to play a one second welcome text (?) after console is started, no matter if the external cartridge is present or not. 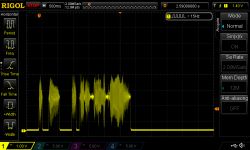 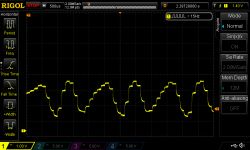 - Rising edge on pin 3 cause restart of currently played sample.
- When pin 5 is held low, voice become muted (but after releasing it, it starts playing where it stopped)

Dumping the PRG-ROM.
I created a small adapter which converts the add-on board to standard 27801 pinout and thus allow read using EPROM programmer.

Firstly I got very incosistent reads. Later it turned out that the blob chip placed with the ROM is causing bus-conflicts. I disabled it.

--
Analyzing the mapper chip
It's hard to analyze chip built-in console. I did it by creating a special cartridge UNROM-like cartridge which controls pin 31 (used for detection of external cartridge).


What is left to do:
* PPU banking & mirroring: internal CHR-RAM's A0-A11 are wired to PPU. A12 is wired to CIRAM-A10 (which is controlled by mapper), but mapper blob has access to PPU_A13..A10 (so theoreticaly it can do V/H/0/1 mirroring and use 4kB/8kB ROM bank granurality).
Which I found extremely weird is that on powerup CIRAM-A10 follows PPU-A10 and there does not seem to be any register which changes that. However, when I looked at the behaviour of CIRAM-A10 for internal cartridge, it is strange. Looks like not CPU controls mirrorig/banking of CHR-RAM, but rather it is done by PPU-itself (like in MMC2, by looking at specific tiles) or it changes automatically after certain rises of PPU-A10/A11/A12/A13. I need to find that out.


I attach the ROM + modified FCEUx that supports it.

The built-in semi operating system called SB DOS Version 1.0 for managing flopppy drive has very limited set of commands. It can't even enter folders, but is able to execute COM/EXE (they need to be in subor format, whatever that means).
Note that in attached ROM, DOS (which is the center choice) cannot be run - probably communication with floppy-controler chip need to be implemented in emulator for that to work, but on real hardware the floppy disk can ever be disconnected and it still lets DOS to be executed.

Eh, that ROM has already been dumped as Subor V, Mapper 518, which displays the graphics without any glitches in NintendulatorNRS. Of course, the audio, floppy disk controller and printer functions still need to be described. Furthermore, the $5200 register on the wiki does not incorporate the more elaborate PRG banking, while your description is missing the CHR banking bit.

Yes, the DOS will only be displayed if the (NEC µPD765-compatible) floppy disk controller raises an IRQ when it is reset.
Top

Mapper does not have PPU-/RD nor PPU-/WR routed so it can't distinguish between PPU read/writes. So either it somehow can distinguish when PPU is rendering/not or there is more logic underneath.
Top

That is correct, because clearly, the introduction screen with the falling Subor logo must have that CHR-A12 follow mode off to not look garbled.

But I got floppy disk reading working in NintendulatorNRS! I had no actual disk image with files suitable for the SB97, so I just used a PC game disk for testing: Do you have Subor format files to try?
Top

My mistake, my test cartridge had solder jumper set to V mode (CIRAM-A10 permanently soldered to ppu-a10), that's why no mirroring changes were observed

Unfortunately not, I got it without any floppies. But take look at it, it is yet different Subor version (probably also with different DOS with more commands):
https://webcache.googleusercontent.com/ ... clnk&gl=pl
Top

Television commercial for this particular model. Not terribly enlightening, but amusing nonetheless.

Twenty minute video of this model in action. Apparently, the speech chip is not just used in the calculator, but the text editor can read the characters of a text as well. Also, the middle icon changes from DOS to something else if a cartridge is inserted! I presume that the PRG modes that are listed as mapping "open bus" actually map to the cartridge slot.
Top

I wonder if the EXE/COM are just pure 6502 asm files that are executed by CPU or rather they contain calls to the SB DOS routines and are interpreted.

Each packet consist also of some amount of read/writes to the chip (read is used to get the READY state of chip?)

Here is how look those pulses with comparision of how they look at the bases of transistors (they're in fact all 5V amplitude, just my scope makes them look like they not fall to 0V for the shorter ones) 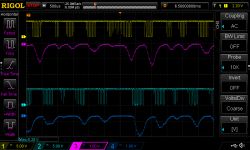 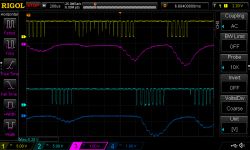 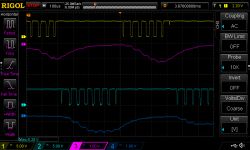 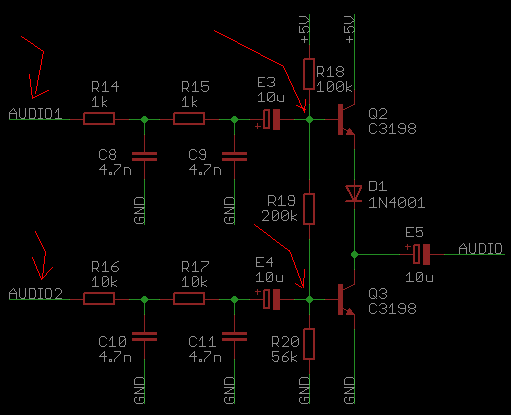 A few years ago we had someone show up to talk about writing programs for one of these famiclones with a floppy disk drive... had a blog about it too. Can't remember his username, unfortunately, nor any other identifying details that would let me search for it :/

But what he was demonstrating was native code that used jumps to the bios at a fixed address as a syscall interface, to replace the x86 DOS "interrupt" syscalls.
Top

krzysiobal wrote:I don't know chinese (or japanese) but "2" sounds like an "ahh".

This design looks VERY similar to the Dr. PC Jr. Famiclone, as that had a floppy disk, AT keyboard port, "DOS" clone, and a speech chip on board:

The heck you say. That reminds me of an unanswered request I had made about a month ago...

The design and focus are different - The Bung Dr. PC Jr. uses the PS/2 keyboard interface, while the SB97 uses a proprietary (Subor) keyboard interface, and no mouse. (Later Subor models did support a mouse, again with a proprietary interface.) The Dr. PC Jr. had better capabilities for running pirated games, however; its custom mappers basically replicate Bung's late-1980s (Super) Game Doctor RAM cartridges, so that mapper hacks made for them can be reused, requiring only the addition of the custom file header. Clearly, Subor was serious about making an educational computer, while Bung repackaged their game piracy devices as a make-pretend educational computer.

Edit: The pinout of the audio chip resembles that of the TSP50C10/11 speech chip (N package), at least in the data pins. If it is that chip, then the design manual has a mere 400 pages.
Top

NewRisingSun wrote:The heck you say. That reminds me of an unanswered request I had made about a month ago...

Was it a month ago? Feels like I had read it only 1 week ago. I'll look for the other PCJr files, but I doubt that I have them backed up anywhere. I lost all my PC contents pre-2004 due to a hard drive crash at that time.
http://www.chrismcovell.com
Top

NewRisingSun wrote: Edit: The pinout of the audio chip resembles that of the TSP50C10/11 speech chip (N package), at least in the data pins. If it is that chip, then the design manual has a mere 400 pages.

It might be true, this chip also uses D7 for signalling BUSY/IDLE state

Slightly unrelated but it just occured me that the add-on PCBs (specifically, the one that has two story) has the same Bert (?) signature as a series of multicarts found in Mainland China in the early 90s, like that one.
Top
Post Reply
14 posts • Page 1 of 1