While checking the original releases of the infamous Super Bros. hacks, I remembered that my two copies of the Jackie Chan one (Super Bros. 10) had different PCBs. The small one revealed to be M196, like most of those hacks. However the large one, which at first was a candidate for an original print with an obscure mapper, showed to be just standard MMC3.

Was this meant to be a 2-in-1 MMC3 multicart with two 2x128kB games? Clues on the reason for the 4kB UVEPROM? The small PCB:
very similar (if not identical) to Super Mario Bros 16 which has PRG/CHR address lines mixed and MMC3.A0=CPU.A3

I think 2C and 2D are PRG/CHR of regular Jackie Chan, 27512 adds mario graphics to it and 4k EPROM is some patch for PRG that allows the game with altered MMC3 registers (MMC3.A0=CPU.A3) to work on regular connection.
Similar patch in additional EPROM like in Don Doko Don 2.
Top

You mean Don Doko Don, not Don Doko Don 2. (That thread is the most headache-inducing piece of confusing chatter I have seen in a long time. First four cartridges, then two additional variations of one of the four, one of which gets its CHR data replaced with that of yet another game version.)

I can definitely say that there is no jump or vector into the $6000-$7FFF area. It dumps as normal TLROM.

Edit: Trying to dump the $6000-$7FFF area results in 6000 being 00 and the rest of the range having $ff on the first read, and on any of the subsequent reads, the whole range containing solely $ff, which I assume is open bus behavior.
Top


I can definitely say that there is no jump or vector into the $6000-$7FFF area. It dumps as normal TLROM.

I think the "patch" is done on the fly, without jumping, that is - when accessing to some range of ROM address, the additional logic enables the "patched ROM" instead of the original one, this probably occurs for PRG and CHR.

For example, looking at the ROM offsett 1FFE0 shows that the signature ("JACKIE CHAN") is in different offsets. So those 2 versions of Jackie Chan are probably complete different builds and Super Bros 10 is a patched "Jakcie Chan" of yet another built. 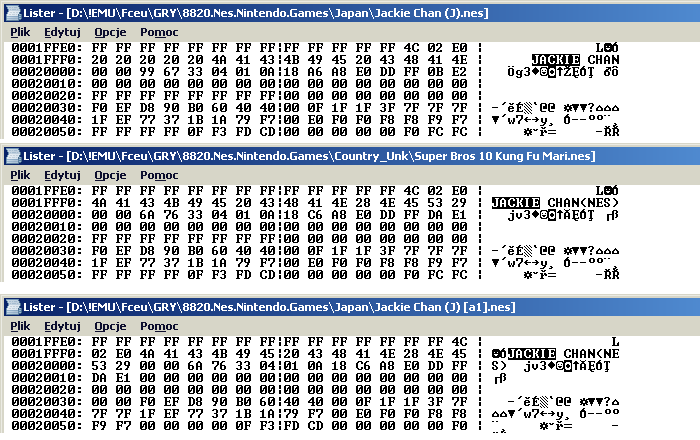 No idea why the patch and whole logic instead of just putting EPROMs with altered PRG/CHR.
Top

Ok I think I got it.

PRG:
Assuming they wanted to patch the above regions marked as (?), they needed to cover those 2 regions:

Which is perfectly done using the following circuit:

CHR:
By dividing the whole CHR into eight 16k regions and counting how many bytes in that regions differ shows that there are only four regions that need to be patched.

Which is perfectly done using the following circuit:

The missing 7402, if soldered (without 74138/7432/7400) makes the PCB usable as regular MMC3 with two 64K standard CHR-EPROMS. There must be some jumpers underneath CHR-ROM however that disconnects MMC3-CHR-A16 from its pin1.

There is no way to read-back unmodified parts of 2C and 2D mask roms without cutting some traces or desoldering them. 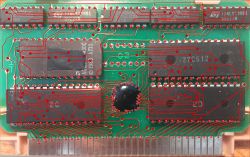 So does this imply that the "patched" MMC3 cartridge is the original version of that port Mario hack, and the mapper 196 version is not the original one? Or does it only say that somebody might have had a surplus of Jackie Chan mask ROMs and might have wanted to re-use them for a better-selling Mario hack?
Top

I think this is rather independent hack, just like many different SMB2J hacks floating around.

If this cartridge was from 88 or earlier, I would say that huge EPROMs were expensive and making all that "patching" using smaller ROMs was more economical to save money than using four 27512 (or two 27010) chips.

But basing on the manufacturing dates of chips (1992) plus all the 74 logic which costs and time needed to design PCB makes me think that this is rather some kind of copy-protection - author assumed that somebody who would like to duplicate this cartridge will need not only to read-back eproms, but also analyze the circuitry. I doubt this PCB can be used for any other game.
Top
Post Reply
7 posts • Page 1 of 1