Hi,
i recently bought a snes card on aliexpress:
https://fr.aliexpress.com/item/33042603604.html
I was not aware of the 3v / 5v problem i experienced while reading this forum.
please, can you tell me if this card involves risks for the snes?
here is a photo of the electronic card:

thank you very much
Top

Could you provide a better (higher resolution) picture of the board?

Without that picture, I tentatively think this card is using 3V flash and CPLD and expects to be run in a 3V SNES clone. This might suddenly break at some point in the future but I don't think it'd be a problem for the SNES.
Top

thank you for your reply,
unfortunately I don't have the cartridge yet and I don't have the tool to open it, it's the best photo I can provide
just to clarify I was referring to this subject:
http://nerdlypleasures.blogspot.com/201 ... r.html?m=1

the discussions seem very controversial: https://www.reddit.com/r/retrogaming/co ... mage_your/
I do not want to relaunch the subject but it is not easy for a person who is not an expert in electronics to know what the real risk is

what is the reel pb? is it possible to identify a "dangerous" une card (if it exist)

To do my best to ELI5 this, there are three problems with using 3V parts on a 5V system:

- Every electronic component from the last 30 years has a special part in it that protects it against static electricity. These "overvoltage protection diodes" work like like a weir to cause too-high or too-low voltage on various connections to be connected to the part's own power supplies. They're not rated for continuous use - it's for protection, not for "translation" - and using them continuously will cause the part around them to get too hot and age faster or fail.

- Every older system has a "bus" by which everything communicates. One part or another will "drive" a bus by using specially designed parts inside to put the correct voltage on the bus. These drivers are not rated for driving into that metaphorical weir, and a 3V part here will generate drastically more heat in the driver - once again, causing aging and failure.

- Every electronic component has a range of voltages over which is functions correctly. If too high of a supply voltage is used, the component can end up trying to be simultaneously "on" and "off". Once again, that causes it to get hot (often very hot, very quickly).

BennVenn's comments seem to be that, of these bad options, #3 is the least problematic, because a lot of vendors just don't bother characterizing or testing their parts for/at higher voltages. But I don't see any reason to trust that just because the vendor didn't test something that it'd be safe. I've also definitely tested that 7805s protect against overvoltage on their output, and I wouldn't trust that other voltage regulators won't. (edit: Furthermore, with a voltage regulator without the overvoltage protection on its output, you're now powering the components through their overvoltage protection diodes and the bus drivers on the other components, bypassing the voltage regulator altogether. Those drivers are definitely not designed to power external parts)

Even in the absence of every other constraint here, different components treat different voltages as "on" and "off", and sometimes a 3V part saying "on" doesn't reliably look like "on" to a 5V part.
Last edited by lidnariq on Sun Dec 20, 2020 12:56 pm, edited 1 time in total.
Reason: mention extra problem with BennVenn's arguments
Top

Thanks for the explanation
what you advised me to do with this card? Should I throw it in the trash after receiving it or can I use it?
Top

It'll be cheaper to buy an inverse torx driver than to throw away the cart :p
Top

it's a specific Nintendo screwdriver I think?
It didn't seem like a classic inverse torx.

but I will put it in the trash directly after receiving it, it was a bad buy I think. these readings put me in doubt. and I am not qualified enough to know if it is dangerous or not for my console that I care about. No one seems to agree on the subject and I could never ever be sure.
it may be a mistake but these readings seem very worrying

thank you for your reply
Top

Measuring it's roughly 4.1mm, so it's probably a standard E4 inverse torx driver? You can also search for "game bit" - at least, in the Anglophone world.
Top

Hi!
I found it in my mailbox.
I still can't open but the case is transparent and I was able to identify the chips

sorry for the image quality

all chips use 3v, so I guess the 5V/3V problem is reel with this cart?
Top

If someone is interested, here is the PCB without components (alt version, the FRAM is on the back). 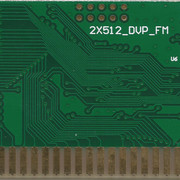 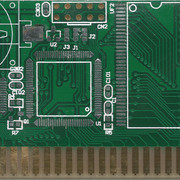 thanks Zonomi
according to Altera Max II EPM240T100C5N reference, it seems to accept 2.375 V to 3.6 V
I am not sufficiently qualified in the matter to say if this card represents a danger for the console
from what i read there should be 5v/3v converters
I'm not sure if this card has converters

You can see all the wires on back side directly connected to the ROMs, so the CPLD isn't doing any translation unfortunately.

Furthermore, I'm pretty confident that the part labeled "U4" is just a 3V regulator without anything funky. I wouldn't use that cart in a SNES.
Top

Thank you very much, it's very clear now
It will go straight to the trash
I never imagined that a cartridge could destroy the console.
When I see the number of buyers of this kind of product I am very sad because nobody knows.
Top

Just to understand everything: why the U4 regulator is not enough is this case?
Top

U4 is actually the source of the problem, not a fix.

As I said, the problem is that the outputs on the SNES CPU itself aren't designed to drive into 3V.

Think of it kind of like this: https://www.youtube.com/watch?v=NjbbW37qzak . It's not a problem that a litte water flows - the normal dam is fine - but when too much water (or electricity) flows, that's what's the problem.
Top
Post Reply
32 posts