I mistakenly reversed connections between D0 and D2 in AY8912, so it was playin in the correct tempo but rather quite different data

Now its fine, however the sound still is quite out of the tune. And all can be closed in standard famicom shell

I have made my own board for this as well.

Untested so far cause I didn't get any FME-7/5A games yet.

I wish there was another way that doesn't require CPLD knowledge to use donors for that one. Lol, so thin tracks - make them tighter before ething.

Why people have so much resistance against CPLD? They give much more control than microcontrollers - you can set up with respect to single clock cycle what is at the output. Maybe the language (VHDL) seems strange at first glance, but it is really not as bad. There are a lot of ways to express the same thing, but you can stay with one of them you are most familiar with. Bad thing is that the web has a lot of outdated info, lots of people's advices are wrong, so you have to learn all by yourself, but then you gain so much power that you dont have to be sticked any more to 74xx chips, rare ASIC chips like those mappers (FME7) or PALs - you can code everything by yourself.

It is quite rare to find 5 V tolerant CPLD/FPGA nowadays, but 74LVC245 buffer costs 0.1$/piece. Is is is smd (so20), so no drils need to be done. Every input is at opposite side to the oputput so really almost zero effort in routing tracks. All you need is 3.3V low dropout regulator (LM1117-3.3 works well). You can but cheap CPLD starting from 1$.
And you can implement FME-7/VRC6/VRC4/VRC2 or almost any mapper inside (except MMC5 which need external RAM and most of cheap CPLDs don't have extra logic for ram inside).

BTW. I saw one guy tried to encode MMC1 in PAL. He used 4 PALs. Maybe good for learning how to create extra-optimised logic, but from economic point - nonsense.
I have succesfully impkemented MMC1+MMC3+some other mappers AT ONCE in this 1$ CPLD.
Top

Both Quartus (for Altera) and ISE Webpack (Xilinx) are free to download and they can generate output files without any restrictions. As far as I remember you need to get licence file from the website, but is is free and fully automatic process which takes less than 1 minute.
Top

krzysiobal wrote:Both Quartus (for Altera) and ISE Webpack (Xilinx) are free to download and they can generate output files without any restrictions.


As far as I remember you need to get licence file from the website, but is is free and fully automatic process which takes less than 1 minute.

Perhaps this is PowerPak-specific, but Xilinx likes to drop its older FPGAs from the currently available versions of the program and key generator.
Pin Eight | Twitter | GitHub | Patreon
Top

This doesn't even go into the malware they call protections. XD

This is why you have a specific hard drive or even better, machine, for this. This way you don't get burned by the likes of Intuit's TurboTax back in the day. I wouldn't put it past them to try to mess with your EFI firmware.
Idealogical
From: I have an idea. It seems logical. Thus everyone must agree.

Yeah it can be annoying when designing for decrepit device that's no longer supported and may have required a non-free license when it was supported. Designing for discontinued devices is always going to require you to jump through extra hoops, that's not limited to programmable logic toolchains.

Xilinx, Lattice, and Altera all offer free licenses that are easy to manage. High end premium devices may still require a paid license, but there's no realistic reason to put that scale of a device in a cartridge.
If you're gonna play the Game Boy, you gotta learn to play it right. -Kenny Rogers
Top

AFAIK, the iCE40 is the only FPGA that can be fully reverse engineerable at this point. Encryption and such have been tampered with, documentation all public.

krzysiobal wrote:Lol, so thin tracks - make them tighter before ething.

I see no reason to laugh at this since your traces are the same width. My power traces are thick enough and I've made many boards this way. All of them work flawless without any problems.

Anyway, as for CPLD programming. I lack knowledge of VHDL nor do I want to buy any licenses or get any licenses for a software, neither do I plan to get new equipment for just 1-2 projects.

If I were to work alot with VHDL I can understand the need of it but for now, nah.
Top

I've just made a special plug-thru extension-cartridge that is based on AY chip which adds additional audio channels.

It has place to solder 28 or 40 pin AY chip (the bigger one is a lot cheaper on aliexpress).

You can plug:
* any flash-cart that does not implements additional channels,
* FME-7 or Sunsoft-5A repro game,
* your own home-made cartridge using any mapper (as long as it follows the mapper 69 audio registers)
and then you get extra audio channels.

There is even a jumper that can completely disable the audio generated by CPU.

Believe or not but routing the traces was quite a challenge. Now with Game Genie and 60->72 and 72->60 pin adapters it still works 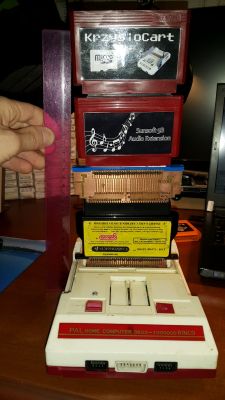 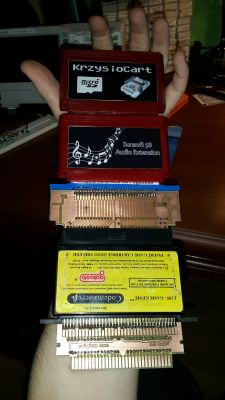 Extremely cool, I love your krzy stack of adapters, with a Game Genie in there for good measure, it is awesome.

Why do you suppose it is so hard to find an adapter to plug an NES cart into a Famicom? I think yours might be the first one I have ever seen a picture of.
Top

Where I live a NES to Famicom adapter is sort of difficult to come by.
When you find one they're usually around 100 bucks!
Luckly, I could get one by R$48.00 shipped.
Top

I think I do remember seeing that now come to think of it. At the time, I had absolutely no idea where to find a 2.50mm pitch edge connector so that was a big obstacle to build one myself. I ended up getting a Game Genie with broken plastic thing and modified it using a scrap famicom cart (which ended up being slightly cheaper): This adapter ALWAYS has a Game Genie in the mix, it would be nice not to have that in some situations, like if I am looking at things with a scope, etc. This has the ability to convert all 4 combos but mechanically it requires a bunch more Game Genies stacked up in front of it to fit into a front loader. The 2 female connectors are positioned such that it is not possible to insert 2 carts at the same time. All carts and Game Genie face forwards in all systems. Interesting challenge was the audio. When there is an NES cart attached, this adapter needs to close the audio pins together on the male FC connector, but when there is a FC cart attached, the audio should be sent through the cart. I did this, in an admittedly questionable way, by running GND to only 1 of the NES cart's GND pins, then using the other GND pin to a tiny little 5V relay. My assumption being that all carts connect these GNDs together... Since it is a DPDT relay, I also connected this pin directly back to GND again once closed, effectively creating a latch and preventing current to the coil running through the cart. It is an interesting device but honestly I would rather use a direct adapter in any case where I did not plan on using Game Genie codes.
Top
Post Reply
136 posts