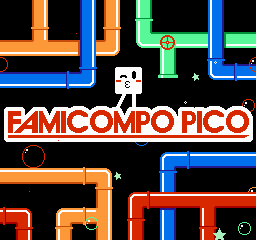 A cartridge album of entries from Famicompo Pico 2014 has just been released. I did the code part, and the ROM and source code are available on the linked page. There's also an NSF/NSFe there too, if anybody wants those.
Top

I have no idea how he got those dubstep sounds to work on an NES.
nesdoug.com -- blog/tutorial on programming for the NES
Top

Adrenaline Rush has a custom 224hz playback rate, instead of the 60hz all the other tracks are using. (This is also why it doesn't appear on the ROM version*)


* Unless you're very sneaky.
Top

* Unless you're very sneaky.

I think it has something to do with

I'm guessing, while a song is playing, you press...

but I don't have an emulator that can play the .nes file, so I can't be sure.
nesdoug.com -- blog/tutorial on programming for the NES
Top


Do I win a cookie?
nesdoug.com -- blog/tutorial on programming for the NES
Top

1) Why is this only being release now, almost a year after the comp?

2) Why only such a few tracks? Is that all the rom could hold?

3) What about the expansion chip songs? Can those songs which used the extra chips be put on a cart?

Erockbrox wrote:2) Why only such a few tracks? Is that all the rom could hold?

Presumably so. They have to meet three criteria:

1. Wasn't my decision, but I presume kfaraday was waiting until the 2015 competition started for the release. I actually made this ROM several months ago. As for why I didn't make the ROM a year ago right after the compo: it was a volunteer effort, just like all the music on it. (That's also why the ROM is available for free, and open source.)

2. I didn't select the tracks either. I think it's more to do with picking the top entries? The mapper can hold up to 1MB, which we did for the 2A03 Puritans album, but this one is a 512k ROM. One big advantage of a 512k ROM is that an Everdrive can run it (with a suitable mapper). I can't answer about the economy of using a smaller chip, as I'm not involved with that, and I don't get a cut. Money raised from the cartridge goes to the support of Famicompo.

3. Why would you expect an NES cartridge release to have expansion sound?

4. As tepples answered, yes. It's on right now.
Top

New 1 MiB 'PROMs are noticeably more expensive (just slightly less than 2× the price) and are somewhat harder to work with (TSOP, not DIP; very expensive to socket) than 512 KiB 'PROMs.
Top

Socketing isn't really an issue, since they're flashable on the board. I don't think assembly is significantly different for 512k or 1MB configurations; INL's board is all surface mount anyway, and he did put an alternative set of pads on the board for the 1MB chip. There was some extra design/support overhead 2 years ago to get it on the board, I think, but for this particular project, I think the only really relevant factor is the cost.

Honestly, though, I don't think that had much to do with the ROM size choice for this cart. If you inspect the ROM, you'll see that we really weren't maximizing use of the 512k anyway. I think this is just the top ranked 10 tracks that were eligible (i.e. 2A03 only sound).
Top

I didn't even know fami comp was happening in nov this year. I was expecting it for dec. Also why not just create songs all year long and then just submit them in the event rather than only making them in the month time period that they give you.

i have thanksgiving off for school so i will try and make a song.

Also if that NES cart with the nes compo songs on it had like 30 or 40 of the best tracks then i would buy it, but i dont want to buy it for only like 10 songs.
Top

Erockbrox wrote:I didn't even know fami comp was happening in nov this year. I was expecting it for dec. Also why not just create songs all year long and then just submit them in the event rather than only making them in the month time period that they give you.

I can't speak much about Famicompo's timing. It's been different every year, usually somewhere around October, I guess? It's varied a lot over the years.

You can compose any time you want, the only requirement is that they are new for the compo (i.e. previously unreleased). The month is just how long the submission window is open.


Erockbrox wrote:Also if that NES cart with the nes compo songs on it had like 30 or 40 of the best tracks then i would buy it, but i dont want to buy it for only like 10 songs.

Hey, don't buy it if you don't like the price. I don't have any stake in the cartridge sales, but the ROM itself is free.

"30 or 40 of the best tracks" is really most of the tracks. I think there were 53 2A03-only entries. The 10 selected from the album appear to be the 10 top rated. So, like, this ROM is the top ~20% of entries, and you're saying you'd rather it be the top ~75% of entries. If you wanted an idea of why it's 10 tracks, I think that's basically it. Getting a track on the cartridge is supposed to be a prize for the winner's circle, not merely for participation.
Top
Post Reply
13 posts • Page 1 of 1