Decided to join this forum since I've been learning 6502 the passed few weeks (hacking mario bros 3 and zelda 1 has been quite fun).

I have come here to ask a question that has been bothering me for a very long time... Do you think it's possible to make a reproduction of this game? It's probably TOUGH or impossible, and I'll try to explain despite me not being adept at reproducing.

So, I suppose I may understand how the development of a repro works, I think. Find a matching mapper that supports a high enough CHR/PRG rom, etc. That's all I know at least.

According to bootgod, Digital Devil Monogatari has mapper 76, which is unique to that game only. Mapper 76 supports a maximum CHR or 128kb, and a maximum PRG of 128kb.

The hard part I think though, is that the translation actually expands the rom size. Specifically its PRG gets doubled.

So, now the problem I see myself is that the only suitable donor cart we could use is no longer suitable, as mapper 76's maximum supported PRG is 128kb.

Now we're entering territory that goes beyond the scope of what I know heh. My question to you, was if you'd have any idea how to make this work?

I've tested the translated rom on Krikks'z Everdrive-N8 and it works, but I'm looking to specifically have a reproduction. It feels a lot better to boot into the game instead of booting into an OS where I can browse folders to boot my game. Heck, I'd even settle for Everdrive having an option to boot straight to my game, but Krikkz has refused to add that option unfortunately =|

MMC3 says it's got a PRG capacity of 512kb and a CHR capacity of 256, which is perfect, but I think I've said too much now. I don't know enough to know whether MMC3 could actually be used for this game or not.

Also, of course, I have no experience whatsoever doing this kind of thing. I've had a few repro sellers attempt it for me but they failed, except for one person who showed me just a tiny bit of a progress and has never messaged me back. I think he's been busy so I just gave up on him. For whomever could achieve this, I would love to learn the challenge and would also gladly throw my green paper at you.

My apologies for writing so much. This is something I've wanted for a very long time and I figured I'd drop by here to get definitive answers on whether its possible or not. Thanks for reading.
Top

However, DDS:MT (m76) only supports 4x2 CHR banking, which is different from almost all other mappers.

You should be able to rewire an MMC3 in the same way as the N108 is rewired on m76, to get an end result that supports 512 KiB each PRG and CHR.


This could actually work indeed. It already runs on an MMC3 board! It just needs software modification to clear up the CHR corruption. I have a nice label to share with OP if he manages this.

I attempted to make it look like a VHS tape from the 90's haha. Especially like the Logo. 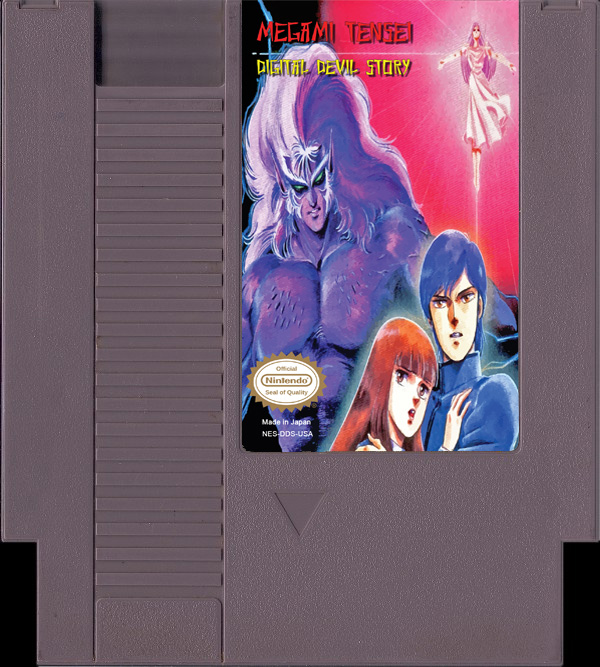 Though, I would not be able to do this myself. I'm wondering if anyone else could, since I am not adept at this at all ;_;
Top

At some point in the future, I might see about mapper hacking the translation. Right now I'm just not feeling up to it, so no promises.

The rewiring instructions to inflate the MMC3 in the same way as in Mapper 76 are straight-forward, if full of a bunch of steps:

I have been doing some digging on this topic and trying to get this to work in Nestopia. Would increasing some some of the PRG and CHR capacity work? I know this isn't a ticket forum for nestopia and moreso in hardware, but it seems like it might be an easier fix and i dont want to clog up the forums with a thread for this.

Any input would be appreciated.

According to the patch notes:

Wow, just fixed it. Nevermind. That was easy.

A mapper 76 game with more than 128 KiB PRG and CHR is not supported by the original hardware and thus should not be supported by emulators.

It's the same argument as why MMC3 shouldn't support 1 MiB PRG.

To address this bit:

To our knowledge this is not a problem with our translation, but rather a limitation with the emulator's mapper system. Megami Tensei's mapper is a unique mapper made solely for this game, but it appears to be basically an MMC3 mod given the many similarities between the two.

So, yes, it is a problem with their translation, and mapper hacking it to target an ordinary MMC3 instead of defining new fictitious hardware would be the correct solution.


The game has been tested on an NES with a Powerpak, so you can play the game on an NES if you want.

An error in being too permissive in one emulator's implementation of a mapper—and that's exactly what the PowerPak is—does not constitute an error in failing to be overly permissive by other emulators.
Top

The fix i was thinking of was more of leave the mapper alone and simply just add a database entry for it based on crc so both games will run and the original will still run accurately.

Looks like that will not work either since the nst.board is coded to not go over that amount. Even when i add the entry the board code has it at 128 and it still cpu jams. It sucks, because this translation is fun to play, but i don't know if it's worth it at the cost of accuracy.

I heard that Megami Tensei II has sound / music menu - is it possible to modify the rom with the game to make this menu right at the beginning of the game (even if it was just the music menu after starting the rom).

I would like to make a cart with music from this game to use the DRAGON NINJA card for this purpose.
Top

I don't know how I missed this thread, but reading through it has certainly bemused me. I'm the hacker and the game plus the translation are a real mess. It's a real horror show and converting that game plus translation to another mapper sounds like a nightmare.

I say who cares the ROM was expanded past its limitation. It was done for a good cause and plus with these new flashcarts, the sky's the limit. Besides converting the game to another mapper would only lead to someone becoming besieged by capitalism and producing a glut of reproductions.
Top
Post Reply
11 posts • Page 1 of 1