They/you guys must've kept this under the radar, or maybe i haven't listened on the right frequencies.

Those GIF samples look very good. Definitely atmospheric. I like that it doesn't look like much else on the NES.

Is tepples coding this too?
Top

The thing i like most is that they there's ambitions changing the player metasprite depending on light and environment. I don't know if these are mockups or actual implementations at this point, but: 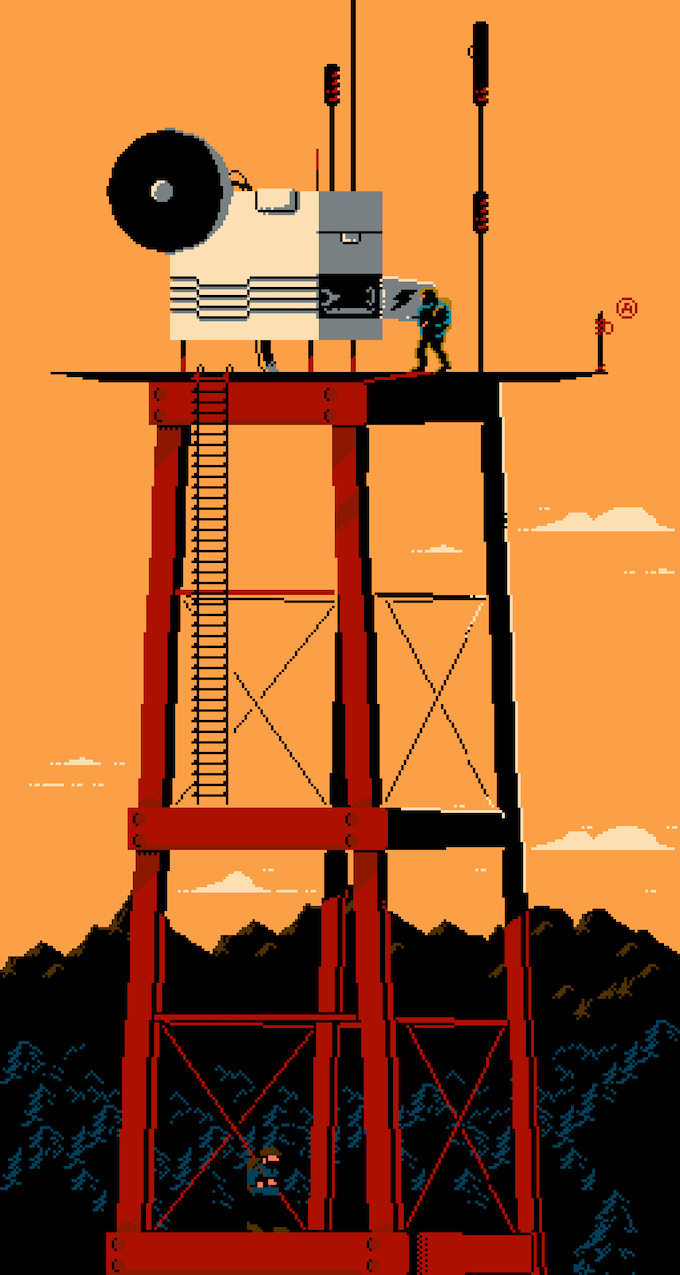 This sort of moody adventure gaming no doubt means a different take on how PPU resources would be allocated.

The KS text also mentions ambitions of scaling sprites based on z depth. I presume this would be prerendered.

I love this art direction. My one and only nitpick is that i think those angled legs of the signal tower could be made to look less jagged while retaining the angle if, they wanted to.
http://www.frankengraphics.com - personal NES blog
Top

FrankenGraphics wrote:The KS text also mentions ambitions of scaling sprites based on z depth. I presume this would be prerendered.

For small depth changes you can pack the sprites closer together to simulate downscaling. You can see an example of this in the Yu Yu Hakusho fighting game for the Mega Drive, where players can jump between the foreground and the background. It looks slightly distorted, but not much more than real-time scaling/rotation at such small sizes.
Top

That would've never occured to me unless you had written it.

One might want to look over how any priority shifting is done with that sort of scheme.
No change: smooth, stable distortion that doesn't draw attention, but also the most severe form.
ping-pong toggling: still smooth; overlapped areas will look like a strobed blend of the two.
round robin order: the occational edge case will look a bit twitchy.
complete randomization: this will probably draw the most attention to the overlap by erratic toggling.

FrankenGraphics wrote:The thing i like most is that they there's ambitions changing the player metasprite depending on light and environment. I don't know if these are mockups or actual implementations at this point

I can't tell what emulator's palette was used, so I'm pretty sure they're still mock-ups.

The second half of the mall chapter in Haunted: Halloween '85, from the same developer, palette-swapped Donny when he was in front of a cinema screen. But the sprite changes here look more involved than "hide everything but the whites of the eyes", needing a separate sprite sheet for this scene. This would be more practical to animate if not all actions (therefore not all sprite sheets) are available while in a backlit zone.

This looks like a mix of clothes palette swapping and an overlay sprite for the muzzle flash. The Haunted games so far have skin color changes for health and clothes for difficulty (or for having been slimed in the second one). The muzzle flash looks doable so long as it doesn't have a whole bunch of enemies on the same scanline. I get the impression that this will be a more atmospheric game, along the lines of Metroid, as opposed to "we're tossing four zombies at you, sprite limit be damned" as in the Haunted games.


FrankenGraphics wrote:The KS text also mentions ambitions of scaling sprites based on z depth. I presume this would be prerendered.

The Haunted games use CHR RAM. If the new one does as well, real-time sprite shrinking is an option.
Pin Eight | Twitter | GitHub | Patreon
Top

ambient+flash uses overdraw: red red2 brown black flesh [white]. But it doesn't look like he uses any more sprites than Megaman does on any line (5).
Top

Was confirmed by Greg from Retrotainment that it's the same team from Haunted Halloween, including tepples. It's in this podcast episode (skip to around 1:21:00 for the interview), I'm looking forward to this game.
https://soundcloud.com/user-463768680/e ... nship-2012
Top

I wish the dad in the promo video put his hat on after leaving the door.
Top

For that sprite character in the original post it seems as if the sprite is using "too" many colors. Is it really two sprites on top of each other to get the extra colors? I've heard that it is a technique that is sometimes used.
Top

This video may be produced from a source other than a NES emulator.

But I didn't see anything impossible. You can easily layer sprites to use more than 3 colors per 8x8 block. Yes.

Look at my Flappy Jack game. The main character uses 2 different palettes for his body, 1 other palette for the plate he's holding, and a 4th palette for pancakes in front of him. I was close to the 8 sprite limit any time a pancake missed and crossed through the plate area.

This looks really good. There are still some tropes I would have appreciated being broken (white male protagonist being one), but that aside, it seems like it'll be interesting enough in terms of gameplay and visuals to pick up.

Just as before, the backgrounds are the graphical strong point (The sprites still feel a bit rigid, and other objects feel a bit awkward, like the distorted proportions of the Game Boy and its lack of visual depth). But, if this game continues to look as promising as progress comes along, I'd be glad to have a copy.

That said, the kickstarter video was cute, but I would have preferred things like footage of gameplay instead, and can't help but think that since the only gameplay-related things released were mockup gifs, crowd sourcing may have been a bit premature.
www.mteegfx.com
Top

I'm friggin' stoked about this game.


M_Tee wrote: can't help but think that since the only gameplay-related things released were mockup gifs, crowd sourcing may have been a bit premature.

(assuming he's still their main programmer) I only think crowdsourcing is premature if it's a team who never completed a game before with no demonstrated competencies. Then one would hope for a demo or real game footage. This is like a dream team. Very high level of confidence.
Top
Post Reply
13 posts • Page 1 of 1