Discussion of development of software for any "obsolete" computer or video game system.
Post Reply
30 posts

So this is pretty much the same idea as the NES mockup ports thread, but for Genesis/Mega Drive. I've found it very interesting in that it is a 16 bit system, but there are still some rather stringent color and palette limitations in place forcing you to really think about your actions to get the most out of it. It really gives you some great insights into what kind of challenges artists had to face. In a nutshell, the system's VDP uses 4 different 16 color palettes which tiles/sprites can be based on, and is based on a 9-bit 512 color palette. For the most part, I have been relying on this palette resource for my edits: 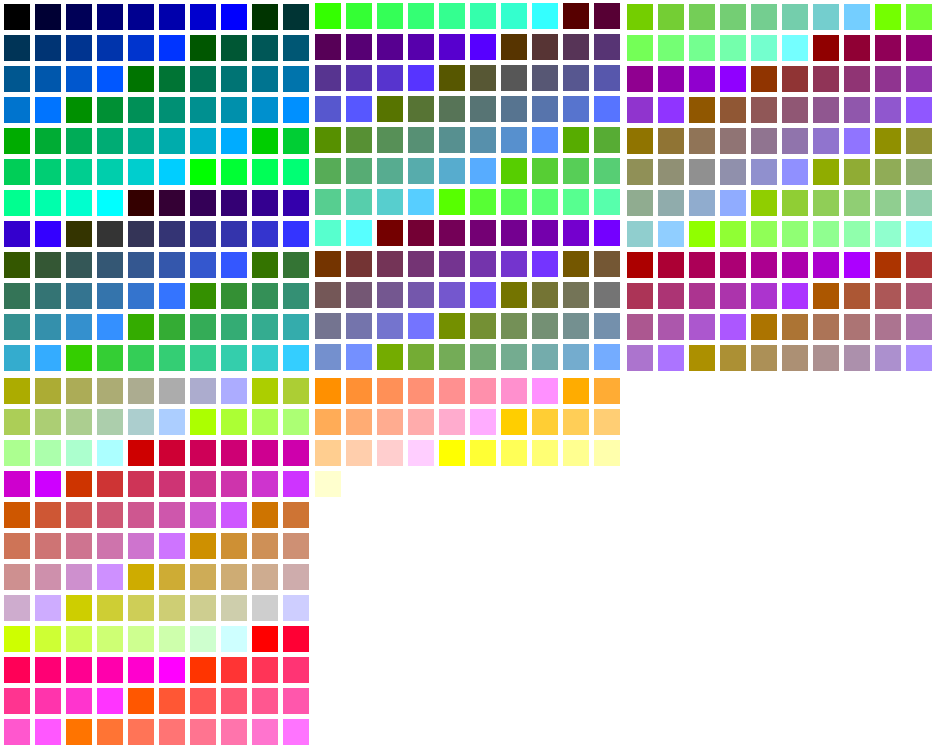 Here's one I made for Street Fighter Alpha 2 a few months ago, based on the SNES port assets (maybe the Genesis could have handled a larger screen estate with wider horizontal resolution and/or less black bars, but I left that as it is).

Basically, the background uses 1 palette, the second palette acts more as a jack of all trades with a grayscale and some primary colors, which here is used both for the foreground lift, UI, and projectiles/effects. Then the character sprites use 1 full palette each. Maybe things could have been optimized differently and both characters could have shared 1 palette somehow, but since fighters are very character-centric visually I thought this would be the better approach.

Here's Super Castlevania IV (did you know that Factor 5 had a proof of concept Genesis port they pitched to Konami?)

Here I made a gradient of shadows, midtones and highlights that could all be partially applicable to the bricks, grass/vines and metal fence. Was very satisfied with how efficient that turned out to be. Simon's palette was recycled for the UI graphics, throwable weapons and candles. The hardest part here was the background layer, which really didn't lend itself well to color quantization. I actually ended up redrawing the sky so that it would work better with less colors.

This game is actually not that intensive in its color use, apart from the sky gradient which I had to dither the hell out of, although I don't think it's that noticeable with the colors I chose. Pretty surprised how well it all turned out.

This one required more work since the graphics had to be scaled down from their higher res arcade counterparts. Maybe the sprites should have been a bit smaller to accomodate for more of them on the screen, given that this is the type of game where you expect to fight hordes of aliens (At least I also made sure to reduce the length of the alien tails so they don't take that many tiles). Level background is 1 16 color palette. Alien sprites are 8 colors. Made sure the player sprite has the pants, hair and skin share more color slots with eachother. I made sure to leave lots of color headroom for other elements not displayed like items, different enemies and a second player sprite.

Out of all the games I've tried "porting", the X series is really the hardest one, which seems surprising at first since it's not a game you'd consider that visually "impressive" at face value, but it makes sense when you really start considering all the logistics. The levels usually have a lot of differently colored elements which is difficult to account for when they transition seamlessly. So I made sure to cover 2 areas of Wheel Gator's stage here so as to not work within a complete vacuum. Most of the level consists of an exterior area with a cityscape background and the green armor shell, and then you have the interior part with blue platforms. I made one palette for the exterior (with some undisplayed colors reserved for the big yellow eye setpiece near the boss entrance), and a second palette for the interiors.

Then as you can see I replaced the player sprite with a custom one made to work better with a lower amount of colors. The original SNES sprite uses 16 colors, but I managed to knock it down to 12, even with keeping the armor upgrade visuals in mind (I gave the skin just a bit more of a yellow tint so that it can double as the gold bands for the armor). Most of the grayscale was quantized into bright blue/cyan, all in all giving it a more saturated look. So that leaves 4 unused colors in the player palette that could be used elsewhere, and combined with any of the non-blue colors that don't change depending on weapons. Just haven't figured out what that could be used for yet.
It's also the same size/occupying the same tiles as the original sprite in case you're wondering, just with different proportions.

The fourth palette would be used for generic objects like enemies, projectiles, explosions, interactable props, etc.

Finally there's the issue with the boss sprites and the colors it needs. I was thinking that colors could be switched out in the fourth palette specifically for the boss encounters, but you shouldn't change things that can still appear in that situation like weapon projectiles and explosions, so it's tricky. For Wheel Gator specifically his sprite actually works with the palette I made for the exterior background assets, but the same probably can't be said for other bosses in the game. You can tell it was made in house by Sega instead of Capcom; otherwise, it'd probably look like this. I have to say though, that Mega Man X sprite really isn't at all faithful to the original.

Why not just change the color per scanline like the SNES game? You can even see that the gradient doesn't scroll with the background layer.
Top

Espozo wrote:Why not just change the color per scanline like the SNES game? You can even see that the gradient doesn't scroll with the background layer.

Does the system efficiently support that though? I don't have coding experience, and to my knowledge the smooth gradient layers seen in some SNES games is due to a hardware-supported HDMA feature (enabled by one of the modes?). I can't think of any existing games on the Genesis that pull a similar trick.
Top

On the one hand:
With no HDMA, any background color change on the Genesis relies on horizontal interrupts, meaning you might miss the window for an artifact-free background color change if a long microcoded instruction like DIVS/DIVU is in progress. In addition, 3 bits per component means fewer color choices to begin with, and there's no color math except for colors 62 and 63, which mean "50/50 blend with black" and "50/50 blend with white" (details).

On the other hand:
A dithered background requires two palette entries, as the actual background can dither back and forth between color 0 and color 1. Only at the transition (maybe every 16 pixels) does the CPU need to trigger an IRQ to write to CRAM.
Pin Eight | Twitter | GitHub | Patreon
Top

There is already a huge thread like this on sega-16.
Top

Might as well throw in a Wheel Gator .vgm cover too for good measure. It's short (less than 30 seconds) and didn't take long to finish.

That Mega Man sprite looks awful, however this VGM arrangement is amazing. I think Mega Man X music is especially well suited for the Mega Drive, as they are poorly suited for the SNES in the 1st place.

How do you take in account the larger screen resolution, 320px instead of the 256px used by the SNES ?
Top

Eh, I don't get the hate for the X sprite. Looks fine to me for the most part. The hand closest to the body needs more work, but that's about my only critique. Seems like a decent attempt at making the later X sprites (MMX4-6) into a 16-bit Genesis/MD version.

Bregalad wrote:How do you take in account the larger screen resolution, 320px instead of the 256px used by the SNES ?

By switching down to 256px mode, which the MD VDP can do.
Pin Eight | Twitter | GitHub | Patreon
Top

Shonumi wrote:Eh, I don't get the hate for the X sprite. Looks fine to me for the most part. The hand closest to the body needs more work, but that's about my only critique. Seems like a decent attempt at making the later X sprites (MMX4-6) into a 16-bit Genesis/MD version.

Everything else looks very interesting. Can't wait to see more.

It's decent but definitely worse than the original. The biggest problem is probably that the head is quite small and the fighting stance perspective is a bit weird compared to the original.
Top

Pokun wrote: It's decent but definitely worse than the original.

Definitely worse in your opinion. To me it looks fine as a replacement, again especially when compared to the PSX/Saturn sprites for the later MMX games. IMO, the head for the original X is actually a bit too large with respect to the lower body. I'm not saying this just to be contrarian or for the sake of debate. I played dozens of Mega Man games circa 2001-2005 (I was/still am a huge MM fan), and I went through MM1-7, MMX1-6, Battle Network 1-3, and MMZ1-4,so maybe it's because I'm used to all the different art styles, but I like lazygecko's art better than the SNES one (except for that hand I mentioned earlier).
Top

That X sprite isn't working for me either. Mega Man has a somewhat clunky design with those huge legs and all, so the exaggerated head gives him more personality and draws attention away from the boring legs. Unfortunately, you not only shrank the head/face but you also made the legs bigger! His body has also turned slightly towards the camera, which compromises his fighting stance, as do the more relaxed arms (his facial expression appears more relaxed too, but maybe that's just the lack of definition due to the small size), taking away some of the excitement.

Everything else looks great though!
Top

Out or curiosity, for those that don't like the X sprite, how familiar are you all with the source material used as a guide? Do you have the same complaints about the art style Capcom chose when jumping to 32-bit systems?

It's kinda puzzling to me, since I know a lot of other MM fans that would like lazygecko's work. I wonder if it has to do with how exposed we were to different versions of X. If the SNES MMX games are the ones you know best, I can see where the 32-bit art style can be jarring and just plain "wrong" when retranslated to 16-bit.

... I didn't really mean to start defending the X sprite (too late?) but I can't help but think there's some explanation for my being an outlier (and not just poor taste