Seems like I have to use my continuity meter? Can one point which pins specifically should be checked?
Top 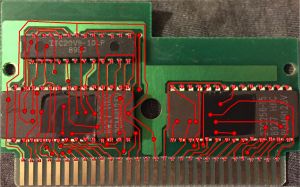 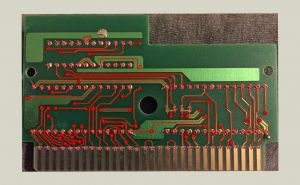 Well, I only got pin 8 wrong and gave up on pin 18, so I guess I did not do too badly for an amateur. Thanks, everyone. We also have the PCB images of 1991 賭馬 Racing (Enjoyable Horse Racing), Mapper 172. The bankswitching code is very similar, so the IC should be functionally similar, but comes in an 28-pin rather than a 24-pin package. But that's for another day (or week, or year).

If anything, it would have to relay the inverse of Pin 9 (D3), and while that one may work for F15 City War and Puzzle, at least as far as I have played, it certainly fails for 小瑪琍 (Xiǎo Mǎlí). The "inverse XOR value" story matches our results with the dumping script as well as the game code.
Top

And since it was so much fun, here are PCB shots of Mapper 136 (Mahjong Trap) and Mapper 172 (1991 Duma Racing). These use a custom IC that is functionally similar to the beloved TXC 24-pin IC, except that it comes in an 28-pin package, having six instead of four CPU (data input) and data output pins. (Although if I understood lidnariq correctly, the 24-pin IC could have as many as six CPU pins connected as well, so I wonder which other four pins' function is missing.) Mapper 172 seems similar to Mapper 136 except that the custom IC is mounted upside down. @krzysiobal: I only noticed this now in your otherwise excellent schematic, but F-15 City War is Mapper 173, not 136. (The thread title was originally "Sachen TCU-2/Mapper 136" because that one started the thread. I have since renamed the thread title to reflect the expanded scope of the discussion.)
Last edited by NewRisingSun on Thu Mar 01, 2018 2:14 am, edited 1 time in total.
Top Does somebody have an idea what the optional 74LS161 in that Mapper 132 board picture might be used for if it were installed?
Top

Assuming it's a real 161... there aren't a lot of options for one by itself without extra hardware. Has to be present over the entire range from $8000-$FFFF, has to have bus conflicts, can't be anything finer than 32K PRG and/or 8K CHR.

(edit) ... Having now traced, I think too much information is hidden under ICs to be able to make a more informed guess. (edit2) It probably just latches the 3 LSBs of the data bus and uses them verbatim in some order as PRG A15, CHR A13, and CHRA14. Possibly the same order as mapper 133?
Top

I can check your guesses with my continuity meter.
Top

That reminds me: could you post images of your Mapper 036 board sometime please? I am close to identifying the function of all the 24-pin ASIC pins, having done so for the 28-pin JV001 variant, but would like to take a look at that board as well first.
Top