The TV-NET controller is a pad with 21 buttons and a switch on the back that is recessed enough that it can't be flipped by hand. I've included a picture below from this Twitter post showing 4 different kinds of this controller; mine is the basic TV-NET version on the left. My guess is that they're all functionally the same and just have different labeling. Unfortunately, while the controller has screws, it's also held together by interior plastic tabs that I've been unable to release. If I figure out how to open it nondestructively, I'll add pictures of the PCB. Thanks to Ben Boldt I was able to obtain TV-NET too, so prepare soon for rev-en. Unfortunatelly my unit does not came with the credit cart, so after I figure out how it is accessed by the console, I'd ask for help to dumping its content.

To open the controller, you have to squeeze (using clamp) the top part in the middle and lever it up using some plastic lever. 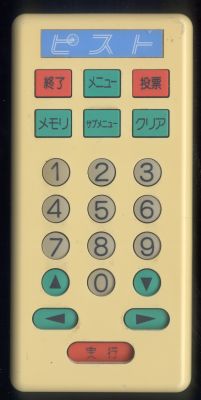