Getsufuu Maden / discrete clone of VRC2 (a kind of)

Getsufuu Maden / discrete clone of VRC2 (a kind of)

First time I see cartridge using 7483 chip (adder). And I always thought that all 74xx chips have GND and VCC in the opposite corners, looks like there are exceptions). Because VRC2 has its CHR-register banks laid in non-aligned addresses, it would require a lot of logic to map them to corresponding PPU range. So.. they added 1 to the CPU address bits and voila 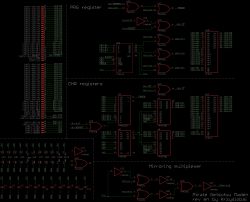