Hi, could someone tell me that font could be used to simulate the NES?, I found some similar but not entirely equal.
The question is, where I can find a font just like the NES?.

The NES doesn't have a font. Text in NES games, like all other graphics, are tiles drawn by the developers of the game.

There are companies that reused the same fonts over and over in their games, so that's probably why you think there's a "NES font".

Your best bet would be to open a ROM that has the font you want in a tile editor and rip it from there. Or open the game in an emulator that lets you see the pattern tables and copy the font from there. Either way you'd have to write the text by copying & pasting the individual letters, not by typing.
Top

Fonts ripped from a bunch of NES games (and a couple on other platforms): 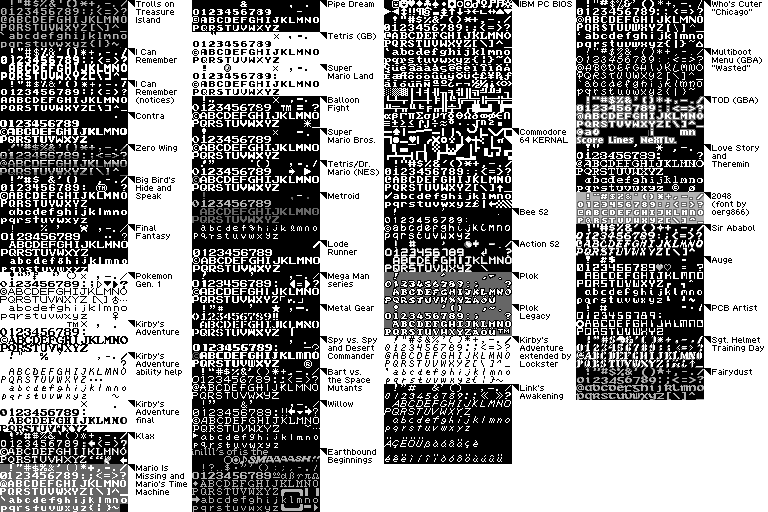 Here's what I use:

Thanks for the info as always guys, I found the willow ttf format, which showed Dwedit seems more standard, which is better finds in my program, on the other hand, where I can find information on mobile platforms?.
Top

There used to be gamedev.net, which had a similar font (libSDL) tutorial.

In my 1945 game, you can look at the font.h font.cpp files which load above thread fontfiles.

So, ripping sprites from commercial games is a no-no. But, what about fonts? I heard that scalable fonts are copyrightable but maybe not bitmap.

It sounds like one would be safer using Eranas font than Dwedits in this case.
Top

slobu wrote:So, ripping sprites from commercial games is a no-no. But, what about fonts? I heard that scalable fonts are copyrightable but maybe not bitmap.

Wikimedia Commons operates under the assumption that bitmap fonts are not copyrightable. Hence Template:PD-textlogo, citing Wikipedia:Public domain#Fonts. Fonts can be subject to a typographical design patent, which lasts for about 14 years in the United States or 25 years in the European Union, but those are not automatic like copyright; they have to be applied for. In any case, the Chicago font (listed under "Who's Cuter" above) was first published in 1984, and any Apple patent on it would have expired years ago.
Top

I somehow have major doubts that bitmap fonts aren't copyrightable. Maybe you can't get a patent, maybe there are US-law specifics, but I think generally it is considered an artwork. Is there a clear explaination of the subject somewhere?
Top

It's the same rationale as for clothing. Too utilitarian for copyright.
Top

Some of the font i have done over the year for different NES roms.
DON-LOAD
Top

It's the same rationale as for clothing. Too utilitarian for copyright.

I wonder if the same applies to sound fonts (set of sound samples used to make sequenced music).
Top

If you want a TTF and that classic "arcadey" font, find Emulogic and put it at size 6 or any integral multiple. Make sure bullshit like font smoothing is turned off.
Top

Sorry for waking up this insanely old thread.. I'm looking for a classical "Nintendo"-font (used in earliest NES/arcade-games) as a TrueType font but have found none that works within Visual Studio. My guess is that the ones floating around are bitmap-based and not vectorbased and VisualStudio doesn't like bitmapped-fonts.
Anyone knows better?
http://nes.goondocks.se/
Top
Post Reply
19 posts