I wonder if this COB famiclone that krzysiobal found contains a UM6561.

There's a bunch of pins over there in the corner (18,19, maybe another one or two) that might not be supply pins and might change the behavior if tied high or low.
Top I have spare UM6561 for testing

Other pins marked as GND or NC in this schematics (32, 18, 19) might act as input pins. There is high probability of it, as multimeter on diode test shows some value for EACH of those pins with respect to GND, so they are internally connected.
Top

I notice that he switched pin 32 from ground (in the initial pinout) to 5V (in his very first breadboarded picture, pin 32 is labelled "GND 5V")
Top

If it is Famicom microphone should I connect it GND (as suggested in Russian schematic) or leave it floating?


I notice that he switched pin 32 from ground (in the initial pinout) to 5V (in his very first breadboarded picture, pin 32 is labelled "GND 5V")

It is definitely mislabeled in the Russian schematic since it is connected to other VCC pins internally.

And here is something interesting :

According to the article described, change the N system as long as the crystal into 21.47727MHz on the line.

I confirm, pin 32 is connected to VCC. So out of those mysterious pins, only 18 is unknown, so it is probably pal/ntsc select.
Top

FARID wrote:If [pin 19] is [P1 D2] Famicom microphone should I connect it GND (as suggested in Russian schematic) or leave it floating?

—
Google OCRs the first two paragraphs of the data sheet as

It does sound like it autodetects crystal frequency and switches between NTSC and Dendy behavior accordingly.
Top

So I did this clever switch and now I can in runtime switch between PAL and NTSC - curiously switching crystal during runtime does not cause CPU to break. 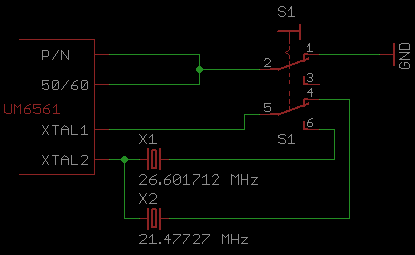 I was worried if connecting crystal with only one leg and putting second leg on long wire and switch will have problems, but nothing that happened!
Top

sorry to resurrect an old thread, @krzysiobal does what you did work with a UM6561f-2? i have 2 game axe color, both in need of a um6561cf-1 both failed. but i got some um6561f-2 that only work with pal xtal, and run terrible. i want NTSC! could you advise me? which pins on the umc package are affected by what you did? or what pins need to connect? BTW im a fan of your pcb and repro work! want to buy some soon!
Top

I have just done some test using my IQ502, UM6561CF-2 based famiclone console (with 26.601712 MHz chip):
1. Replacing the crystal with 21.47727 MHz causes TV lose sync and slower sound, so the chip does NOT have region crystal audo detect frequency
2. Pin 18 is NOT cabaple of switching region between PAL/NTSC. It is some kind of input (with itnernal pull-up to 5V), but when you apply 0V on it, console automatically hangs up. When you look on the scope at the M2 line when pin 18 is at 5V (or not connected to anything):

It seems to change the M2 appearance bit, but its further meaning is unknown.

3. Few weeks ago I had console also based on UM6561F-2 which had 21.47727 MHz crystal and was NTSC mode. Pin 18 was also not connected to anything, so probably the whole chip has the PAL/NTSC region set during the manufacturing process (and thats why some of them have UM6561BF / F / -1 / -2 markings)

So if you want to have PAL/NTSC switchable console, you need to obtain some glob-top clone with ability to add switch button.
Top

Krzy, Thank you, that's EXACTLY what i thought and what i had observed. i installed a F-2 in my game axe to verify the board was fine and it was the NOAC that failed, and I could only get video with the 26mhz xtal. I've got a lead on some UM6561cf-1 from hong kong. looks like im going to have to shell out 25 usd per IC. Im ordering 5 in case of a failure in the future as i have 2 game axes with noac ram that failed due to poor ESD protection in the stock circuit. the 6561F-2 seems to be had for much cheaper, but i just can't adjust to Dendy PAL... lol
Top

Any idea if these NOACs would work fine with 3.3v parts and not have problems in the future?
Top

Could you please show more photos of this board, from all sides? Also a photo of the famiclone itself also would be useful.
Top

Last night I was digging google about UM6561 schematic and those Chinese docs, trying to find its original source.
I found this page : https://zhuanlan.zhihu.com/p/59418044 which has an interesting reference at the end of the web page :

The name of this reference matches to this page which I had before : So it was from this book : it costs only 7 Yuan (=1$), but the problem is I can't buy online because of international sanction of Iran.

Nice wake-up after 2.5 years of inactivity, where have you been for that whole period of time?
Top
Post Reply
31 posts