I accidentally got into possesion of this version so I put photos + reverse-engineered schematic. 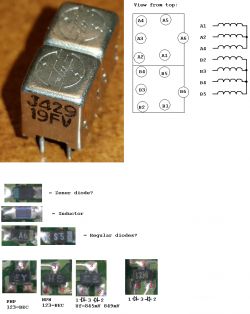 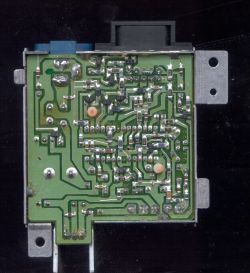 I also rev-en NES (I know there are many schematics but none of them seemed readably to me): 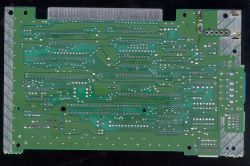 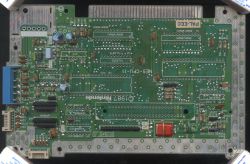 That is pretty awesome, I have never heard of this before. Basically it has a composite to RGB adapter built-in, interesting. I guess this was intended for use with SCART? Have you tried the RGB video / how does it look?

Is this an SNES-style port -- are they compatible? 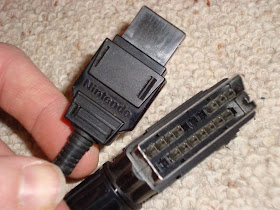 Ben Boldt wrote:I guess this was intended for use with SCART?

Yes, it was, because France was SECAM, and didn't support PAL. So they added a special ASIC from Sony (edit: and designed by ASCII corp? see "アスキー"), evidently, that demodulated PAL and emitted RGBS.

Have you tried the RGB video / how does it look?

I've seen people say it's not very good.
(edit: pictures from Alfredo Calza in this post show the chroma being delayed by roughly 3 pixels after the luma)


Is this an SNES-style port -- are they compatible?

No, neither geometry nor pin position. Physically it's more shaped like the FDS data cable.
Last edited by lidnariq on Wed Nov 27, 2019 3:00 pm, edited 1 time in total.
Top

Is this an SNES-style port -- are they compatible?

No, neither geometry nor pin position. Physically it's more shaped like the FDS data cable.

I have one of these NES's and seem to recall that - to my surprise - the cable is not just similar to the FDS, but fitted perfectly. Maybe not much of a surprise that one proprietary connector gets re-used for multiple purposes...
Top

Bananmos wrote:I have one of these NES's and seem to recall that - to my surprise - the cable is not just similar to the FDS, but fitted perfectly. Maybe not much of a surprise that one proprietary connector gets re-used for multiple purposes...

That actually is a surprise - you want to make it hard for a user to connect the wrong thing. Reusing the connector risks someone connecting the wrong thing, and damaging either the control deck or the connected equipment.
Top

I'm guessing Nintendo found the reuse acceptable because the Famicom Disk System wasn't sold in France, and the French NES wasn't sold in Japan. In addition, an NES power supply will damage a Famicom (though a Famicom or Mega Drive/Genesis power supply will safely power either). By the Super Famicom/Super NES era, Nintendo did change up the video output connector in the same way that it changed the Game Link connector from the Game Boy Pocket and Game Boy Color to the Game Boy Advance: from two rounded corners and two square corners to four rounded corners and a keying tooth centered on one side. (The North American Super NES's power connector was also changed.)
Pin Eight | Twitter | GitHub | Patreon
Top

To quickly make a cartoon of the French NES AV socket:

c = "select" = I assume this is SCART p. 16; the number is cropped out of krzysiobal's schematic.

Yes indeed p.16, I fixed the schematics. So you found bug in the EAGLE PCB software that ignores text and takes only lines in account when calculating dimension of schematic's oputput image.


Have you tried the RGB video / how does it look?

I can't answer - this SONY chip was probably broken because it did not ouput any signal at all. I checked video at its inputs and:
*LUMA VIDEO IN (pin 27) was not changing at all on both sides of C20 capacitor, but was present on upper side of R5 resistor.
*CHROMA IN (pin 24) was ok
so probably some kind of internal short in the chip.

BTW. I did not analyze the STATUS/ASPECT but it looks like utilizing the 9VAC signal from power supply. I thought before that every NES/SNES can be powered without harm with 9V DC (with the exception of rectifier bridge being quite hot)
Top

Hi! I have two of these consoles; one of which works perfectly, but the other one outputs an image with jail bars and a horrible checkerboard pattern. This console was broken when I got it, but fixed it by replacing the bridge rectifier and all electrolytic caps (it looked like it might have had a problem with AC input in the past). Anyway, I am new to electronics and I'm trying to figure out how to fix the issue with the video output. I would like to know what are those two small metal cubes that you pictured inside the rf modulator box? According to your schematic they seem to have some kind of inductors inside of them? What exactly do these components do? Could these be causing any problems?

I want to try to see if by replacing any of the components along the composite video line I can fix the jail bars and checkerboard pattern image issue.

I'm doing this as a hobby and trying to learn more about electronics along the way.