I've been working on implementing copy abilities, starting with burgers (which don't currently require you to touch the ground again before using them again, which I need to implement), gliders and a new bubble ability inspired by Cave Story's bubble gun. I started implementing the ice block but haven't gotten it to work fully. There's also a water bottle ability (with arcs I've since adjusted) with a random selection of four water bottle graphics. 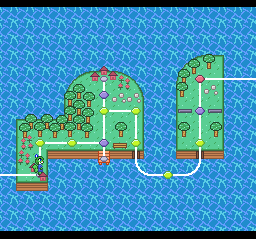 I also have most of an overworld engine. Or at least everything that doesn't involve actually moving around on the map. All the decorations like trees and stuff are sprites, and I figured I'd use them to help me bypass the grid.
Top

Love it. Keep up the great progress. It seems like there is hardly any SNES dev going on so this is exciting to see.
Top

One thing that I found is that if you fall down the screen such that you re-appear at the top of the screen. Then when you swing your tail, no you longer shoot that star out.
Top

Erockbrox wrote:One thing that I found is that if you fall down the screen such that you re-appear at the top of the screen. Then when you swing your tail, no you longer shoot that star out.

That's because non-player objects correctly handle being off-screen when they're drawn, while the player didn't until recently. In the current version (not posted anywhere as a build) you die if you fall off of the bottom anyhow.
Top

Hey, if I make a Let's Play off of this, is it possible that my video (and voice and logo and everything in it) doesn't get "stained" with the GPL license? We've already talked about GPL and what viral/staining means, but this is a specific question.

I'd love to make an LP on this!
Top

IHMO it would. A let's play is not fair use commentary. NovaSquirrel can however give you permission to do such videos as an exception to the license.

It's absolutely nowhere near a point where you would Let's Play it because it has almost no gameplay yet. But yeah, anyone has permission to record and upload footage of them playing my games. It's my intention that GPL applies to the code and only the code - I'm not sharing the source for the graphics, for example.

Here's me messing around with Mode 7 level stuff a bit. I'm going to work on this a bunch and try and figure out something that feels a bit more natural, while keeping the Blue Sphere style if I can. It's starting to feel more like a game!
Top

Wanted to show off my decorations I added! I'm starting to actually put real levels into the game and I have one implemented and I'm starting on a second. That's when I realized I really needed decorations, otherwise they'd feel really empty. I'll gradually add enemies and stuff that I need for the levels, and maybe add more decorations too. Someone suggested I can put stuff in the dirt here and there to add more detail.
Top

Looking good! Just be careful not to add so much detail it becomes hard to tell what's important to the gameplay.

The springs, for example, currently have similar low contrast to the tufts of grass, and if you're red/green colorblind probably similar color too.
Top

Rahsennor wrote:The springs, for example, currently have similar low contrast to the tufts of grass, and if you're red/green colorblind probably similar color too.

Yeah I was thinking that when I playtested. I'll have to make the springs stand out more, or at least give them some space horizontally away from other things.
Top

I've got the overworld map to a state where you can move around on it and select a level. No polish there yet. You can also exit to the overworld or go through exit doors to get back to the overworld. I later want to add a screen between the overworld and level itself, but not sure how I want to design it just yet.

I also added the volcano enemy from the previous game, who now has a warning that shows where he's about to throw towards. The aiming is really simplistic and I currently just do atan2 and subtract a bit from the vertical velocity. This actually works pretty well, but I definitely need to tweak it a bit.

Also have a bunch of fire enemies implemented, and I actually have two whole levels now. I'm mostly focusing on getting the gameplay for the first world complete for now and then I dunno where I'll go from there. Importantly, ability copying is in finally!

One big change I have from the previous game is that enemies actually have HP now, and abilities do varying amounts of damage. This lets me buff abilities that are a little harder to use (like the bombs) and nerf abilities that are easily spammable (like water bottles) without putting other limits on them. Many things die in one hit from fireballs like before, but I'm thinking of having stronger enemies where it might benefit you to try and use explosion damage instead.
Top

In the 3d level, the way the character keeps pacing when standing still makes it look like they need to pee.
Top

Haha yeah, I put in the minimal amount of effort for that because I don't have a proper walk animation yet but still wanted to display a character to get a feel for how it'd look
Top

I've been playing around with more copy abilities; here's a remote control missile that can be guided. I intend on putting in more remote control abilities and having an emphasis on using them to solve puzzles and such.

New background for the inventory screen! Now it's not just whatever the level's background color was set to.

Since you only really see the back of the player during the Mode 7 levels, I put a portrait of Maffi in the corner.