Concentration Room looks great for a NES game, the animations are very smooth and the cards are pretty colorful. I guess you can go crazy with the colors, since only 2 cards are visible at a time and you can probably reconfigure their palettes every time they are flipped.

But I have to admit I'm a little disappointed though. When you said you were working on something new I expected something more action-oriented, with scrolling and moving objects, specially since you were working on President and all, but no, it's just yet another 1-screen puzzle game.
Last edited by tokumaru on Fri Mar 27, 2020 11:55 am, edited 2 times in total.
Top

tokumaru wrote:But I have to admit I'm a little disappointed though. When you said you were working on something new I expected something more action-oriented, with scrolling and moving objects, specially since you were working on President and all, but no, it's just yet another 1-screen puzzle game.

Sivak started there too.

Drag wrote:Sivak started there too.

But tepples started long before Sivak, and I'm certain he knows more about NES programming than Sivak, but for some reason he decided to go with a plain game instead of making better use of that knowledge.

Nothing against tepples' game in particular, these kinds of games can be fun too, but they are hardly technical achievements when compared to games made when the NES was the most successful gaming system around. How many puzzle games do you have in your cart collection? Even if you have many, I bet it's much less than action games.

The NES homebrew scene is still coming up with very primitive games, despite of all the tools and knowledge that are available today.

I admire Sivak for having learned about the system so quickly and for actually elevating the level of complexity of his projects, always incrementing the level of challenge each time instead of relaxing at a comfortable point. I don't admire the fact that the only way to play his games is by paying though.

P.S.: tepples, feel free to split the thread to one about homebrew game complexity, because I don't want to hijack your game's thread.
Top

The homebrew scene has taken a long time to get to this point, a lot of trial and error and accumulated knowledge over the years. It seems a waste to take all of that to make something as simple as a puzzle game that is also vaguely offensive and demeaning in premise.

Of course this is most likely the intended response anyway, it's supposed to be deconstructionist/postmodern/whatever. That doesn't mean much to me though. I'll probably stick to my favorite concentration game instead.
Top

LJ65 was supposed to be my first published NES title until Tetris Holding started to crack down on non-Tetris products implementing the same game rules as Tetris. Concentration Room is largely a replacement for that; I'd bet similar games were actually played since the 1940s if not earlier..


How many puzzle games do you have in your cart collection? 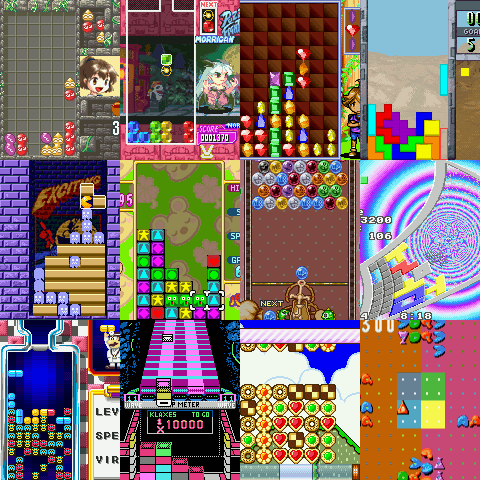 "What are Dance Dance Revolution and In The Groove doing in this pic?"
Music games like D+Pad Hero have been misclassified as puzzle games, though I think they're closer to racing games. And if you've played Amplitude for PlayStation 2, you'll understand why.

As for why I haven't been working on President, a full-time day job plus record low temperatures with snow plus no artist makes things like a side-scroller take longer. I think I ran out of steam on President in September. From then to October 31, I was physically training for a strange Halloween custom. Then during November, I kept the leaves from going astray, and after Thanksgiving, I started on Concentration Room. This is in fact my third try at this concept, after attempts in 2000 and 2007 that fizzled.


EDIT (March 2020): Removed a link that had become broken after the June 2012 ruling; corrected the game's title. If you're curious about the second try, it's part of my little things repository.
Pin Eight | Twitter | GitHub | Patreon
Top

From what I have observed, successful and prolific NES homebrewers start with simple games, then move on to more ambitious projects. I'm trying to emulate this behavior and I hope it will result in my game project getting finished!
Top

Gradualore wrote:From what I have observed, successful and prolific NES homebrewers start with simple games, then move on to more ambitious projects.

Sure, beginners are completely right in starting with simple projects. But tepples is no beginner, and although he hasn't "published" a game yet he certainly has what it takes to make something much better than just another puzzle game.

I also have a lot of knowledge in spite of not having published anything yet, and I sure wouldn't like to start by releasing something inferior than what I believe I'm capable of making.
Top

I am trained as a programmer. I am not trained as an artist. Puzzle games tend to require less art. If I had a talented artist working with me, I would be more inclined to work on a more action-oriented game. Any volunteers? Or must I produce the entire game first by myself, with typical substandard programmer art, and wait for someone else to come along and graphics-hack it into something presentable?
Pin Eight | Twitter | GitHub | Patreon
Top

I fully understand Tepples' position. It seems to me in most cases a programmer while they can design the game and make the program code and put it all together, they generally lack the skills to generate all the art that goes into it like graphics and sound/music. It is very hard to make a game without having the art assets ready. Simple games you can generally get by but to make a game on the level of say Castlevania 1, would be very hard.
Top

This is one reason that I'm making the MM9 proof of concept. I don't have to worry too much about the assets (even though I still need to re-adjust them once they're ripped) except for the meta-data related to it and I can focus on the engine only.

Once my engine will be done, I will see how I can get the assets ready for my real game but I don't think I can pull it off myself.
Top

Man, artists are much more abundant than coders in my opinion. You show up at the proper place with an interesting project in the works and it will rain artists.

Back when I talked about my Sonic project on the Sonic Retro boards people suddenly started making NES versions of the songs, I got PMs from people that wanted to draw sprites, and I didn't even ask for any of this. Over at Atari Age I've also seen artists helping programmers a few times. I don't think that finding an artist is as hard as you guys are making it out to be.
Top

tokumaru wrote:Man, artists are much more abundant than coders in my opinion. You show up at the proper place with an interesting project in the works and it will rain artists.

Then it would be nice if the wiki had 1. run and jump animations of various sizes to stick in the engine while testing it in early development before it is ready to show to artists, and 2. a list of forums known to have eager pixel artists.
Pin Eight | Twitter | GitHub | Patreon
Top

tepples wrote:I am trained as a programmer. I am not trained as an artist. Puzzle games tend to require less art. If I had a talented artist working with me, I would be more inclined to work on a more action-oriented game. Any volunteers? Or must I produce the entire game first by myself, with typical substandard programmer art, and wait for someone else to come along and graphics-hack it into something presentable?

This is the same for me. I'm a programmer, and I also have some skills in music composing and basic drawing skills, but that's a bit short to make games all on myself.
Life is complex: it has both real and imaginary components.
Top

I could probably do it, and perhaps easier than most since I know about the NES's limitations and ways to work within/around them.

But then you have the problem of creative control. Unless I was getting paid, I would want it to be a true collaborative effort, and not just "draw these things for me." I wouldn't want to attach myself to a project that I think looks bad because it doesn't support enough frames of animation, or uses too many palette swapped enemies. Or if I don't want to draw emaciated Jews for the camp level and think a regular ice level with penguins might be a better idea, I'd expect my thoughts to be heard.
Top

Maybe this discussion about asset creation should be split to a new thread?

I chose NES development because asset creation would be easier on the NES than on other systems. I too am not really an artist by trade but I guess I felt that if I couldn't get anybody to help me, if I tried long and hard enough I could create my own sprites/backgrounds. It's not like you have to have a steady hand to draw a sprite, you just use a lot of trial and error of clicking pixels to different colors =) Fortunately though my wife is doing a little bit of art for me and she's doing a great job at it. My hope is she can do some of the "main" art items of the game that receive a lot of focus, like the main sprite, a couple of bosses, etc. and I should be able to hack out the rest.

As for music, I am also a musician so it is pretty easy for me to compose music for a game. Music has always been a really important part of a good game to me so I'm looking forward to this part of the development process very much.
Top
Post Reply
53 posts