I've been researching this subject extensively for a cart I want to produce for a friend as an xmas gift. So here's what I've seen:

This site and ultimate-console.fr seem to have the most useful information. Though most people seem to have derived their knowledge from the sparse ROMLAB site.

slpcat's Blog has lots of good information as well, though not in much detail. He also has a few related videos on YouTube.

Rev Pon's Blog is another great source of information.

Nintendo Age also has a well documented cartmod in the issue of their zine from 10/2009, which can be downloaded for free once you register.

SNES Central has lots of technical information about cartridges.

When searching for these, you'll come across various versions from different manufacturers. If product code contains one of the codes above, then it based on the same design and should be interchangeable.

You'll find most tutorials making use of the 27C801, because it works for most games and is the most easy to accomplish.

It's also important to note that the 27C801 and 27C322 aren't being manufactured anymore (from what I've read), so their prices are rising. You can always erase used ones, but new ones are becoming more rare.

Acceptable and cheaper EPROM programmers included the Willem and the GQ-3X/GQ-4X.

Most people don't recommend building one. Though if you want to save money, the EZoFlash is a Willem compliant option, some people have done this, but if you're new to electronics work you'll save time and anguish buy buying a cheap one.

People recommend using the SNES power supply with the Willem instead of USB power for reliability reasons.

The easiest way to get your game ready is to use another game, usually referred to as a donor cartridge, with a PCB that supports the features you need. Generally you remove, what is called, the MaskROM and replace it with an EPROM burned with your new game on it. You need to pay attention to if the game you want to write is HiROM or LoROM, and choose a donor cartridge accordingly, SNES Central has lots of info on this.

For the 27C801 & 27C322, this generally involves making minor alterations to the PCB and adding additional wires to your new EPROM because the pins on the newer EPROM's don't match those of the MaskROM's. Some games require multiple EPROM's and another IC to tell the cart how to use them together. The disadvantage to this is when you need many EPROM's, it can be difficult to make them all fit nicely in the cartridge.

When you're working with the 29F032, you'll generally need to use TSOP to DIP36 adapter board. This circumvents the need to alter the original cartridge PCB resulting ins a cleaner looking mod. It's also important to note that the size of the 29F032 is 4x that of the other EPROM's and therefore is better suited to larger games. The disadvantage is that you'll need to buy or made the additional TSOP to DIP36 adapter. This involves soldering the 29F032 to the adapter board, and this chip's leads are very tiny. Most people recommend tutorial videos on YouTube to help with technique. Here are a couple good ones. The other challenge is that you'll need another adapter to program the 29F032, because it isn't in a DIP form factor, your EPROM programmer cannot use it without one. These can be very expensive. More than some of the cheaper programmers themselves! It is also possible to build a programmer that will let you program the chip from the DIP36 adapter board. A schematic for this is on the ROMLAB site.

buiICnow.com sells the TSOP to DIP36 adapter boards. Many people have designed them, most seem to be working from the design on ROMLAB. I have seen people report success for both of the boards ( Type I and Type II ) listed on the site. As a side note it's important to remember to bridge the resistor contacts on the Type I with either 10 ohm resistors or just solder. Most people claim you don't need the resistors, and that a solder bridge is sufficient.

Once your EPROM is burned it's a matter of soldering it to the cartridge PCB and testing the cartridge. Many people have also made tools, such as cartridges with sockets to allow easy swapping of EPROM's to help with testing.

Edit 12/16/11: BUYICNOW has added a "Type III", which just appears to be a Type II? The numbering is reversed in the PCB image, but other than that all of the traces appear to match identically. Odd. Well I have just ordered 4, so I tell you if I notice anything strange.

I'll happily further update this with more info as I gather it. The challenge is that this information is really scattered across many forums and languages. Remember to use Google Translate!

The one thing I can't seem to find better info on is the TSOP board to Willem adapter. That seems to be an active discussion here right now as well. People have made them. I've seen dead links to what I think are PCB designs for this purpose. There is a schematic on ROMLAB for one.

Would someone who has built one of these adapters be willing to explain making on in as simple terms as possible? I can't seem to find more information on the subject other than the people who have built them saying they have done so. TSOP is CLEARLY the way to go, but programming them easily seems to be a challenge/expensive without this adapter.
Top

Well, I just promised one of my spares to SkinnyV, but I can provide my CAD files if you want to have one made up. I used Laen's PCB service on DorkbodPDX to have it fabbed up. It took about 2 weeks, and I received 3 copies for about $8 shipped. My design was done with his service in mind, so all of the specs fall within his minimums.

I want to keep my other board just in case something happens to the one I have.

As an aside, I am working on developing a website with all of the information that I have gathered thusfar. As you noted, the information about Cartmodding is spread over a half dozen websites, and numerous chatforums. I have been collecting information to consolidate into one place. Once I have some information put together, I will post this website around for others to use.

I will be putting any PCB designs that I know work on this site as well once complete.
Top

Oh, and 29F032's are no longer being made new in production quantities as far as I can tell. It seems that you can have them made to order, but lead times and prices are long and high (well, unless you want quantities of 1000's)

Hehehe... yeah, it kind of does have that effect.

Yes, that would be great! Where can I get the file(s)?
Top

I am looking through my email now. I made the CAD files at work so I may only have them there, in which case I will have to wait until tomorrow to post them. However, If I have a copy at home, I will post it this evening.

However in the meantime, this is the link to the PCB fabrication that I mentioned: http://dorkbotpdx.org/wiki/pcb_order

EDIT: Looks like I do not have the file at home, so tomorrow morning I will put it somewhere and put a link here. I do need to make a modification to the drillsize on the files, so I will do that first.
Top

Thanks infomation guys.nice to meet you.

slpcat: you have some great work there, at some point, I need to go back and work on my 27c801 32mbit test setup, as its not working properly right now, and I may just use your photos there for reference.
Top

I assume you saw the link from my post above to bring you here! Thanks for posting your work. It's very useful! Please continue to share! More photos and videos, please!

Cheers from the US!

Awesome. Yes please. Post tomorrow if ya can! I'd like to get that order in sooner than later.

Also, slpcat has a page on that particular item:

rkrenicki wrote:slpcat: you have some great work there, at some point, I need to go back and work on my 27c801 32mbit test setup, as its not working properly right now, and I may just use your photos there for reference.

if you have some question,I can little advice and tips.
and i agree use for reference on my website.

I assume you saw the link from my post above to bring you here! Thanks for posting your work. It's very useful! Please continue to share! More photos and videos, please!

Cheers from the US!


hello dranore. i made lot of machine and photo.
I put my website on some pictures.but now only photo.
http://slpcat.web.fc2.com/syashinkan.html
and thanks visit my website!
Top

I am editing my design for some larger drillsizes. Once that is done, I will post my final version on here.
Top

It bears an uncanny resemblance to mine 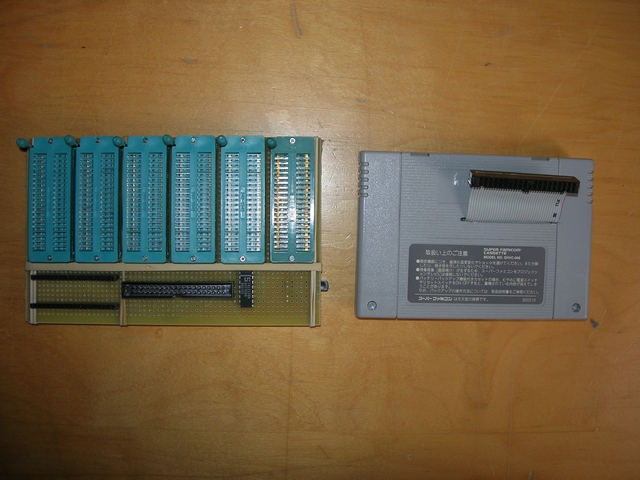 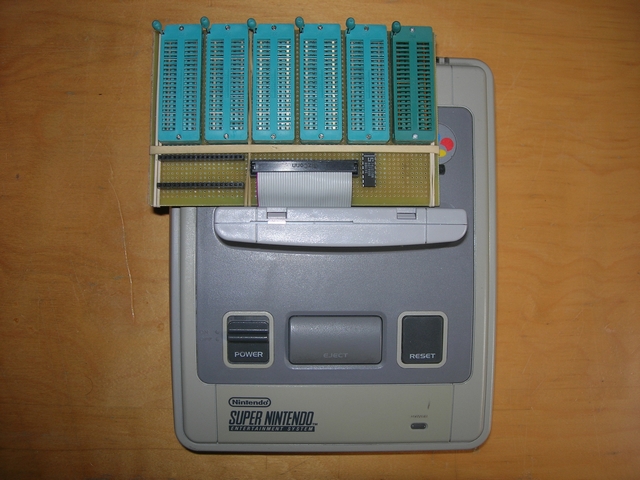 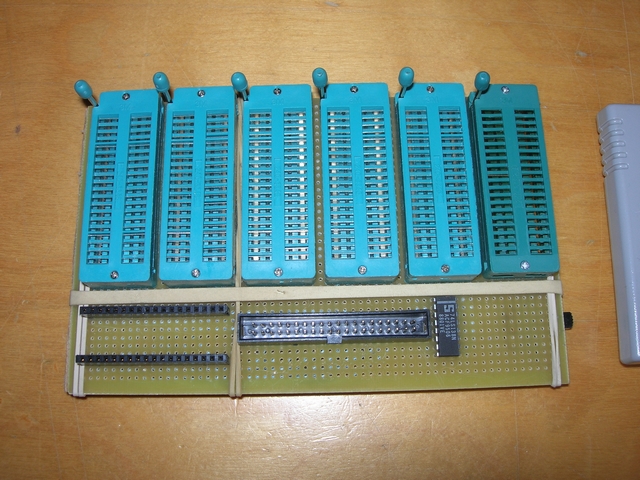 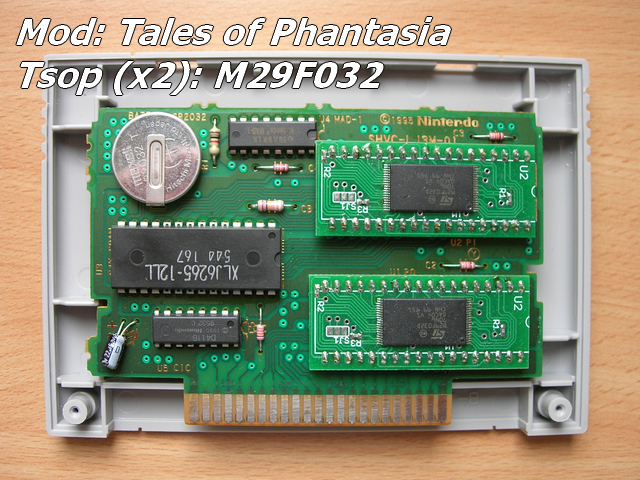 Dwedit wrote:The every-other line spacing and scattered links made me mistake this post for SPAM at a first glance. Spooky.

I consider people asking about "catmodding", aka, "how to make $100 easily by selling your counterfait cart", to be spam.
Life is complex: it has both real and imaginary components.
Top

I dont resell my carts, nor do I intend on ever doing that. I buy original japanese games, and replace the roms with english translations for my own use. The only cart I have made that is no longer in my possession was given to a friend of mine as a gift.

I understand that some cartmodders do that, but I am sure at least a few are like me, doing it for my own enjoyment and buying original titles.
Top
Post Reply
82 posts