I have been attempting to do a RomHack of NES Monster Party, based off this restored version.
http://www.romhacking.net/translations/3115/


I changed the intro and outro text, but the scene breaks aren't right. The game will still jump back and forth in the text script, apparently honoring the original length of each scene. It must be seeking a point in the ROM.

I'm new to this, so I must be missing pointer hacking, and I need to learn about that now.

Presumably there's another point in the ROM which seeks to this specific point to get the text, and those points need to be updated.

After much research (and use of a Pointer Calculator), I was unable to learn how to read (or accurately find) the pointer table for the intro and outro. At the moment I have instead reworked my script to use the existing ROMHack's scene change points. The result is awkward, but will do for now.

The boss text is also handled in a different way, with collections of only certain letters included in the later CHR banks. I would need to create several new LUTs for the boss text, probably based on what FCEUX is outputting. I may not bother to do this.


I plan to replace the graphics in the intro/outro/title, and will experiment further with that, though it will probably require knowledge I lack since ideally the graphics would be arranged differently than the existing version, and use different palettes.

There is a level and screen editor for Monster Party but it doesn't really work on this prototype restoration, or my hack. I wonder if it could be reoriented to work?

Theoretically, I'd like to learn how to replace the title screen in an NES game entirely, with a more complex one, or add more graphics to it here and there.


There are also a number of Game Genie type codes for this game which allow you to skip to the last level with invincibility, which let me playtest the ending cutscene. This does not work on the prototype restoration, and I wonder if alternate Game Genie codes can be come up with? 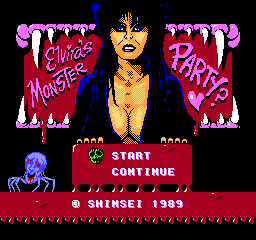 I was hoping for this, for the title screen, but this is impossible without rearranging the tiles (and palettes!) somewhat. That's possible using the Monster Party editor, but that doesn't work with the Restored Prototype ROM, only with the US release. I wonder if I could work with the US release and then copy/paste the code, without breaking it? 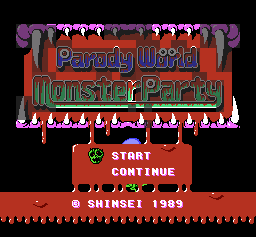 These sections of the title screen are editable in this ROM. Some of them repeat. 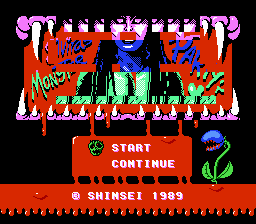 The palettes also aren't right so the test is a bit of a disaster ...


The other obvious stopgap option is being a lot less ambitious, and just changing the text to "Elvira's Monster Party." 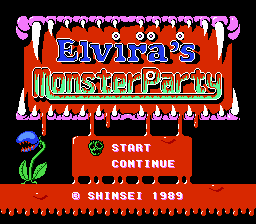 Here's a four color version of the original. 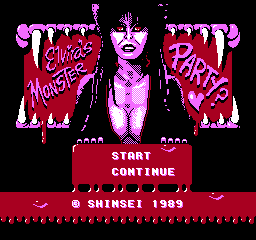 Here's how that would look as a CHR. There's too many unique tiles for a 256-tile CHR, but some could be removed and reworked.

Elvira herself is basically symmetrical, but I don't think that background tiles can be flipped. 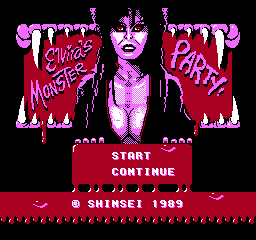 After a frankly absurd amount of work tweaking the graphic, it now has enough repeated tiles to fit in a CHR bank. 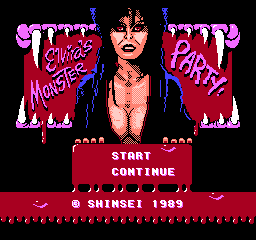 And here we are! This took hours of work, but it's working in the ROM!
I had to disable the palettes because they're set to alter specific rows of the screen, so it's only a four-color image. I also couldn't edit the last row, so I had to raise her chest and fingers one row. The blood and fingers now look out of place. 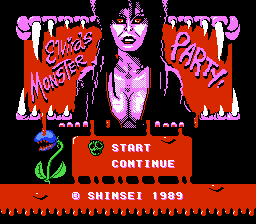 Without blood and fingers: 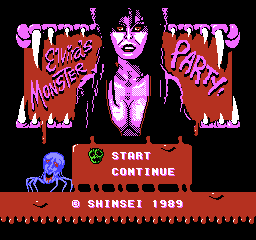