I can't believe I didn't notice this before, but the Satellaview EXT connector is nearly just an 8-bit version of the parallel ATA/IDE interface; even part of the pinout is virtually identical: 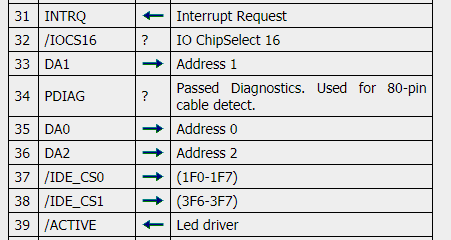 What's that in practical terms? Someone with a Satellaview can hook up a CF card, and have their game contain 128 GB of data?
Top

Cool, that does in fact look very similar - and it does explain why they came up with two chip selects instead of using a fourth address line.

As far as I remember somebody made a homebrew adaptor for connecting 16bit-only drives to 8bit computers using a dirty trick: It's simply leaving each second byte unused, so you get only half of the drive capacity. The advantage is that it should work with all 40pin/parallel drives, and even halved capacity should be huge for SNES standards. The downside is that one couldn't swap the drive between 8bit and 16bit computers because they'd either see each 2nd byte missing, or see garbage bytes inserted between each byte.
Top

(note: I also edited my previous post since I think I had the IDE CS0 and CS1 signals the wrong way around previously)
Top

Interesting. Sounds like a CF/EXT adapter would be the way to go, then, but since there's no BIOS support I have no idea what it'd actually be useful for aside from some extravagant homebrew project...
Top

As the HDD interface is mainly consisting of an address decoder, one won't even need the BSX base unit for that, one could as well built some small circuit that decodes 21Axh, and wire it to the SNES mainboard, expansion port, or cartridge slot.

For some context, the quote is from a case study on the HP Kittyhawk hard drive project from a business standpoint. The study did mention that Nintendo was a potential customer and showed interest in the hard drive after the idea of a miniature mass storage device was pitched to Nintendo marketing manager at a trade show. What 'system' the quote mentions can be up for interpretation but I am placing bets on the Satellaview.
Top

Out of curiosity, I found a Dauphin DTR-1 tablet - an old portable touch screen MS-DOS tablet produced around 1993. It has a Kittyhawk hard drive in it. I purchased to see how the drive would fit.

Plenty of room to build a plastic enclosure around this and fit an adapter to connect the hard drive to EXT port.
Top

I have a Microdrive or two somewhere, larger IBM models IIRC, a GB or few. They come in the CF form factor, with a CF connector. Early iPods used those.
Top

Pretty interesting find about the Kittyhawk drives. A small form factor drive like that would have made sense for a console peripheral, but it sure is small for the amount of space in the actual bay.

I started prototyping a CF adapter board just for fun earlier this week, I might post the KiCad files / some example software to read the card whenever I start writing the latter (probably sometime next week).
Top

This took longer to get around to doing than I meant it to, but I managed to successfully read a CF card through the Satellaview EXT port: images here

Well DaveyPocket got ahold of a BS Encoder (Kenwood BS-3600), and it generates BS signals from back then, and guess what?

This will be super helpful. Hoping to find some documentation on the device actually.
Top

Uh, what is that "Kenwood BS-3600"? It looks like a beep-generator with train-station-sized LED display... or does it have some slightly more useful features like converting incoming analog or digital audio to digital BS format? And what was that thing good for, was it for broadcast stations, or was it some sort must-have daily madness home wifi equipment?
Anyways, it's a pretty good finding for testing the satellaview hardware.
Top

The BS-3600 is capable of encoding video and digital audio to the standards compatible with BS decoder set-top boxes. There is a built-in function generator to test the audio channels. It has the capability of accepting external audio input from an external analog-to-digital converter (which I do not have). It might be capable of encoding auxiliary data but I am unaware as I do not own documentation for this device. The BS-3600 seems to be intended for manufacturing/repair/testing of BS-related equipment, definitely not intended for the consumer market.
Top
Post Reply
113 posts