Bushido Bomb is a simple 2 player platform fighter. Its a hobby, open source, home brew project made to run on the nes. The objective is to die the least and the first player to get 9 deaths loose the match. You die in one hit, the idea came from the game Bushido Blade on the PS1. The player’s are bombs and you attack each other with a lit torch. The players and inside jokes on the map bomb basement are based off the video game website GiantBomb. 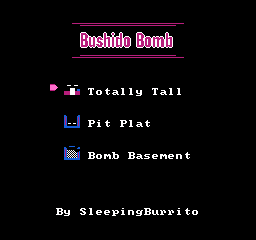 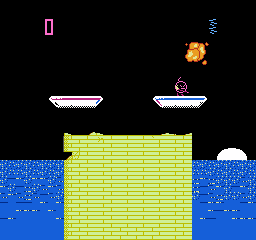 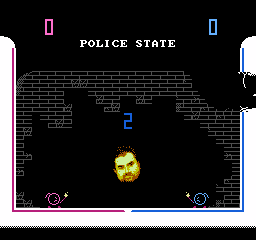 Or code and rom here:
https://github.com/sleepingburrito/BushidoBomb
Last edited by sleepingburrito on Thu Jun 13, 2019 9:24 am, edited 3 times in total.
Top

It looks pretty cool, I'll have to try this with 2P sometime. I like those reflections on the pit level.
Top

Update, I added smoke effects and attempted to add sound effects. I updated the rom in the first post and the github link.

Very very cool. I will have to fire it up and give it a play!
Top

Maybe it's worth copying the last line of background tiles from the first screen, to the beginning of the second one? (23A0-23BF copy to 2800-281F). It's about the screen shake effect, in PAL you can see the black bar at the bottom (the first line of tiles appears on the second screen when the screen shakes).
Top
Post Reply
5 posts • Page 1 of 1