So I made a post in the NESDev forums a while back, and said I would make a small platformer game to test out how viable making a full NES homebrew project in Millfork would be. I've come back today to let everyone know that for the most part, it is viable! (With some caveats as well, however.)

Click here for the link to the github repository, and click here for an up-to-date version of the compiled .nes file

I'll talk a bit about what it's like building a project like this in Millfork (rather than assembly) later in the post, but for now I'll list out some of the key features in this game I was able to implement:


The last feature is one that I'm really excited about. I've made a Tiled python plugin script to quickly and easily make/export maps to the necessary file format for use in this engine, but you could also use this as a base to implement your own file formats for Tiled to export to.

In addition, I've tried to make this game fairly easy to add on to, whether it be adding music/sfx, animations, enemies, etc..., I have provided READMEs and instructions on how to easily add in new objects and hook them up to the game engine. There's still some documentation that I have to fill out, and I will definitely be refactoring some of the code that's a bit cumbersome to add on to, but for the most part the current base engine can be fairly quickly added on to. To prove this, take a look at the version from 2 days ago and the latest version. I was able to add in a new enemy, finish up the logic for an existing enemy, and make a whole new map in just a little over a day. As I said before, I do still plan to work on the engine and improve its use/efficiency, so if you plan to tinker around with it, keep in mind that I may change things in the future.
So anyways, onto the Millfork stuff.

A Few Words On Millfork:

For those of you who don't know what Millfork is, it's a higher-level programming language for 6502 and other processors. I'd recommend reading up about it on its website, but the gist is that it's meant to be a C-like language for old processors that is somewhere in-between assembly and high-level languages like C.

The reason I chose to use it for this project is that I wanted the code to be more readable than assembly, while still retaining most of the performance. With that in mind, here are the pros and cons I've encountered that are relevant to developing NES homebrew in this language:

First, the pros:
Now, the cons: So in summary, after spending ~1-2 months working on a project entirely in Millfork, I'd rate the experience as being a whole lot better than programming in assembly but with a few pitfalls you need to watch out for. I recommend this for people who already have some exposure to assembly, but don't want to deal with making a big project entirely in assembly.

I plan to continue to add to this project with more refactoring/general improvements, with my next big milestone being to port this over to a different mapper, most likely UxROM. So if you want to use this as a base to create your own project (which is what I actually intended!), keep in mind that you may want to just read over the code but hold off on modifying it until I release a more stable version.

Thanks for reading, and I hope this was useful to you!
Top

That's interesting! Thanks for posting.

pubby wrote:That's interesting! Thanks for posting.

Whoops, I meant to say "assembled code" rather than assembly. The compiler itself can't generate compilable assembly, but it can export debug files for various emulators (including fceux), which is what I used to read the assembled output.

Upon reading through more of the assembled code, it seems that a lot of the space issues can be attributed to my programming... I have some optimizing to do, but in the mean time here's an example of a function that is fairly well optimized:

This routine was the nmi routine used by the title screen and loading screen I believe.

You may notice that there are some weird variable names in the assembly version that don't appear in the original millfork code, this is because the millfork optimizer re-uses local variables (when they're not being used) as temporary variables in order to save space. So you can basically code regular C-like functions with a few local variables and not have to worry about allocating temporary variables. For most part, that aspect of the optimizer has worked really well in my experience.
Top 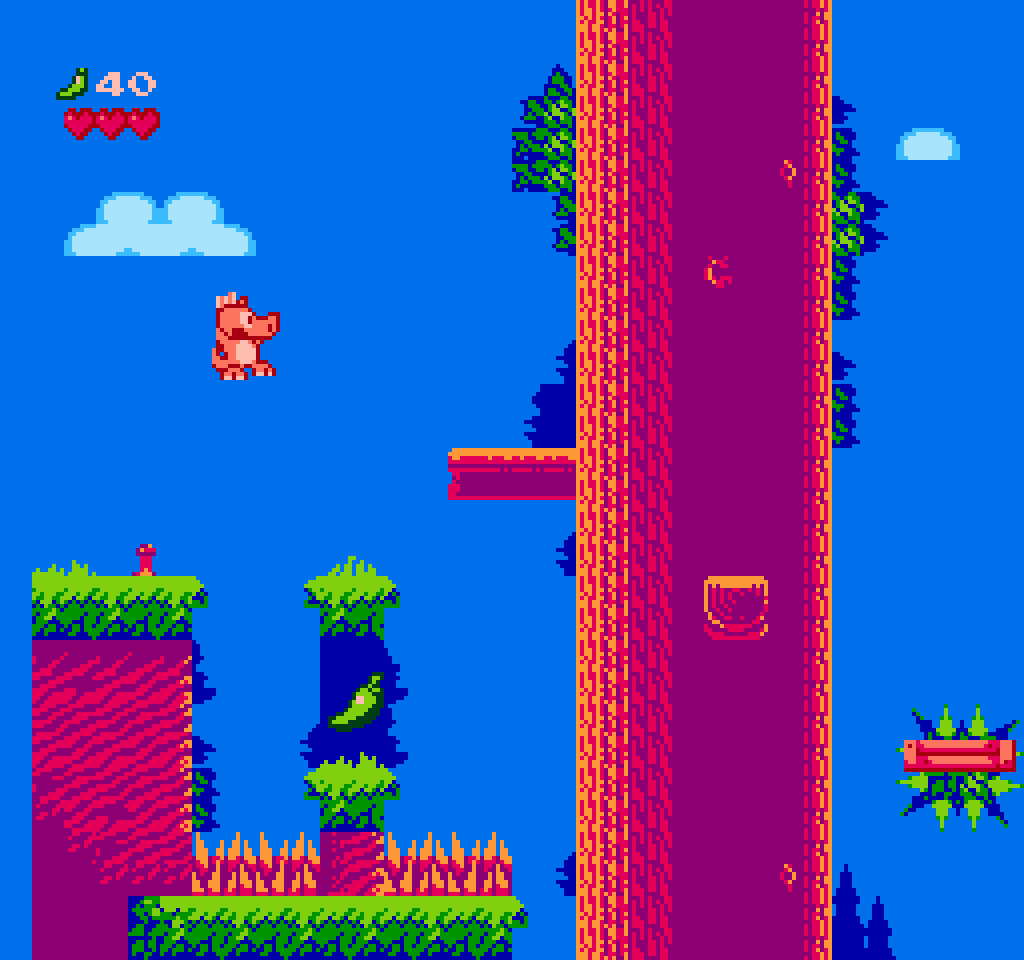 Maybe you should change something...

Maybe you should change something...

Huh, I can't believe I never once googled "twin dragons nes". Well, the main goal of my project is to provide an open-source base for other projects to build upon, so this specific demo being similar to another product isn't really a big concern. I'll be mainly focusing my efforts on building up the base engine rather than the game-play specific to this game from now on though, so thanks for informing me of this.
Top

Wow, this is really cool!

Did you like using Tiled as a map editor? I just started looking at it a couple of nights ago. Did you find it hard to fit concepts like metatiles and palettes to it?
Top

Did you like using Tiled as a map editor? I just started looking at it a couple of nights ago. Did you find it hard to fit concepts like metatiles and palettes to it?

I can't speak for this project, but I'm someone who uses and loves Tiled, and would be happy to talk about strategies for making it work for NES with metatiles and palettes. If so, we should branch that out into a different thread.
My games: http://www.bitethechili.com
Top
Post Reply
7 posts • Page 1 of 1