MOON8 - Dark Side of the Moon cover

MOON8 - Dark Side of the Moon cover

I did this about 2 years ago, but at the time I didn't know how to get this stuff onto an actual NES. So... I finally got around to building an NES ROM / NSF version. 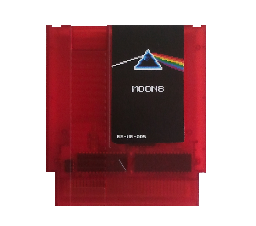 How about some of Wish You Were Here next?

Or Division Bell with speech synthesis?

VERY cool. Nice to see music showcased so well all on its own. The sound channel display is pretty neat too.
Top

Thanks. I dunno if I'll be making another cover album any time soon; I did a Classical Album last year (but it's not ROM/Cartridge-able because it uses various expansions). Probably will do something original later this year.

All we need to do is make sure we Steve Hawking.

Awesome on moon8, I've got my order in!
Top

Out of curiosity, how much were you selling the cartridge version for?
Top

Mmh... this is supposed to sound like music ?
Useless, lumbering half-wits don't scare us.
Top

It's supposed to sound like Dark Side of the Moon. The opening track is a collection of noises, maybe start at "Breathe" if you want to hear "music".

juef, I will probably do a second run of them, but I haven't settled on a price yet. I'm still collecting information and considering how the first batch went.
Top

Out of curiosity, how much were you selling the cartridge version for?


I was trying to avoid going into it, but I received a disturbing e-mail today from a buyer complaining that I was planning to make more, because apparently the presumed scarcity was what motivated him to buy it. This seriously offended me, as my goal is to get this in the hands of anybody who wants it at as fair a price as possible. (This is also why I released the ROM and source freely.)

Anyhow, I was going to explain why I think this is a fair price, but then I thought I'd do something better and "open source" my breakdown here, since this would probably be interesting to anyone who wants to build carts.

Between gathering parts, burning EPROMs, soldering, assembling carts, and testing, I did not keep a good record of my time spent, but I think each cart takes an average of 40 minutes to produce. About 20 minutes of that are spent soldering, though I had many fail initially that worked after some additional time resoldering them.

On 25 carts I had 3 failures I was unable to fix, and have withheld 4 working carts from sale in case any need to be replaced.

The flat rate shipping prices I offered were slightly less than the actual cost of shipping via Canada Post (I rounded down to the nearest whole number). For the purposes of this calculation, I'll ignore the difference.

There are a number of costs not included here, some are one time costs like an EPROM burner, a soldering iron, tools, powerpak, etc. I am not really sure how much solder I used, maybe $0.25 worth per cart? Also, obviously I did not include programming time, or any of the time I spent originally making the music (this is probably well over 100 hours, maybe 10 of which was programming this ROM).

So, ignoring all the setup costs, at $45 this is a minimum wage job. I'm not really complaining about that, as I'm doing this for fun and am satisfied as long as I'm not losing money at it, but I think you can see why I was offended by someone complaining that their collector's item isn't going to be "collectible" enough. I want make this cart as accessible as possible to people.


There are a number of ways to cut costs. If I'm lucky I will have fewer failures in the next batch, and fewer that need to be reworked after the first soldering. I had some problems with my soldering iron as well, especially with the through holes on the PCB that were attached to the ground plane. I eventually got a more appropriate tip for my iron, and developed a bit better technique, but I'm hoping there aren't latent failure cases in the ones I sent out.

Some have suggested donor carts as an alternative to retrousb new parts, but this is $15/cart vs whatever the cost of donor carts and probably at least 20 minutes of labour desoldering the chips and removing the label, provided you can even find large quantities of cheap carts with the right mappers, and presuming the failure rate isn't even higher with donors. (Also you have to be willing to destroy existing games, obviously.) I don't really think I'd want to try that route for more than one or two carts. For making 20 or 100, I think new parts are the way to go.

If I was making a batch of 100, that's about the point where is seems to be worthwhile to have my own PCB made. Not sure about plastic cases. The Ciclone I don't have the knowledge/ability to replace, and probably you'd need to make 1000 of them to be worthwhile? Other electronics parts get slightly cheaper at 100 units. For my smaller quantities, retrousb's parts are as cost effective as it gets, I think, if you aren't willing to scavenge donors.

There's about $2 worth of royalties per unit necessary for these that wouldn't be for an original game.


Also, one seller bought several carts. In retrospect I think I should have cancelled this sale, as this was unfair to others given the limited quantity, but at the time I felt obligated to go through with it. On future runs there will be a limit of one per customer. I really hope the person who bought so many is not planning to scalp them at a higher price, and I am sorry for not cancelling their order.
Top

rainwarrior wrote:I received a disturbing e-mail today from a buyer complaining that I was planning to make more, because apparently the presumed scarcity was what motivated him to buy it. This seriously offended me, as my goal is to get this in the hands of anybody who wants it at as fair a price as possible. (This is also why I released the ROM and source freely.)

Hehe, welcome to the new generation of NES collectors, everything must be limited edition and if it's numbered too it's the icing on the cake.

But thanks a lot for releasing the rom for everyone to enjoy.
Top

By the way, the person I sold several carts to is currently reselling them on eBay for $125. I don't recommend buying it at this price, unless you really want to have it now. I'm sorry for letting this happen.

It's a bit pricey for my current situation, but perhaps someday

It must be quite sad for you to see such a work of love end up on eBay like this.

I suspect he will find buyers even at his high price. I don't find it sad so much as insulting for this guy to profit from my labour in this way. As I said though, I had the power to prevent this and I foolishly did not. I will be more vigilant in the future.
Top

I think you've done a good job of detailing out what actually goes into making carts. Many people are quick to neglect costs of things such as shipping, tax/tariffs, labels, discrete components, and especially labor.

I wasn't able to buy a cart, but I'm not too disappointed based on your generosity of sharing the files and source. I'm happy to see that you got such great response/support from the community noted by the quick sales. I wouldn't get too worked up about the rarity complaints or re-sellers. You can't please everyone and some people are just jerks. I just hope it doesn't deter you from doing more great work in the future.
Top
Post Reply
28 posts