Lazycow wrote: There're still no tilesets or anims from Zolionline, so I guess it's questionable that we finish the game before the deadline.

You could submit it with wireframe graphics like you're posting here... Just pretend like it's a stylistic choice. It looks awesome from that mind set.

by FrankenGraphics
Yeah, the wireframe is minimalist enough to come across as stylism. You could still get great scores. And there's usually time between the compo deadline and the cart realisation.

by tepples
And there's also time between the volume 4 cart and the planned remix compo, which is about taking an existing entry and improving it.

Funny idea to use grey wireframes only... But then I don't have an excuse anymore if I cannot finish it in time... Uh oh...

by Myask
Or some other free BG tiles on here, like what Twin Dragons did.


And, well, you just need something playable; the compo carts are in some ways the equivalent of software sampler/shareware disks…can always create a fuller game later.

by Lazycow
Yes, using free graphics would be an option, but I don't like this idea very much. It would make the game less unique...

Also, the game can now update sprites in VRAM on the fly when the player morphes. This was needed, because Ling in human form needs 112 sprite images and the wolf and morph images need 112 images, too. Too many to be stored simultanously in VRAM, if you want to have enemies... This is really tricky:
- music is disabled: to free temp ram for exomizer
- OAM updates are disabled: to free ram for 16 sprite images (thanks for the hint, rainwarrior)
- now 16 sprites are decrunched the OAM buffer
- then the NMI code copies 8 sprite images from OAM buffer to VRAM (2 times)
- the last 2 steps are repeated 7 times (7*16=112)
- OAM updates and music are enabled again
There is s short freeze (ca. 0.5 s) when morphing, but it is almost not noticable, because you cannot move while morphing anyway.

And the project has a 3rd member: Cyborgjeff is doing the music
cyborgjeff bandcamp page 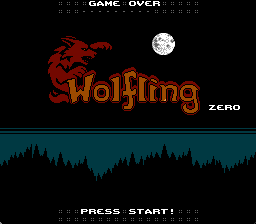 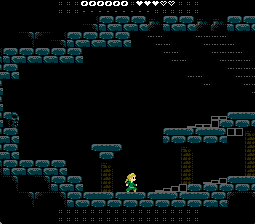 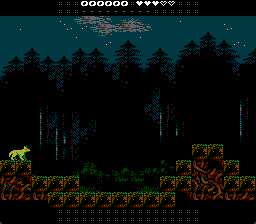 I have build a basic tileset and two testrooms out of Zolionline's mockups: NOW WE'RE TALKING! This feels like a totally different game now.
The project has been renamed to "Wolfling Zero", because I'm to busy to include enough content, except for some kind of "mini-game-prequel".

Also, I have realized, that my "super-smart" idea to stop music to get enough ram for decrunching is GARBAGE, because like this the music stops on every roomchange.
So I had to reprogram the whole decrunching mechanism to allow non-stop music. Much better, but everything's delayed...

by FrankenGraphics
So pretty! Really great work, both of you.

The theme does a lot here, there's no denying it.

by Ryoga
A really good job. The game looks great in the screenshots.

by tepples
At least with all the features colored in on the sprite, it doesn't look like a different character anymore. The hair reads as hair, not a cap.

by FrankenGraphics
Can the player shapeshift freely? I somehow got the notion when you wrote "moonstone" and "potion" that these would be the transformation and reformation items, sort of like how you're restricted in changing abilities in smb 3, which could potentially be a bit of a platforming puzzle sometimes... though, i don't know if that is what you intend to - just a wild guess on my side.

by Lazycow
Yes, indeed. I had the same impression with the grey "hair-hat". My placeholder graphics cannot compete with Zolionline's art... Of course not

Currently, the only way to morph to a werewolf is touching moonrays, which can be found here and there.
And SELECT morphs back. (anytime)
The Idea: Werewolf form is stronger, but cannot go everywhere. (cannot jump as high, cannot use items)
- most enemies are easier to defeat as wolf
- some walls are too high for wolf
- stone doors can only be opened by wolf-attack
- a potion could manually morph to wolf (n.i. yet)

Yes, that's it. I haven't found many puzzles that need human or wolf form so far and I would be happy if you have some additional ideas!


I haven't found many puzzles that need human or wolf form so far and I would be happy if you have some additional ideas!

Some initial thoughts:
-I suppose a moon ray could potentially force ling to transform to wolf. That can serve as both puzzle and lock towards another area. These functional restrictions are for naught if the retroformation is always an option. On the plus side, always being able to morph back grants the level designer some leeway to be able to not take care to trap the player in wolf form. Another approach somewhere in between might be to let wolf acquire the skill (moon crystal?) to morph back at will at some point in the game, thus making previous moonbeam locks/puzzles a blast to pass through (if there's even retracing, that is).

-Likewise, daggers might be an acquired skill. I wouldn't recommend economizing them as ammo, though.

-Is wolf faster than ling and/or has a different acceleration curve? If so, it seems ling can reach higher, but wolf can bridge platforms farther apart on the horizontal plane.

-Is wolfs' hit box lower than lings'? If so, wolf might be able to pass narrow passages ling can't.

-Do both have the same ability to steer (or not steer) trajectory while jumping? Not sure how i would do such a variation useful in terms of platforming, but i thought i'd mention this aspect anyway. EDIT: Well, if she goes off a cliff and is falling, would she be able to reach an alcove in the same direction she came from? How quick might she be able to do that? Same goes for the prospect of scaling an upright wall with little ledges - here wolf is out of question because wolf can't jump high enough.

-Daggers can reach places the player character can't. Thus, daggers may be able to manipulate off-reach interaction points/switches. A variant of this is a special gate that only opens if all enemies have been zapped - just make sure those enemies aren't frustrating to dispose of. You said feature freeze though, so this point is out of scope.