How to do wireless, bluetooth controllers with a NES or SNES

The controllers on 8bitdo are very nice but they won't work with real hardware as is. You'd need to have some kind of receiver that syncs with the bluetooth 8bitdo controller and translates that info to a real NES/SNES input.

The circuit I listed that integrates with a Raspberry Pi (snesbot) should be able to work with 8bitdo controllers. You'd still need to pair the bluetooth signal from the controller to the RPi. But the RPi runs linux so pairing + assigning a command wouldn't be a problem. You'd also need to write a little code or a script that translates the bluetooth input to snesbot. Again not very hard to do.

Anyone have a suggestion on where I can go to get a limited run of receiver boards made?
Top

I was thinking of trying https://oshpark.com/ for some small prototype PCBs.

I've been working on a bluetooth adapter, I really only wanted the virtual serial port though. But I'm thinking of making a board for it in the near future, so I can get away from using a software UART on NES. For the NES interface, I figured I would use a PIC24H, it could use DMA to store the received serial input, while bit-banging the NES interface, so it can transfer 2 bits at a time while handling the clock glitches caused by DPCM. If I switch to using the HC-05 module instead of HC-06, it should be possible to run as a host and connect to bluetooth devices. I only need the serial port interface though, so the other possibilities aren't something I was planning to get into yet. Would anyone want to try that with this kind of hardware?
Top 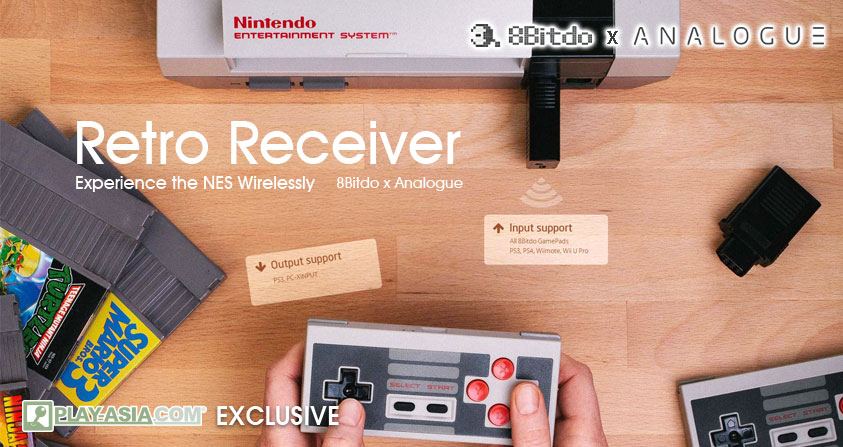 A joint effort with Analogue, 8Bitdo's newest product is clearly aimed for a very specific demographic, however, it doesn't just end there! For those who grew up during the 8-bit era of the Nintendo Entertainment System aka the birth of mainstream console gaming, you'll instantly recognize the seven pinned head on the Retro Receiver For NES.

While wireless controllers for the NES already exist, 8Bitdo's bluetooth dongle aligns itself with the company's desire to give gamers more options; not just content with being able to connect all of 8Bitdo controllers to an NES wirelessly, they expanded functionality to allow the use of PS3, PS4, Wii Remote, and even Wii U Pro controllers to the mix! Powered by the NES controller port, this plug and play dongle will let people play all the classics again, especially if heritage controllers have their wires affected by age.

Analogue Nt and 8Bitdo's collaboration also comes equipped with a built-in CPU and FLASH memory chip with upgradeable firmware, and even offers mulitplayer for two to four players. And true to their style, 8Bitdo has made sure that the Retro Receiver also supports Windows and MacOSX (X-INPUT) via the built-in USB port, making emulation gaming another option with the same amount of controller selection. The Retro Receiver also supports third party retro devices as well, so long as they have an NES controller port, making it compatible with the Analogue Nt and aftermarket retro consoles.

A tiny yet powerful device, the Retro Receiver For NES is truly bringing the venerable NES out of nostalgia and towards the contemporary gaming spotlight, and is exclusively available here at Play-Asia.com.
Top

I like the idea of the 8Bitdo x Analogue adapter, and this mod to a Nintendo-made controller possibly could be made to work with the adapter :
https://learn.adafruit.com/snes-ez-key- ... d/overview

However, my main concern is with lag. How much overhead is all this Bluetooth processing going to put on the NES?

Is there a program that can measure response lag from the controller? Perhaps a controller test ROM could be used and you record the screen with a camera to see how quickly each press is registered. If there is lag, then the camera (presumably recording at 60fps) should show in a frame by frame format how much longer it takes for the Bluetooth controller to register input. I'm sure there are more precise ways to measure it, but would this work?
Nerdly Pleasures - My Vintage Video Game & Computing Blog
Top

Apologies for the necro post, but I was searching for my old Snesbot project and stumbled across this thread.

Yes, it was massive overkill to use a Pi + 4021's + MCP23017, but it was definitely a situation where the 'only tool I had was a hammer and everything looked like a nail'. The one upside was that usng a Pi made development really quick and simple, especially when it came to downloading and feeding in TAS runs into the bot hardware.

I've since decided to make another TAS Bot, this time I'm using a ESP8266 for a couple of reasons:

1. They are dirt cheap and widely available
2. The input pins are +5V 'tolerant', meaning I can cut down on level shifters
3. It being a 'proper' microcontroller compared to a Pi, I'll probably be able to bitbang the controller data out rather than have to use a pair of 4021's.

I'll probably start a new thread with more details of it once I've got something interesting to show.
Top
Post Reply
20 posts