by krzysiobal
Many of nowaday's cartridges that you can spot on aliexpress (like 198-in-1 or 400-in-1 Coolboy), but also single titles or even bootleg ones like Battle Kid are using 3.3V elements without logic shifters (mostly PRG-ROM flash). 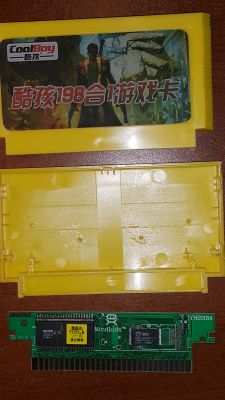 Analysing the datasheets shows, that in "400-in-1" neither of the memories (PRG/CHR) works with proper voltages
In 198-in-1 only PRG memory works out of voltage range Due to dangers dangers of using them in 5V consoles, I constructed this simple adapter. What it does it to convert the following 5V signals from console to 3.3V: CPU D0-D7, A0-A14, CPU-R/!W, M2, !ROMSEL, PPU D0-D7, A0-A13, PPU_!RD, PPU_!WE
all other signals are passed by. There is also switch that allows selecting if the cartridge's socked should get 5V or +3.3V voltage supply (because many of those cartridges have place for installing zener diode but in fact, it is rarely present which results 3.3V elements to be powered directly from 5V)

While all signals except data busses are always enabled, data buses need to be enabled only at certaing memory ranges. The problem with such converter is to decide at which memory ranges to enable them. Normally they should probably be enabled at $4020-$ffff, but that would require advanced address decoder. I just enable it at $6000-$ffff which is suitable for most games (altough, the ones that expect open bus migh not work correctly).

The same problem is with PPU data bus and extendend nametable mapping which potentially would need the ability to enable cartridge's internal memory above $2000. Because those games are also rarely present and probably does not exist in 3.3V versions, I just enable cartridge's CHR memory only below $2000. 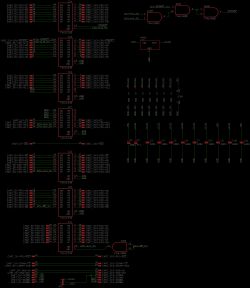 Now, testing the 5V/3.3V power supply switch I surprisingly say that on 3.3V the games freeze very often, while on 5V they works correctly.
So maybe the mapper glob top should be powered with 5V and only the memories with 3.3V? That would indeed require installing the zener diode in cartridge and power the cartrjdge with 5V.

by Fisher
That's great!
Any plans to sell them?
Could you also do something similar to other consoles?

by muramasa
This is great! I've considered doing something similar but an NES version that you could put the game inside a new shell at the proper voltage.

by tokumaru
Having a single device that you can use for all your problematic carts is much more cost-effective than putting one inside each cart. But considering that all carts are designed differently, and some may mix 3.3V and 5V parts, you can't really have a universal converter that'll only convert the correct signals, right?

I think that protecting the console is the most important thing though, so do you think it would be possible to design a device that makes the console 100% safe, regardless of what goes on inside the cartridge?

by krzysiobal
Almost all signals from console are converted (and protected) using buffers. So even if the cartridge would in worst case short circuit them, all that potentially would blow up is just the adapter, console would remain safe.

Now, if applying 5V to the cartridge is not safe, it could potentially in long or short time destroy the cartridge (as it would by just normally plugging 3.3V cartridge into console), but the console and adapter will still become safe.

tokumaru wrote:Having a single device that you can use for all your problematic carts is much more cost-effective than putting one inside each cart. But considering that all carts are designed differently, and some may mix 3.3V and 5V parts, you can't really have a universal converter that'll only convert the correct signals, right?

You could make it DIPswitch controllable. But then you add some cost (not too much?*), and the end user will need a something in the way of a manual. Configuration from game to game is not too bad; just assume conversion on all lines and for the games that freeze, bypass conversion on the one line that causes freeze according to a list of known cases.

*8 bypasses on a single DIP switch should cost 1-4 dollars depending on type; or cheaper if bought in bulk.

by Fisher
I'm interested, but I'm afraid shipping costs + bureaucracy can make it out of reach to me!

by Drew Sebastino
I know we had gone over this, but I don't remember, what's the reason a lower voltage cartridge could damage your NES/SNES/MD/etc.?

by FrankenGraphics
Edit - disclaimer. I don't have a degree in EE. This is just a hobbyists' recollection of the problem.

Basic premise:
NES outputs 5v power and logic. Stuff on the bad cartridge accepts 3.3v. As an inadequate workaround/hack, there are clamping diodes (and sometimes resistors) that may save the 3.3v components short term, but are gradually harmful to both ends long-term.

Part A - excessive heat:
There are typically clamping diodes on the inputs, but when they conduct there's a voltage drop across them. this drop doesn't disappear. energy can't be destroyed or created. Naturally, it is producing heat that may be excessive. That may be harmful to the cartridge components. That's part A. It's a bit hard to tell wether the excessive heat really will amount to any problem, but you shouldn't have to worry about it in the first place.

Part B - short circuits, surge of current:
A clamping diode works like this: If it encounters an excessive voltage, it will "break down" temporarily and start to conduct. That's the intended purpose. This means excessive voltage spikes (the main usage) causes the current to go through there instead, and the diode is tied to the rails in order to function this way (so that the excess has somewhere to be led). In our case, this means the 5v supply is shorted to the 3.3v supply. This causes a surge effect - the output is asked to supply more current than it was designed for. this is harmful to the console logic outputs.

So there you have it. risk of too much heat in the cartridge + risk of wearing down logic outputs in the console.

You can limit the harmful effect somewhat with the help of resistors, but what you really should do is use proper level shifters - so you don't have a problem to mitigate in the first place.

We don't have observational evidence of failure (you need to do burn tests on dozens of units in moderate long term experiments to maybe be able to say something meaningful in that regard), but you should never provide situations that are outside the specs. The theory and the specs are solid enough to refute any anecdotal type of counterevidence (ie "i've been smoking for so long and i haven't died yet").

Note that no single output is the same as the other, there is always some variance in how tolerant they can be. the spec has been set by the component provider (who's also the best source of accurate spec tests since they can and are required to do them) to guarantee safe, error free operation. So usually you might go a little bit off-spec at your own risk in a hobby project if it means no electrical/fire hazard. You should NEVER put others at risk, though, even if the risk is "just" of material loss.


Btw more or less permanent voltage clamping can be used in a lot of applications; it is not necessarily bad in itself. It depends.
All times are UTC-07:00
Page 1 of 1