Hi there, I got my hands on a weird cart that is an unofficial Zanac port from FDS version that was put on a real cart. The symptoms are rather unusual:

1.When you defeat any boss, the floor just gets garbled, looks like it exploded (this doesn't happen in the original game though as I checked it)
2.Whenever you fight a boss and the timer runs out, the game just freezes completely (in the original game, when the timer runs out, it just disappears completely and you fly away from the boss and continue the game)
3.After you complete level 4, the game doesn't progress any further at all, although it should (in the original FDS game, there is a loading sequence after completing level 4 and you still go on)

Since these issues occur, I got this cart for means of potential repair. I checked all the logic chips, although nothing seems to be obviously broken as I checked everything, so unfortunately I think this cart is just "a bad port" and nothing else can be done. Although I still opened this thread and maybe there is someone smart enough that can point out some "issues" and maybe there is some way to reprogram or retrace this cart so it can become functional as it should

I don't have any photos of the symptoms yet as the cart is currently disassembled, although I can take them if needed. Please for replies and potential help. Thanks in advance!!

You are in possession of Whirlwind Manu's port of Zanac (catalogue number LF11). It is a known incomplete and glitchy port. Nothing wrong with your cartridge --- the data matches byte-for-byte the ROM image that we already have (NES 2.0 Mapper 304). You can tell that the game must be incomplete because the combined data on the original Quickdisk amounts to 54 KiB, while the combined size of the two ROM chips is only 48 KiB. The company is known for making incomplete FDS conversions; their SMB2J conversion freezes after world 4-4.

A different port from "Kaiser" (KS-7012), using NES 2.0 Mapper 346, has 64 KiB of ROM and to my knowledge has the complete game. And of course, there is the official North American release.

Thanks, I wasn't even aware of this list and I never knew there exists any sort of database for unofficial FDS port carts. So does this mean there isn't any obvious solution on how to "repair" this cart?? Also, is there any other list that points out all known FDS port carts that have issues and those that are complete and without issues??
Top

The problem is that you only have space for 48 KiB ROM, while the game requires at least 54. Even if you could replace the 16 KiB chip with a 32 KiB one, the bankswitching hardware likely is not going to support that. You'll have an easier time simply making (from scratch) a reproduction of the Kaiser port, which just bankswitches 32 KiB of PRG-ROM at $8000-$FFFF using an address latch in the $Exxx range, and has 8 KIB of WRAM at $6000-$7FFF and 8 KiB of CHR-RAM.

I am actively working on such a list, but it's going to take a lot more time. I am currently stuck trying to make sense of the many different ports of SMB2J, with new ones turning up every time I think I am finished. But feel free to ask about any other FDS conversion. As a general rule, Kaiser's conversions are usually better than Whirlwind Manu's.
Top

What's the reason for porting over a game that already exists in cartridge form? Are there any other major differences in the FDS version aside from the music?
EDIT: Wait, I'm not sure the music is even different - I was thinking of Gyruss

The music is different on a couple tracks, yes -- there's at least two tracks which use a different base octave. I can't tell if there are actual FDS audio features used because 1) the FDS NSF rip I have, for whatever reason, doesn't enable FDS audio in the NSF header (bit 2 of byte $7B is set to 0) and 2) I don't actually own a Zanac FDS disk. I suppose I could bust out the USB FDS RAM adapter I was given + load an FDS dump of the game + figure out how to enable the sound test on the FDS version (on the US/cart release it's easy, not sure about FDS).

I'd be curious to know if there's any actual game behaviour differences though, i.e. things other than just music or minor sprite/graphics differences. Edit: looks like TCRF covers some of the differences. You really have to read the article vs. just skim: https://tcrf.net/Zanac_(NES) . Given the limited differences, I would say the aforementioned "port" was more of a work of personal love/dedication/challenge than "bringing something new to the table".
Top

Bootlegger Whirlwind Manu's FDS conversions were made shortly after the FDS versions and before the official North American cartridge versions were released. Several games, such as Salamander, exist in a bad conversion of the Japanese version and a later release that just takes the North American version, both having the same cartridge code. So they took what they had, and took something else once they could have that.
Top

koitsu wrote:Given the limited differences, I would say the aforementioned "port" was more of a work of personal love/dedication/challenge than "bringing something new to the table".

If that were the case, there are a ton of interesting FDS exclusives out there that would make more sense to have a go at.

I actually have the FDS version of Zanac only because it was cheaper than the US cartridge version, and easier to import.


NewRisingSun wrote:Bootlegger Whirlwind Manu's FDS conversions were made shortly after the FDS versions and before the official North American cartridge versions were released.

Aha! So there's the correct answer.


Several games, such as Salamander, exist in a bad conversion of the Japanese version and a later release that just takes the North American version, both having the same cartridge code. So they took what they had, and took something else once they could have that.

That's interesting considering Salamander was only a cartridge in Japan. I'm assuming it has something to do with the VRC3 IRQs, which is the only unique thing I can see about that mapper?
Top

IRQs and WRAM. Japanese Salamander, for some reason, has and needs 8 KiB of WRAM, while the U.S version is a normal UNROM circuit board and is quite satisfied with the 2 KiB of NES RAM.
Top

If you're looking for a Zanac's FDS version to play on a cartridge, I suggest the Zanac Zanac hack, wich puts both versions on the same cartridge and makes them selectable at boot time.
I'm not sure how faithful is the FDS part, but I've heard it's pretty good.

@NewRisingSun, please advertise your project when it's complete or near complete.
It seems very interesting!
If possible please, put PCBs picture on it.
Top

Fisher wrote:If you're looking for a Zanac's FDS version to play on a cartridge, I suggest the Zanac Zanac hack, wich puts both versions on the same cartridge and makes them selectable at boot time.
I'm not sure how faithful is the FDS part, but I've heard it's pretty good.

Interesting. I think this implies there must be some much more notable differences between the two versions than what TCRF documents.
Top

The PCB looks extremely weird, not only because it has chips soldered on the bottom side (like only in original famicom games), but mainly because there are many:
* vias-to-nowhere (which might be jumpers), weird traces (which also could be jumpers and ned to be cut) 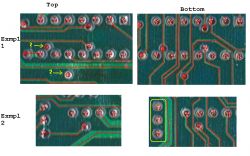 * stupid connections, probably they wanted to make some universal cartridge: 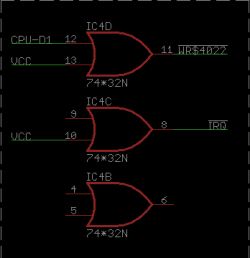 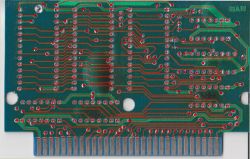 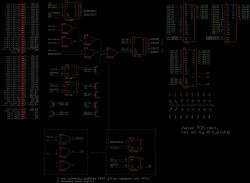